Extraordinary rescue from ends of the earth 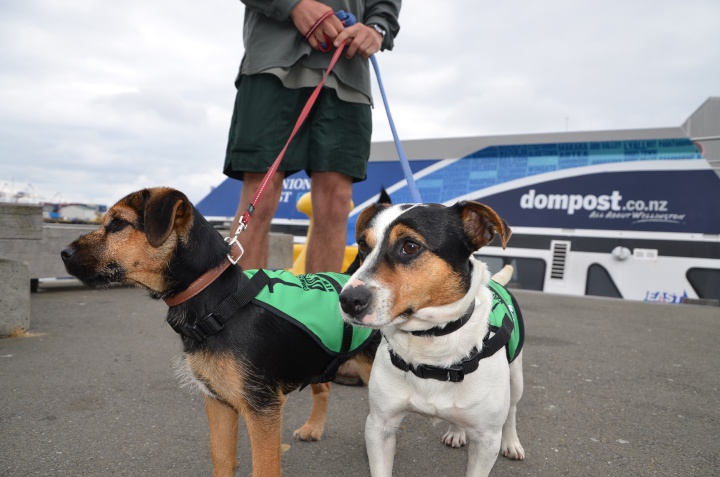 A Department of Conservation conservation dog has been rescued from Campbell Island in the New Zealand subantarctic after being charged at by a sea lion and running away.

Rodent detection dog Flint had been working at Campbell Island as part of Operation Endurance – a logistics support operation between the New Zealand Defence Force and MetService and DOC which supports both agencies management work in the subantarctic islands.

A group of DOC staff were making their way back to board the Royal New Zealand Navy ship, HMNZS Canterbury, when they were charged at by a sea lion on the north east part of the remote island.

During the incident, Flint, a small Jack Russell/Fox Terrier cross, was startled and bolted.

An extensive ground search, with the assistance of the New Zealand Defence Force and the use of their helicopters equipped with thermal imaging technology was unable to locate Flint, who was wearing a muzzle at the time of the incident.

Due to impending bad weather, and a mechanical issue with Canterbury, the difficult decision was made to depart the island at 11pm on November 27.

DOC deputy director general Mike Slater says the right call was made to depart the island.

“While it was heart-breaking for all involved, the safety of all those aboard, which included DOC staff, along with personnel from Metservice, the Navy, Royal New Zealand Air Force, NZ Army, and the Defence Technology Agency needed to be the first priority.”

The focus then shifted to a rescue effort from mainland New Zealand. A helicopter equipped to fly the 660km journey across the Southern Ocean was deployed from Heli Otago.

The helicopter, with three Heli Otago staff on board, departed Taieri near Dunedin at daybreak, reaching Campbell Island at 11am after a refuel at Enderby Island along the way.

Shortly after arrival, the crew located Flint who had made his way across the island and was waiting at Beeman base.

Mike Slater says everyone involved is ecstatic for the happy outcome.

“Conservation dogs play a vital role in our efforts to keep New Zealand islands pest free and we need as many of them as possible as we work towards a Predator Free 2050.

“As far as we are concerned Flint is a team member and so we wanted to make sure we did everything we could to try and find him and bring him home.

“We had offers of assistance from a range of people including NIWA Vessel Tangaroa which was in the Southern Ocean at the time.

“Due to the time sensitive nature of this rescue – with Flint wearing a muzzle and therefore unable to feed himself, we were working against the clock.”

“We’d like to thank everyone involved in this rescue from the crew at Heli Otago, Kiwibank as DOC’s national partner in the conservation dog programme, the Defence Force for the use of their resources, support during the initial search and ongoing support to staff on the ship and everyone else that’s offered to chip in to bring Flint home,” says Mike Slater.

Kiwibank Chief Executive Officer Steve Jurkovich says “we’re beyond delighted that Flint and his handler Richard Johnston will soon be reunited. We’re pleased to have played a part in supporting the incredible rescue efforts to bring him home,

“We’ve been the national partner of the Conservation Dogs Programme for more than 3 years now, and recognise not only the critical work they undertake every day to protect our native species, but the incredible and special bond between handlers and their dog teams.

Flint will arrive into Taieri Airfield today around 5pm, beating his very relieved handler Richard home by a couple of days.