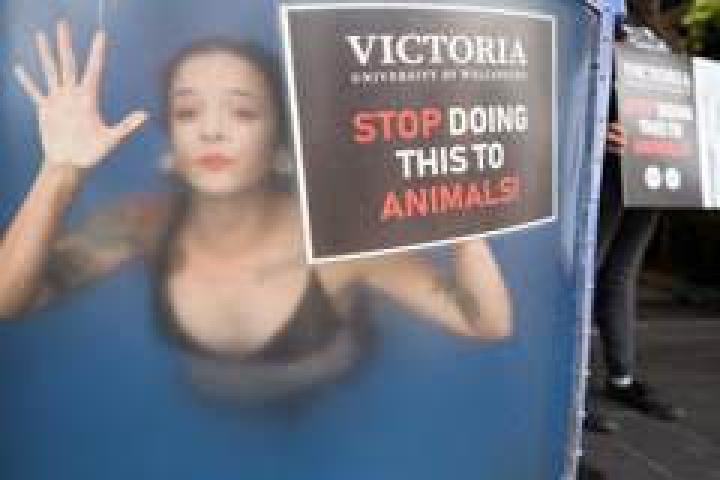 The action that took place outside the LUSH store in Newmarket, Auckland, involved a dunk tank, which volunteers from the LUSH team took turns swimming in to symbolise what animals go through during the cruel test.

This action was part of the New Zealand Anti-Vivisection Society (NZAVS) and animal rights organisation SAFE’s joint campaign against the Forced Swim Test. Despite pressure from students and the wider public, Victoria University of Wellington continues to refuse to end its use of the test.

The Forced Swim Test involves forcing small animals such as rats or mice to swim in an inescapable beaker of water until they ‘give up’ and float. The test reportedly attempts to mimic depression or hopelessness in humans. The dunk tank used today acted as a human-sized beaker, and the demonstration symbolised what the animals go through in this test.

NZAVS Executive Director Tara Jackson says the Forced Swim Test is a cruel and invalid test and its use in New Zealand will not be tolerated by caring Kiwis.

"Imagine someone dropping you into a tank of water that you can’t escape from. This is what the Forced Swim Test does to small animals, and today we highlighted that," says Jackson.

"LUSH is well known for its firm stance against animal testing. LUSH Cosmetics Australasia have now added their voices to our campaign and together we’re sending a loud message to the decision makers at Vic Uni."

Earlier this month recently elected City Councillor Tamatha Paul, writing in her capacity as the President of the Victoria University of Wellington Students Association (VUWSA), penned a letter to the Victoria University Animal Ethics Committee calling for them to end the university’s use of the Forced Swim Test. In her letter, she outlined how use of the test reflects poorly on the institute and is contrary to the University’s progressive values.

SAFE spokesperson Nellie Lyon says, "We look to our tertiary institutions to provide leadership on progressive issues. We expect them to make decisions for the benefit of the public good. Ending the use of the Forced Swim Test is the right thing to do."

Over 16,000 people have sent a message to decision makers at Victoria University asking that they immediately ban the use of the Forced Swim Test. NZAVS and SAFE, supported by LUSH, are encouraging people to take action and send a message to the University: nzavs-take-action.co.nz

Gordon Campbell: On Why Attack Isn’t Our Best Means Of Cyber-Defence

This morning’s news that the SIS engaged in attacks on the Indian High Commission and Embassy of Iran during the late 1980s/early 1990s should come as no surprise. Down the years, there’s been an Orwellian tendency to depict the role of our spy agencies as re-active, and being all about the provision of “defence” and “security” here at home. In reality, that’s not what they’re about. Regularly, our membership of the Five Eyes alliance has seen our spy agencies act as willing guns for hire for whatever contract work that MI6 or the CIA may have in mind... More>>