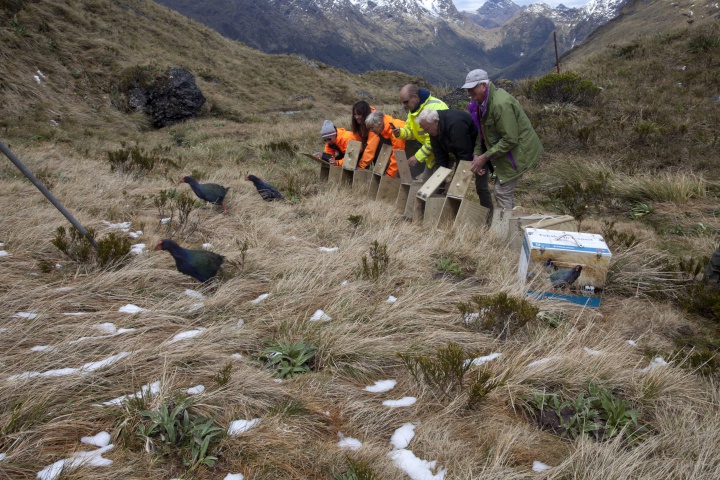 The ‘no vacancy’ sign is going up at the takahē homeland in Fiordland’s Murchison Mountains this summer as it becomes full with the Department of Conservation’s release of a record 41 takahē.

The 41 takahē will bring the Murchison Mountains Special Takahē Area to its estimated carrying capacity of 190-200 birds.

As more takahē are released into this area of Fiordland National Park, the population will spill into adjoining valleys.

The takahē joining the Murchison Mountains population this summer are being released in two groups, with the first 26 released this week and the other 15 to be released in January.

DOC Takahē Recovery Team senior ranger Glen Greaves says, “The Murchison Mountains has been considered the home of takahē since their rediscovery there in 1948 yet maintaining a robust population at this site has been challenging. Achieving this, while also growing takahē numbers elsewhere, is a true measure of the success of our takahē recovery work.

“After battling for decades to bring the Murchison Mountain population up to its natural limit, maintaining these numbers would be a huge reward for takahē staff past and present, and for our partners Ngāi Tahu and Fulton Hogan, and our supporters.

“We look forward to future surveys showing that takahē have once again occupied long vacant territories around the Murchison Mountains.”

The overall takahē population passed the 400 mark this year. A second wild takahē population is being set up in Kahurangi National Park with takahē first released there in early 2018. Its population has grown and takahē numbers at island and mainland sanctuaries are also growing.

“With the overall takahē population growing at more than 10% a year, other suitable sites with low predator numbers for new wild populations need to be found,” says Glen Greaves.

“The Takahē Recovery Team will work with Ngāi Tahu in the coming year to identify and assess potential sites within the takahē’s natural South Island range.”

The Takahē Recovery Team also this month is searching for takahē in areas north and west of the Murchison Mountains where hunters, helicopter pilots and trampers have reported seeing takahē over the years.

“Those takahē could be from 56 birds DOC released in the adjoining Stuart Mountains in the early 1990s but they also possibly could descend from the original wild population found in 1948,” says Glen Greaves.

“We will look for takahē sign which could include signs of feeding like broken tussock and faeces - takahē poo is very distinctive and they produce a lot! Recorded takahē calls will also be played to see if there is any response.

“Finding the takahē will give us better information about the extended takahē population in Fiordland but also they could add more genetic diversity which gives the species the best chance of adapting to new challenges, such as climate change or disease.”