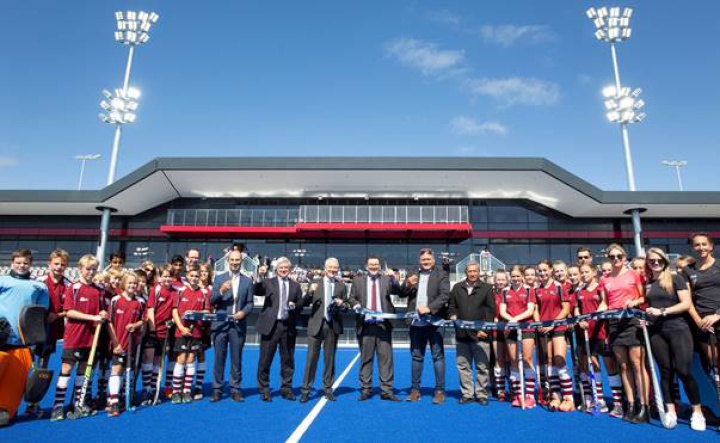 Minister of Sport and Recreation, Grant Robertson (centre) leads the ribbon-cutting at the opening of the new North Harbour Hockey stadium


The world class National Hockey Centre at Rosedale has been built for North Harbour Hockey as part of the Northern Corridor Improvements project. The centre will not only be the home for North Harbour’s 8000-strong hockey community, it will also be the training base for the Vantage Black Sticks teams on Auckland’s North Shore.

The $75M facility is the last of three sports facilities that have been relocated and improved in the area, as part of the NCI project.

North Harbour Hockey is scheduled to move into the facility at the end of the year, ready to co-host New Zealand’s first FIH Pro League matches in February 2020.

“We’re extremely pleased with how it’s all come together as we’ve been able to meet the hockey deadline. It’s a great new facility for the sport and its completion will ultimately help our motorway construction schedule as we can now use the land occupied by the old hockey centre.”

“This facility will assist in bringing in more visiting teams and supporters to Auckland. It has been built to enable the hosting of local, national and international competitions and events. We have invested in this now so that the sport can continue to grow through the development of players of all ages and levels,” says the Minister.


A group of young representative players turned out to shoot goals with the Vantage Black Sticks players on the new international hockey turf. Four new turfs have been built, two of Global Elite and two of national standard.
Harbour Hockey Charitable Trust Chair Peter Felstead, says the brand new pavilion building will be a hockey hub of excellence, for both North Harbour and the wider Auckland region.

“As one of New Zealand’s largest hockey communities, we have been bursting out of our existing pavilion for several years and this facility was always planned to accommodate the growth of participation in hockey and sport in general. Thanks to support from our funders, now we have been able to upgrade to make it a larger facility, which future proofs us for generations to come.”

Mr Felstead says other features include floodlighting, covered seating for 450 spectators as well as 370 new carparks. A new walking and cycling bridge and shared path has also been completed to connect communities to Rosedale Park.

The Transport Agency worked with three sports organisations affected by the Northern Corridor Improvements project and Auckland Council and the local community. The proposal to relocate the three clubs was approved in December 2017. A new North Harbour BMX facility was completed last year, and a new equestrian centre was opened at Wainoni Park in April.

Construction of the hockey centre started in April 2018 and has been delivered by the Transport Agency together with partners Harbour Hockey Charitable Trust, Auckland Council and the Upper Harbour Local Board.
The completion of the facility enables the construction of the new motorway route on State Highway 18 to progress
.
The Northern Corridor Improvements project will provide a much needed transport upgrade for the whole Albany and North Harbour community. It includes over 7kms of new walking and cycling paths, a new motorway connection between SH1 and SH18 and will open up access to the Western Ring Route and travel to the airport.