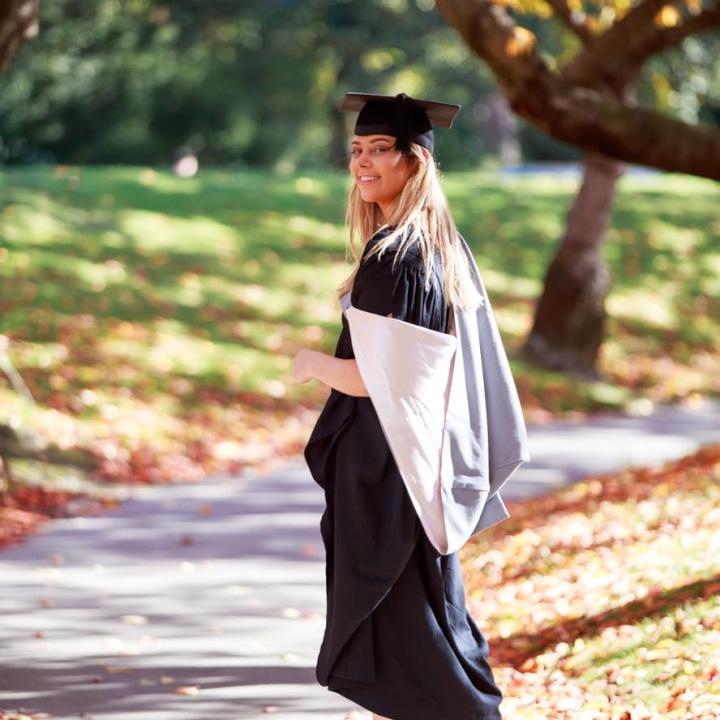 A day at the office can mean interviewing gang members or quizzing politicians for young journalist Katie Harris, who loves the excitement of her job.

Katie, who grew up in Hillsborough, Christchurch, has just won the DW Bain Prize as the top student in this year’s University of Canterbury (UC) Postgraduate Diploma of Journalism class.

Her undergraduate degree at UC was a Bachelor of Arts and she went to school at Middleton Grange.

Katie has already found work as a journalist for New Zealand Media and Entertainment (NZME) at Newstalk ZB in Wellington, and in January she will travel to Jakarta, Indonesia to work for six weeks after being awarded a media internship through the Asia New Zealand Foundation.

“I knew I wanted to be a journalist as soon as I started studying Media Communications at UC,” she says. “I don’t know what other job I could do because I think I would get bored. This job is always changing and it’s always exciting. It’s definitely a tough industry but it’s good.”

UC Media and Communication Senior Lecturer Tara Ross says Katie – who broke a story about the first all-female chapter of Waikato’s Mongrel Mob Kingdom while she was still a student - was outstanding from the beginning.

“She stood out early for her curiosity, drive and hunger for news. She was unafraid of tackling hard stories and, I don’t doubt, can go far in journalism.”

Katie is drawn to “hard news” and first made contacts with Mongrel Mob Kingdom members from Hamilton when they came to UC to give a lecture to Criminal Justice Programme students in September.

Katie says the Postgraduate Diploma of Journalism course helped prepare her for the current multi-media world of journalism. “It was very practical. It definitely requires a lot of passion because it’s really full-on, but I loved it.

“I was never really an academic person before but I feel like I’ve found my niche and it shows anyone can succeed at what they do if they find something they’re passionate about and they work hard.”

Her dream is to one day work as a foreign correspondent and, with that in mind, she has been learning Arabic in the hope that she might one day be based in the Middle East.

She spent a month in the Czech Republic in August 2018 studying a paper in foreign correspondence journalism.

The adventurous young woman is also a keen surfer and she edited a youth magazine launched earlier this year called Yo, Vocal.