A stomach full of plastic is a likely cause of death to a juvenile toroa/southern royal albatross, an autopsy has found. 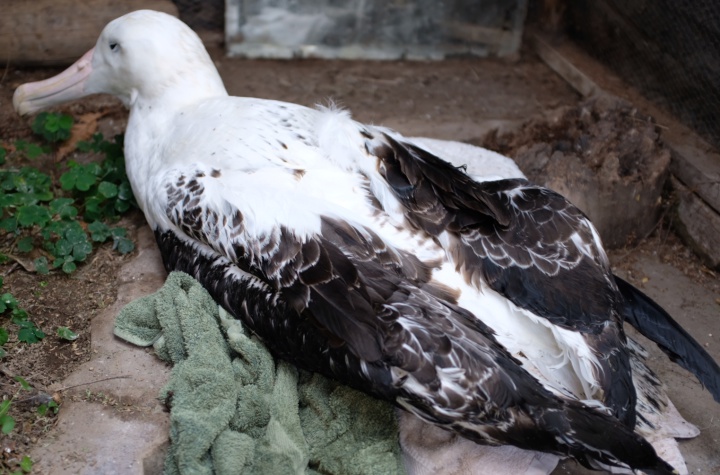 The Department of Conservation (DOC) says the bird was found in an emaciated condition by members of the public at Whirinaki Beach just north of Napier . It was taken to Wildlife Base in Palmerston North where, despite close attention and care, it died two days later.

An autopsy of the toroa by Massey University found a flattened 500ml plastic bottle in its stomach, as well as fragments of a balloon. The results of the autopsy suggest starvation was a likely cause of death, with the plastic items obstructing the stomach and likely causing pain.

Chris Wootton, DOC Hawke’s Bay Senior Ranger Community, says “Toroa can live for around 40 years, so this is a very tragic and premature ending to this young bird’s life.”

Although toroa are known to frequent Te Matau a Māui/Hawke’s Bay, they are offshore feeders.

“They’re rarely found near land, which is just a further indication that the bird was unhealthy. We’re very grateful to the members of the public who sought help for the bird when they found it,” says Wootton. This is not the first example of toroa being affected by plastic in New Zealand. Fragments of plastic have been found in the regurgitation of fledging northern royal albatross chicks at the colony at Pukekura/Tairoa Head in Dunedin.

“In the 2018/19 breeding season, we collected the regurgitations of northern royal albatross chicks and plastic fragments were found in 14 of the 16 regurgitations. This plastic has been consumed at sea by the parents and then fed to the chicks in the colony at Pukekura/Taiaroa Head and included items like branded bottle lids and infant formula scoops,” says Sharyn Broni, DOC Ranger based at Pukekura/Taiaroa Head.

Plastic is a major emerging threat to seabirds globally, with 90% of all seabirds having eaten plastic. This plastic can’t be digested and sits in the stomach, and sometimes leads to death by dehydration or starvation.

“Every year, millions of tonnes of plastic make it into oceans, in addition to the plastic already circulating. Albatrosses and other seabirds can be tricked into eating plastic. Sometimes it can look like food, and the algae that grows on it in the ocean can also make it smell like food is near,” says Sharyn Broni.

“Finding plastic in seabird’s stomachs is not uncommon, and this toroa in Hawke’s Bay is evidence of the real impact it is having on New Zealand’s species,” she says.

The body of the toroa will be returned to Ngāti Tangoio, the local iwi near Whirinaki.

“The toroa is a taonga species so it is pōuri (devastating) that this one did not survive. Its death could be seen as a tohu (warning) to remind us humans of our kaitiakitanga responsibilities. We all need to address the plastic pollution in our moana," says James Lyver, Kaiwhakahaere Matua General Manager of the Maungaharuru-Tangitū Trust.