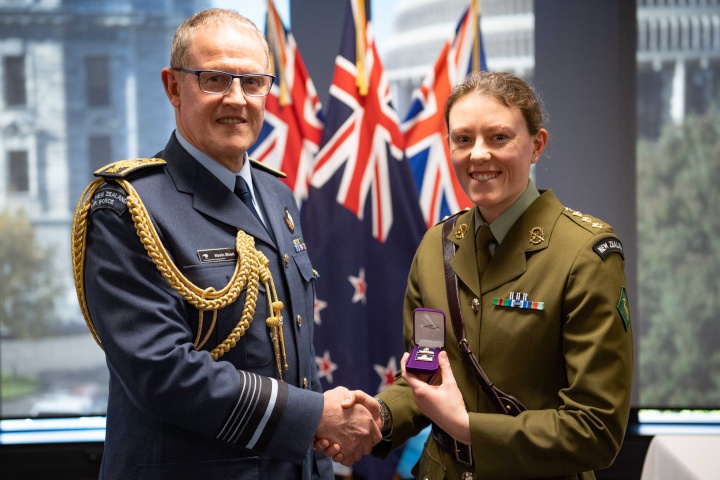 
Wellington woman Penny Roy is a teacher by trade but has been recognised by the New Zealand Defence Force (NZDF) for the role she played in mentoring officers at the Afghan National Army Officer Academy in 2018-19.

Captain Roy, a Reservist with the New Zealand Army, was presented today with a Chief of Defence Force Commendation by Chief of Defence Force Air Marshal Kevin Short at a ceremony in Wellington.
While in Afghanistan she was responsible for providing professional development, coaching and training advice to staff of the academy.

Her citation said Captain Roy was the only female mentor initially tasked to support efforts to integrate females into the Afghan National Army Officer Academy.

“She quickly assessed the environment and saw opportunities to exert greater levels of influence on the male leadership beyond the overarching integration framework,” the citation read.

“One strategy was to have fellow mentors engage Captain Roy to role model their Afghan counterparts in equity and diversity, thereby demonstrating that female colleagues can play an equal and leading role in the affairs of the academy.

“Captain Roy clearly understood the challenges she faced in seeking to overcome prevailing Afghan male attitudes towards women. She set about delivering her engagement plan to raise the level of leadership competence of the three company commanders and, in doing so, developed a series of innovative approaches that encouraged the Afghan commanders to identify their own strengths and weaknesses.

“The results of her endeavours were noticeable, with significant improvement in training design and delivery by the Afghan commanders, which improved learning outcomes for the cadets.”

Captain Roy, who grew up in Karori and went to Wellington Girls’ College, said she was honoured to receive the award.

“You go on deployments to do a job and you aim to do it to the best of your ability, and I certainly didn’t expect to be rewarded for that.

“Ultimately it was a team effort – my command team gave me the freedom to conduct myself the way I thought was most beneficial to the mission.”

She joined the New Zealand Army as a Reservist in 2011, eager to embrace a career that would provide continuous challenges plus the opportunity to serve her country at home and overseas.

“I was also attracted by the fact I would always be learning new skills and would be serving with like-minded people,” she said.

She was commissioned as an officer in 2013 and from 2017-2019 was a full-time member of the Army, serving in 2nd/1st Battalion of the Royal New Zealand Infantry Regiment.

It was during this time that she was deployed to Afghanistan, which has been her career highlight so far.

“That is what we train and work so hard for – to ensure we contribute above our weight in the international arena,” she said.

She is currently working in Christchurch as a teacher at Cashmere High School, while still actively contributing to the NZDF as Adjutant of 2nd/4th Royal New Zealand Infantry Regiment.

“My role as the Adjutant is self-directed, so I just fit in my Army work around teaching, at night or on the weekend. I also attend Wednesday night parades with A Company and then participate in weekend activities when required.”