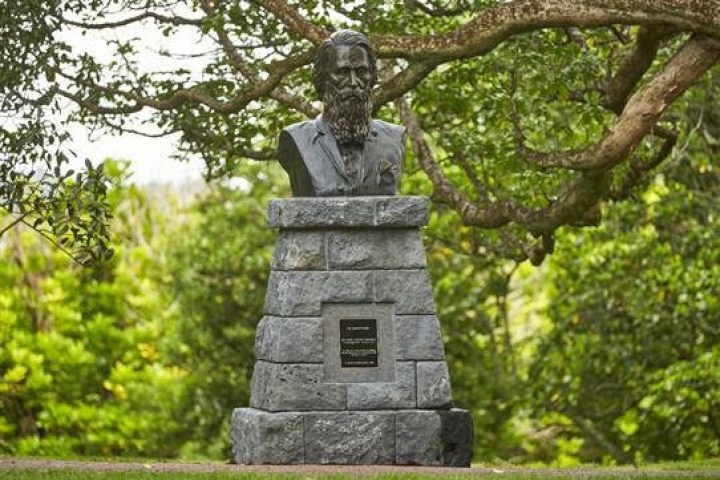 Cornwall Park, one of Auckland’s most treasured locations, has gained a double life-sized bronze bust of Sir John Logan Campbell, the philanthropic businessman who gifted the land to the people of New Zealand over 100 years ago.

Standing at 3 meters tall, the intricately detailed bronze sculpture of Sir John Logan Campbell took portrait and figurative sculptor Shona Lyon four months to bring to life. With a limited number of grainy photos from the late 1800’s to work from, the biggest challenge for Lyon was transforming Sir John from an old one-dimensional photograph to a 360-degree sculpture.

For Lyon, having the chance to bring one of her most admired people to life has been an incredibly humbling experience. “I’m very grateful. This is a way for us to give back to Sir John in thanks for his donation of Cornwall Park to the people of New Zealand – a place that has given us so much.” 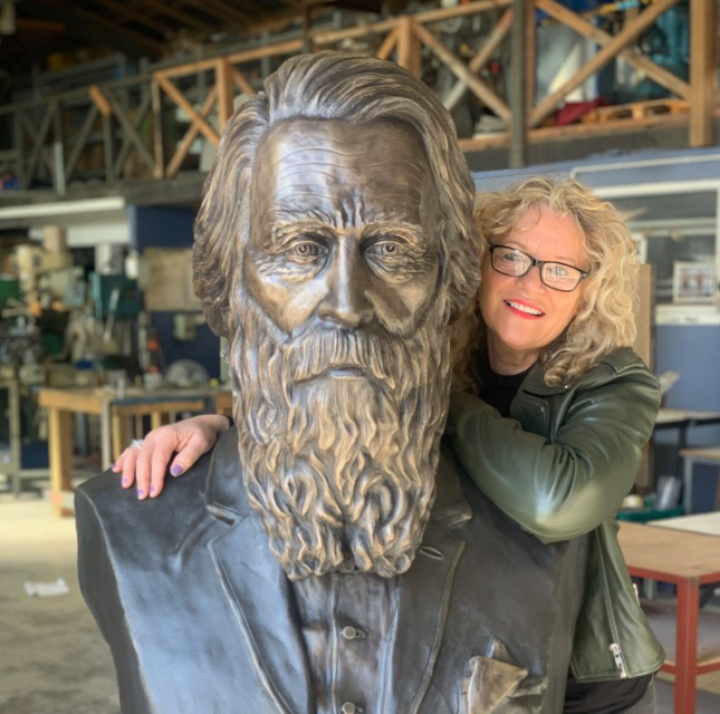 Growing up in a house that backed onto the expansive greenery of Cornwall Park, Shona Lyon speaks of being equally ecstatic and nervous to create the sculpture of Auckland’s founding Father. “My family has lived in the Greenlane area for the past five generations, so I was both incredibly humbled and incredibly anxious to bring Sir John to life – it was the perfect opportunity to pay my respects to a man who helped to shape the Auckland City we know today.” The Lyon family commissioned the sculpture of Sir John with this history and significance in mind.

Listening to music from the late 1800’s helped Lyon to connect with Sir John’s character as she sculpted. She read books about his life and poured through the photographs of him available in order to channel as much of his personality into the sculpture as possible.

Born in 1817 in Edinburgh, Scotland, John Logan Campbell emigrated to New Zealand at the age of 23. One month after arriving in New Zealand, Sir John lived with Ngāti Tamaterā iwi in Waiomu, Coromandel, during which time he developed a deep respect for Maori society. He then founded a highly profitable trading, importing and auctioneering company named Brown & Campbell Co, the success of which eventually extended and deepened his business influence across Auckland.

Sir John founded Auckland’s first school of art, and served on more than 40 committees, boards, trusts or directorates. No ceremonial occasion in Auckland was complete without his presence. In 1901, at the age of 83, Campbell gifted 425 acres of One Tree Hill to the people of New Zealand, renaming it Cornwall Park.

Prior to this, the site had long enjoyed an important place in the life of the isthmus. Established as major pā in the 1600s, Maungakiekie, which rises above the Park, was later surrounded with extensive gardens feeding up to 5000 people. It became the main pā of Kiwi Tamaki, of Ngāti Whātua, in the mid-1700s, before passing to European ownership in the late 18th century.

Michael Ayrton, the Park Director of Cornwall Park, says the Trust Board are delighted with the sculpture. “It is now 200 years since the birth of Sir John Logan Campbell, and this is an appropriate way to acknowledge him and his tremendous gift of Cornwall Park to the people of New Zealand.”

Sir John ensured Cornwall Park would remain open for the public to enjoy long after his death. His wish was that the park be free for every New Zealander to enjoy, forever. He set up a charitable trust to manage the park, making sure there were enough sources of revenue to keep it going, and employed caretakers and farmers to maintain the land.

To this day, Cornwall Park serves as an oasis in the heart of Auckland City – it is a hub of social and physical activity, weaving together our heritage, ecology, agriculture, and community within its lush landscape. Sir John Logan Campbell’s statue is located just down from the Cornwall Park Bistro and Acacia Cottage.

Shona’s new studio and gallery is now open in Coatesville, and will be open for viewing by appointment in early 2021 – visit www.shonalyon.com for more details.

About Shona Lyon:
Shona Lyon is an Auckland based artist specialised in figurative and portrait sculpture that presents a careful balance of mood, tension and grace. Bronze is her primary medium, though she is also adept in various other media. Lyon's sculptures are based on the principles of sacred geometry and classical sculptural techniques.

For Lyon, fine art was a calling later in life. Sculpture was her medium of choice, and under the tutelage of international sculptor, Martine Vaugel (a Master Sculptor and two-time Rodin award winner) Lyon developed her own style and processes. Lyon now works as a full-time sculptor, producing a range of work from small collectible sculptures through to large scale public and private commissions.