Cantabrians are invited to mark the 10-year anniversary of the 22 February 2011 earthquake with a free visit to Quake City, Canterbury Museum’s special exhibition about the Canterbury Earthquakes. 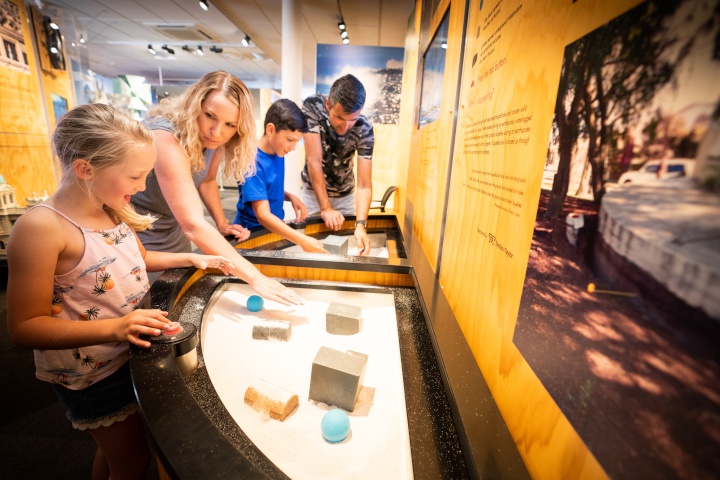 Visitors test out the liquefaction simulator at Quake City

Thanks to support from Major Sponsor the Earthquake Commission (EQC), admission charges to Quake City will be waived on 22 February.

Quake City has had some updates ahead of the 10-year anniversary. Additions include a sculptural wall of orange road cones in the entryway and a slideshow of buildings, artworks and streetscapes showing how Ōtautahi Christchurch has changed in the decade since the earthquakes.

A number of Cantabrians who recount their experiences on 22 February 2011 in the film 12.51, which runs in the exhibition, have been reinterviewed and feature in a new short film reflecting on how their lives have changed in the last decade.

Museum Director Anthony Wright hopes Cantabrians take up the opportunity to visit Quake City and reflect on the decade since the February quake.

“The February quake was a tragedy that continues to affect the lives of Cantabrians, so it’s important that we have a place to tell the stories of the earthquakes and appropriate that we mark the 10-year anniversary with free entry. Quake City has some sobering reminders of what we lost in the earthquakes, but also of the challenges we overcame by pulling together.”

Mr Wright says EQC’s sponsorship is not only enabling free entry on the anniversary, but has also helped us to refocus Quake City on the domestic market after losing 80% of its visitors from overseas, due to Covid-19 travel restrictions.

EQC’s Chief Resilience and Research Officer Jo Horrocks says that building knowledge and resilience in the community is a key focus for EQC.

“And Quake City is terrific example of educating New Zealanders about the natural hazards our country needs to manage.”

In December, the Museum launched a new website for Quake City with support from EQC. The website highlights what visitors can see and do at Quake City, as well as providing practical information about ticketing and how to get there.

Quake City was devised in response to high interest from leading business and community groups to having a permanent earthquake exhibition in Christchurch, following Canterbury Quakes, a temporary exhibition held at the Museum in 2012.

The exhibition is a significant example of the Museum’s role in the community as a kaitiaki (guardian) of Canterbury’s history and taonga (treasures) and to the stories that shape the social and natural history of the region.