New Zealand's Most Beautiful Large City, Not Without Effort

Donny Park in Chartwell recently played host to the first Keep Hamilton Beautiful Clean Up event for 2021 where 38 Hamiltonians got together to do their part to help clean up our city. 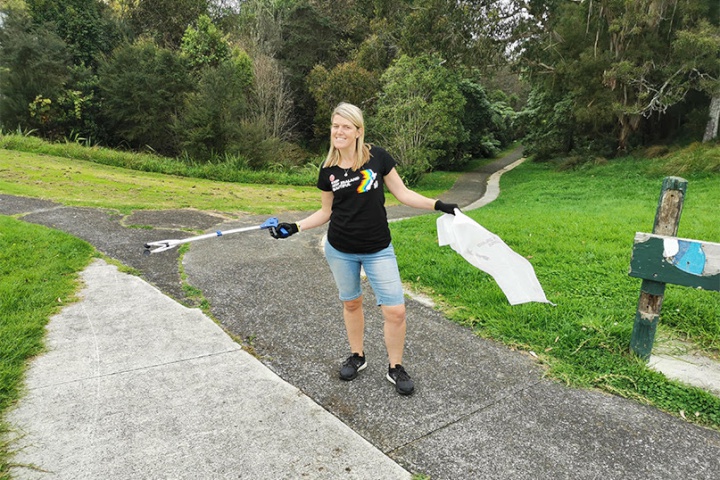 The event was organised by Anna Petchell, who is heading the newly created Hamilton branch of Keep New Zealand Beautiful. Petchell, a career transition coach, may be known to some for her voluntary efforts picking up rubbish around Hamilton since her return from life abroad.

“I’ve spent a fair bit of time overseas, working in the yachting industry on boats and in ports. It’s there where I began picking up rubbish to help make a difference in countries that I believed were worse off than New Zealand, well at least that’s what I thought.”

On her return to New Zealand during the COVID-19 pandemic, Petchell quickly realised that New Zealand wasn’t any better. That’s when she began picking up rubbish around the streets of Hamilton with support from Hamilton City Council which assisted by disposing of rubbish free of charge.

Reflecting on what was the first of several planned clean up events, Petchell was really impressed with the turnout on the day and the progress made.
Groups of friends, families and even those who came by themselves, all banded together like they had known each other for years tramping around the park picking up rubbish.

“Every small bit counts towards making this world a cleaner place – that was really clear to see with so many awesome people showing up to pick up rubbish in their own time. What’s maybe not so impressive is the amount of rubbish we pulled out of the park.”

In 90 minutes, 1250kgs of rubbish was recovered from the pathways, gullies, and green areas of the park and thrown into a 9m2 skip donated by Purposefill Skips.

“Carting the rubbish up the path to the skip was made easier by the 16 trolleys found littered throughout the park,” said Petchell.

Along with shopping trolleys and general waste, the team picked up items of clothing, bedding, camping equipment, plastic zip-lock bags, metal poles and used tyres – all things that could have been reused.

The team weren’t thrown in unarmed, nor did they go home empty handed. Vison Complete Earthworks donated gloves and rubbish pickers to keep our Hamiltonians clean and safe, and Sunny Nelson Ice Creams donated 50 ice creams as a small gesture for all the hard work.

“Our green spaces are really important to people in our city and one of the reasons we won New Zealand’s Most Beautiful Large City Award last year. We can all play our part in keeping them free of rubbish,” she said.

This year’s New Zealand’s Most Beautiful City Awards will be held in Auckland on Thursday 28 October 2021.

If you’re interested in future clean up events, go to Keep New Zealand Beautiful Hamilton’s Facebook page to see when and where the next event will take place.