One of the newest residents at NPDC’s Brooklands Zoo is looking forward to returning to the wild shortly. 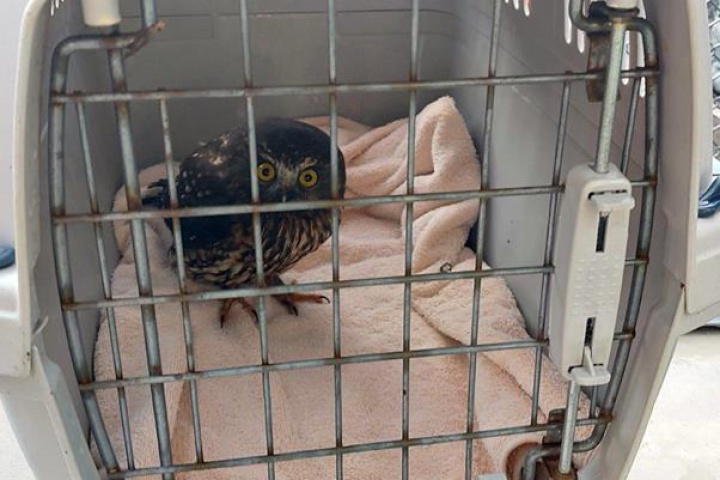 The tiny ruru (morepork) was found and rescued near Stratford last month after it was hit by a car.

The ruru is recovering from a concussion, but is expected to be released near where it was found in the next few days.

“The release is the best part: seeing a native bird go back into the wild, knowing you’ve played your part in getting it there,” says Eve Cozzi, NPDC Brooklands Zoo Lead.

“They’re such beautiful birds – each has a different personality. Some look at you and go really tall and skinny, while others will puff themselves up into a ball.”

Brooklands Zoo has a DOC permit that allows its keepers to temporarily care for injured native birds such as ruru, kereru and tui, as well as native reptiles while they rehabilitate. The zoo can also take in orphaned juvenile birds.

In the year to the end of April, they cared for two ruru and one kereru, but their busiest year was 2017/18 when they looked after 12 birds. Most birds need help with concussions and fractures after colliding with cars or windows, but others have been injured by cats or have been stuck in parapara trees (also known as bird-catcher trees).

About 113,000 visitors pass through Brooklands Zoo every year, but the injured native birds are kept out of the public eye and cared for by NPDC’s specially trained zoo staff until they’re well enough for release.

Zoo staff recreate forest-like environments for the birds to rest in and regain their strength. They also monitor the birds’ flight ability and track their weight to make sure they’re eating well and will be healthy enough for release.

Anyone who finds an injured native bird or reptile should contact DOC. The zoo can take in only those natives delivered by DOC or the New Plymouth Vet Group.

So far, the horse race journalism surrounding the polling rise of the Act Party has not included much consideration of the policies an Act -influenced government would pursue. During this honeymoon phase – giddily, David Seymour is being asked whether he is now the real leader of the Opposition – Act is being given free rein to present itself as all things to all people. For now, Act is the hitching post for almost everyone with a grievance. According to its leader, Act is the party that listens, and responds with can-do solutions... More>>

National: Launches Plan To Open New Zealand Up
Leader of the Opposition Judith Collins today launched National’s comprehensive plan to tackle Covid-19, end lockdowns and reopen New Zealand to the world. Titled ‘Opening Up’, National’s plan outlines a pathway to avoid nationwide lockdowns and then allow most fully vaccinated travellers to and from New Zealand... More>>