Safer Highway Speed Limits For Milford Sound/Piopiotahi From Next Week

New safer permanent speed limits are just around the corner on a 19km stretch of SH94 from the Homer Tunnel to Milford Sound/Piopiotahi.

“We want to prevent people being killed or seriously injured in crashes on this steep and challenging section of SH94,” says Waka Kotahi Director of Regional Relationships, James Caygill.

“No matter what causes a crash, speed is always a factor in the severity of crash outcomes. No crash resulting in death or serious injury is acceptable, so it’s important we take every opportunity to address the risk,” he says.

The change is part of a Waka Kotahi initiative identifying highways where lower speed limits could make a big difference in saving people’s lives, and where communities are calling for change. Southland District Council and NZ Police both supported these safer permanent speed limits.

Consultation with iwi, the communities and business operators in Milford Sound/Piopiotahi and Te Anau, residents along the route, road users and stakeholders started about 18 months ago.

Between 2009 and 2018 there were 76 crashes between the eastern entrance of the Homer Tunnel and Milford Sound/Piopiotahi. These claimed three lives and seriously injured eight people. Around 40 percent of the 76 crashes occurred in the 2016 and 2018 period, when traffic volumes were high, driven by the pre COVID-19 tourism boom*.

There were 47 submissions received on the speed consultation proposal. These were analysed and considered alongside safety assessments.

“As well as these speed changes, Waka Kotahi has made other major safety improvements over the last three years including bridge widening, safety barriers, and curve signage,” he says. 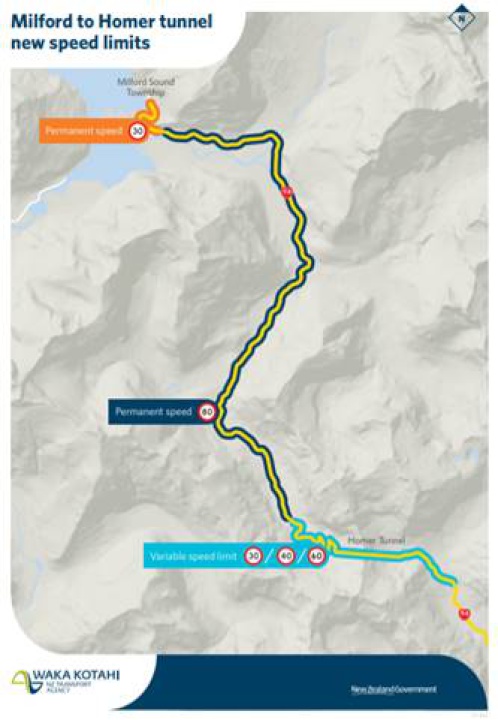