Kete-like Tiles Set To Be Baskets Of Sea Life

Special concrete tiles with a woven surface reminiscent of harakeke kete are being attached to the new rock embankment at the southern end of Te Whanganui-a-Tara (Wellington Harbour) to help marine life establish there. 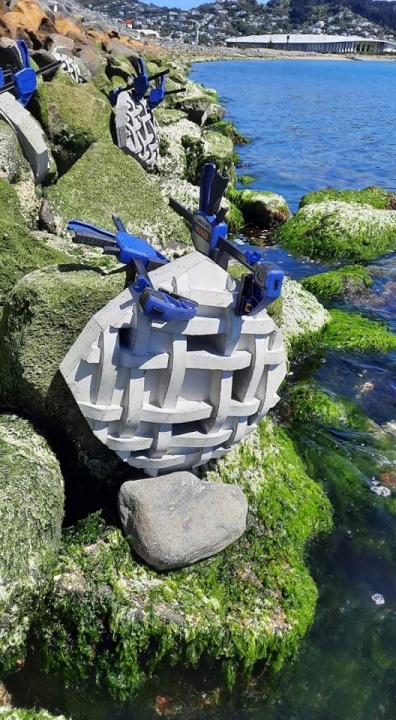 Four of the ecological tiles are already in place to test fixing methods, and another 36 are being manufactured locally to go in soon.

The installation of the tiles is one of several things that have been done in tandem with developing new bike and walking paths to improve the reclaimed area and gateway to the city. The Wellington City Council project also included the removal of more than 400 truckloads of old demolition materials.

Similar types of tiles have been successfully installed on seawalls in Sydney and Singapore in recent years, and trialled in Auckland as part of the World Harbour Bivalve Restoration Project. However, this is thought to be one of the first times this technique has been implemented on a larger scale in New Zealand as part of a permanent project.

It will also be a chance to trial the approach in an area that experiences strong wave action.

The tiles provide rougher surfaces, edges, crevices and water-retaining holes on artificial structures, similar to those that occur on natural rocky shores, and will help increase biodiversity between the low and high tide zone.

Taranaki Whānui trustee Holden Hohaia says before earthquake uplift and extensive land reclamation in the area, what’s now Rongotai and Kilbirnie was part of the sea. It was the tidal area and Te Awa-a-Taia channel that used to separate Te Motu Kairangi (Miramar Peninsula) from the area that is now Hataitai.

“It’s great that as we develop Tahitai – the walking and biking connection from the east – we have been able to clean up this area, remove demolition materials from the seabed and foreshore, and find ways to protect and encourage sea life growth.

“Kete, traditionally woven from harakeke, are used to gather kai moana,” he says. “It’s hoped the woven structure, shapes and cavities in these concrete tiles will in time perform a similar function, effectively becoming little baskets of sea life.”

The concrete tiles are being manufactured locally by Hutt Concrete Products and were designed by Isthmus with ecological and engineering guidance and specifications from Tonkin and Taylor.

The remaining tiles will be attached to rocks between the Calabar Road and Troy Street roundabouts in the inter-tidal zone at mid to low tide. This installation phase will happen early next year.

Ecological enhancement plans for the 430m-long rock revetment, developed by Tonkin and Taylor ecologist Susan Jackson, will also include using drilling equipment to create holes, crevices and indentations in some of the rock rip-rap.

The two approaches will be monitored by Greater Wellington Regional Council in collaboration with the Victoria University of Wellington to see whether they encourage the growth of native marine species and how they perform in comparison to parts of the rock revetment that are left as they are.

Susan Jackson says ecological enhancements, such as those going in at Cobham Drive, are becoming increasingly common to address the loss of marine biodiversity observed along coastlines that have been subjected to human-induced change. The enhancements are designed to improve habitat for native species that struggle to attach to smooth, flat surfaces commonly seen on seawalls, which are also often dominated by nuisance and invasive species.

Greater Wellington coastal scientist Dr Megan Melidonis says if the techniques prove successful and cost effective, marine ecological enhancements such as this are likely to be recommended or required more often as part of consents for coastal protection structures around the Greater Wellington Region.

“You won’t normally find much living on rock rip-rap, but if you were to look at the natural rocky areas close to Cobham Drive, you will notice species that are representative of what we expect to see establishing on these artificial tiles. Animals such as periwinkles, barnacles, and limpets, and different types of seaweed and encrusting algae.”

Penguins safely coming and going between the sea and future nests in the revetment is something that designers had to factor in when they were considering the design of the tiles and other possible ways to help marine flora and fauna establish on the coastal protection structure.

The rock revetment has been built to help prevent erosion on the most vulnerable section of the foreshore, and to protect the state highway and paths. As the area bears the brunt of the prevailing northerlies, the revetment has been engineered to absorb and spread the force of the sea, which is also helps reduce the likelihood of sea spray in this area.

The Cobham Drive project, funded by Wellington City Council in partnership with Waka Kotahi, is part of Paneke Pōneke, a citywide network of safe biking and scooting routes that will help make it possible for more people of all ages and abilities to get around in low carbon ways. It is also part of Te Aranui o Pōneke, the Great Harbour Way.

Deputy Mayor and Motukairangi Eastern Ward Councillor Sarah Free says the project is about increasing and protecting our biodiversity, and is integral to Wellington’s environmental restoration journey on land and sea.

“Wellington is one of the few cities worldwide where biodiversity is actually increasing, and we can be very proud of the work that is being done across all habitats from our hills to the sea.

“The Evans Bay foreshore has gone from being a rubbish-strewn area where I and other volunteers did monthly beach clean-ups, to a much more attractive environment for both people and nature.

“Both the Mayor and I see the work of Cobham Drive contributing to our kaupapa (values) of environmental restoration, and mahi that will also lead us to become a carbon neutral city in 2050.”