Dovi Debrief And The Week Ahead

MetService is forecasting a much more settled week of weather ahead, after the drama of Cyclone Dovi crossing the country during the last couple of days. A broad ridge of high pressure brings mostly settled conditions to the country until the weekend.

Cyclone Dovi was a major event, with both extreme winds and rain affecting many parts of central and northern New Zealand. A few rain records were broken, with both Taupō and Masterton breaking their 24hr rainfall total to 9am records, 118.8mm at Taupō airport, dating to 1979, and 124.0mm at Masterton airport, but only since 2009. A few other weather stations set new records for February daily rain totals, with Taumaranui’s 76.4mm the largest since 2007, Wellington airport’s 116.1mm the most since 1960, and Kelburn’s 127.2mm - the wettest February day since records began there 95 years ago in 1927!

Strong winds wrapping tightly around the cyclone also caused many problems. 150km/h gusts at Mt Kaukau on Sunday are a lot, even by Wellington’s standards (happening about twice a year). Even more rare is the 150kmph gust at Mahia Peninsula! Those are exposed places, but 125kmph in New Plymouth and Whangaparaoa, 120 kmph in Hawera and Port Taharoa, 110kmph at Auckland airport and 105kmph at Whanganui and Tauranga are big numbers for towns or cities. 50 stations across New Zealand hits gusts of 100kmph or more on Sunday.

MetService meteorologist Rob Kerr, says “Not only do we have a largely fine week of weather to look forwards to, departing Dovi also took the muggy tropical air with it, so no more humid nights across the North Island! “

“Although a front is expected to move over the South Island late Tuesday and during Wednesday, it will be weakening, so just some scattered rain later Tuesday in the far south, and a couple of showers elsewhere Wednesday and Thursday. However, a much more significant front is expected to displace the ridge of high-pressure next weekend, which is likely to bring rain with it. Regions already saturated will be monitoring this situation closely.” he adds. 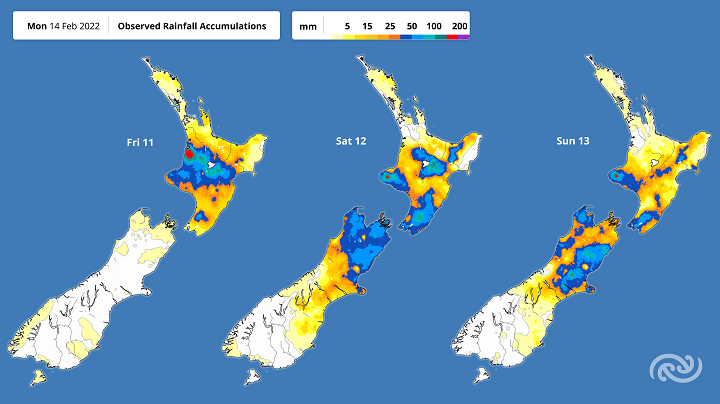