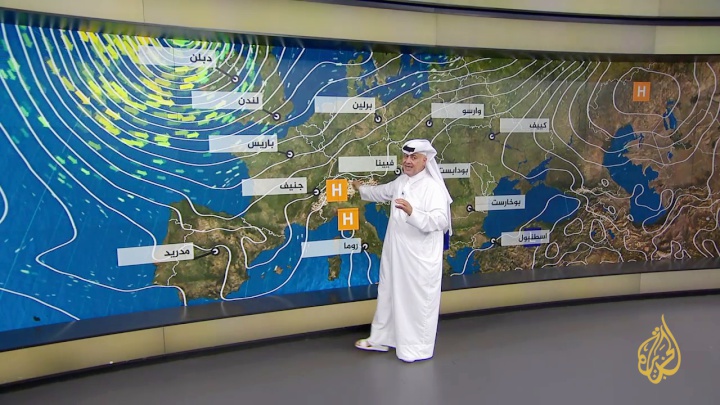 From January 2020, MetService will be providing weather graphics to Al Jazeera Media Network for their estimated global audience of 566 million households worldwide.

A three-year contract has been signed between the Meteorological Service of New Zealand and Al Jazeera Media Network.

MetService will provide the award-winning global news organisation with an innovative weather graphics system called Weatherscape XT, along with weather data for 3,000 cities across the globe covered by Al Jazeera, 24 hours a day, 7 days a week.

“This is a great example of MetService exporting Kiwi smarts to the world.”

“We first created Weatherscape as a bespoke weather broadcast product in conjunction with Television New Zealand over 25 years ago. Later, the BBC picked it up and over the 14 years we had them as a client, the product evolved. Now, it’s one of the leading weather graphics systems in the world.”

MetService Weatherscape Manager Neville Booth adds: “It is the system of choice for every major Australian broadcaster and many other broadcasters globally. And here at home it’s the graphics New Zealander’s see on TVNZ’s, Newshub’s and Prime News’ weather segments.”

MetraWeather, Manager International Consulting, Byron Drew says: “Seven months ago, we were contacted by Al Jazeera and things moved pretty quickly once they saw how Weatherscape could enhance their weather broadcasts.”

From early October, Al Jazeera Arabic has been using the new weather presenting system, and as of the beginning of next year it will be expanded to Al Jazeera English.

“This literally is a case of New Zealand taking its scientific and technology know-how to the world. Developed in Kelburn, Wellington and showcased via Doha through one of the biggest media organisations in the world to a huge global audience. That’s a real New Zealand Inc. success story,” says Byron Drew.

“We learnt a lot about the physics of dust and dust data sources, which is a unique factor specific to Middle East weather forecasting,” says Neville Booth.

Two system engineers then spent three weeks in Doha installing the hardware that operates Weatherscape, setting up the weather shows, and training the presenters and technicians on how to operate the system.

“We’ve had really positive feedback from Al Jazeera, and we very much look forward to working with them in the future, to continue to enhance their weather forecasts,” says Byron Drew.

A little closer to home, MetraWeather is introducing Weatherscape to weather news providers in Southeast Asia.