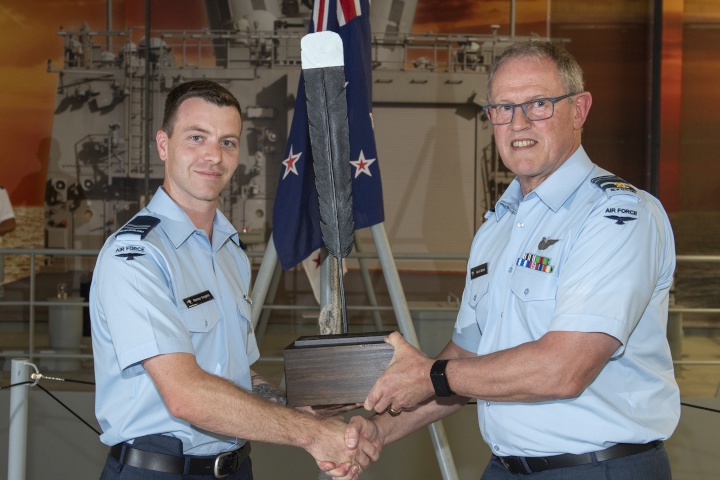 The announcement was made by the Chief of Defence Force Air Marshal Kevin Short at the NZDF’s annual Person of the Year event at Devonport Naval Base today.

Originally from South Africa, Corporal Angelo moved to Auckland’s North Shore with his family in 2000, where he lived until joining the RNZAF in 2009.

He was chosen for Person of the Year ahead of nine other category winners. Last month he was named Airman of the Year for exemplifying the NZDF’s core values of courage, commitment, comradeship and integrity and for his constant pursuit of excellence.

His Person of the Year 2019 citation said he had taken on significant projects and had a positive impact on the RNZAF’s capabilities.

“His ability to apply critical thinking enabled him to rectify a complex issue related to the Boeing 757 aircraft within the SAP (Systems Applications Projects) system, something not achieved since the aircraft’s induction in 2005,” the citation said.

Corporal Angelo’s commitment and mission-first focus was epitomised when he volunteered to cut short his Christmas leave to deploy to the United Kingdom as part of the Boeing engine recovery team, to ensure serviceable aircraft parts were available to meet operational demands.

Corporal Angelo’s contribution to his Service and the community was also noted. He is the technical director of Operation Tangata Kanorau, the RNZAF’s innovative community outreach programme.

He has also contributed to the RNZAF’s Schools to Skies scheme since its inception, helping showcase science, technology, engineering and mathematics careers for young women.

He is now sharing his technical input, innovation and creativity with the Royal New Zealand Navy as it launches a similar Schools to the Seas programme.

His commanders noted that Corporal Angelo consistently displayed a selfless commitment to the RNZAF, while appearing unaware of just how much he was contributing.

His efforts to build comradeship was epitomised through roles like Deputy Base Welfare Representative for the Junior Ranks Club, chairman of the Component Maintenance Flight Social Club, lead planner for unit adventure training, and organiser for Pink Shirt Day, as well as arranging other fundraising events. He also coaches a local children’s football team.