Pioneering settler farm and homestead placed on the market


Oakdale is situated only a short walk or drive from the historic Puhoi village community, its legendary watering hole and within 35 minutes of central Auckland.

The farm was developed, and home built by Charles Straka (born 1870, the son of Paul Straka) more than 120 years ago, and holds a prominent place in local and New Zealand history.

Paul Straka, arrived on one of the first ships to land in New Zealand from Bohemia, the War Spirit, in 1863 as a 33 year old single man. Their emigration was fueled by tales of golden lands overseas and the promise of free land if they could pay their own passage.

After a voyage of 124 days Paul and his fellow 83 settlers arrived in Auckland, and were then taken by sailing cutter to the mouth of the Puhoi River, where they were transferred to Maori canoes for the last four miles of their long journey.

The Government promised each adult a land allocation of 40 acres (16 hectares) and a child 5-19 years old receiving 20 acres (8 hectares). They were required to occupy their allotment for five years - developing it and erecting a dwelling within that timeframe.

If they managed to do this the head of the family then qualified to be granted a single free title to that land. If they didn’t last, then they lost all rights to the land and any improvements they had made.

The property’s three-bedroom, two-lounge homestead was constructed from locally logged kauri and the bush clad land was cleared by Charles’s bullock team - the horns of which can still be seen mounted in the Puhoi Pub.

He successfully bred stud shorthorn cattle and stud Romney sheep, and won many prizes at agricultural and pastoral shows. The farm now is well sub-divided into 13 large paddocks and is well supported by a reliable all year water supply, a good set of cattle and sheep yards and the original two-stand woolshed (built by Charles circa 1900), which once housed the first shearing machine in the district.

The 150-hectare farm, held in five titles, has been placed on the market for sale by tender (unless sold prior) through Bayleys Warkworth, with tenders closing on February 20. Country property specialist John Barnett said the design of Oakdale Homestead, which was fully renovated and tastefully restored in 2000 had remained virtually unchanged since it was built by the current owner’s forebear.

“As befitting a stately farmhouse of its period, Oakdale had, and still has, a formal dining area, a separate lounge, an office which would have been a library or gentleman’s retreat, and gracious covered verandahs overlooking the gardens and lawn.”

“While the fittings in the residence have been modernised, they are replications of what would have originally been used by Charles Straka’s family – including the free-standing clawfoot baths, and a solid cast-iron Waterford Stanley brand stove in the kitchen.”

Mr Barnett said some of the notable additions to the dwelling included the remodeling of its spacious loft area, the inclusion of a concealed Wormald fire suppression system, and the introduction of a central heating system.
The home is located at 121 Krippner Road – named after Bohemian pioneer Captain Martin Krippner who spearheaded the emigration to New Zealand in 1863 and helped settle people in Puhoi.

“Many of descendants of those first settlers who came to New Zealand still live in and around the Puhoi Valley today, and celebrate the anniversary of the first landing on June 29 every year. You don’t have to look far to be reminded of those founding families, as many of the street and roads bear their names,” Mr Barnett said.

“With so many heritage characteristics on tap on one of the largest landholdings in the area, some of the largest Kauri trees you’ll have the pleasure of experiencing, a flying fox, a concept plan for an additional eight titles and a genuine rural lifestyle sought by many, there’s going to be something for everyone. Whilst the sale represents the end of one family legacy, it also provides the opportunity for someone to start their own,” says Mr Barnett. 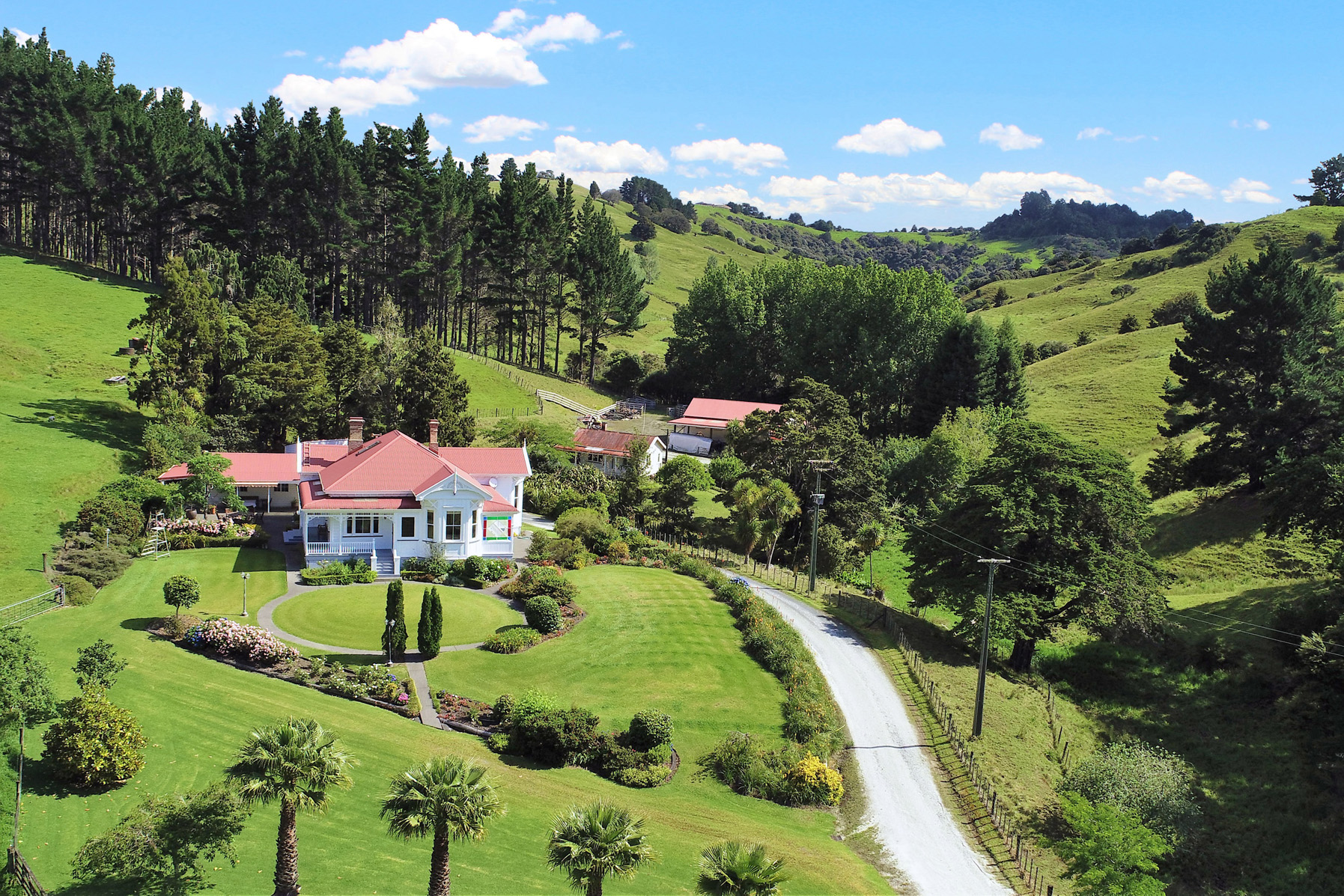