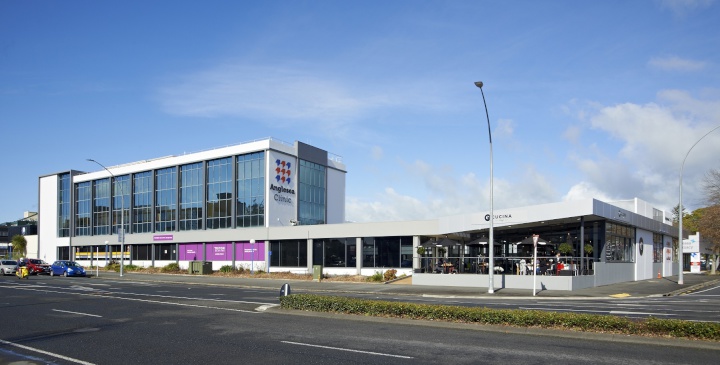 The Augusta Property Fund, to be released to the market on February 12, has been established to provide investors with exposure to a variety of property investments within the one investment vehicle. Initially it will include two directly owned assets, the Anglesea Medical Centre in Hamilton and the Albany Lifestyle Centre, a large format retail complex in Auckland.

The Augusta Property Fund will have a minimum investment requirement of $10,000. Mike Houlker, head of Syndication & Investment products for selling agents Bayleys Real Estate, says the offering has an initial forecast pre-tax cash return of 5.75 per cent per annum, paid monthly (based on a $1 unit price) with the potential for longer term capital growth.

The Anglesea Medical Centre, is located on the corner of Anglesea and Thackeray Streets. “It is one of New Zealand’s largest medical centres and is home to 28 tenants including many of the Waikato’s leading private medical providers,” says Bayleys Syndicated Investments manager Samara Phillips who is also involved in the marketing of the fund. “A key feature of the property is its many long standing tenants with the largest 10 occupants, which account for 68 per cent of the income, having been on site for between 10 and 27 years.

“Major tenants include Pathlab, one of New Zealand’s largest pathology service providers with one of the most advanced laboratories in the southern hemisphere, Hamilton Radiology, the main facility for this long established private practice, and Fertility Associates which is the only fertility treatment provider in the Waikato region. The property is also the home of Anglesea Urgent Care, the only private facility in the broader Hamilton region with the right to operate a 24-hour accident and emergency clinic.”

The 2.4 hectare site contains three main buildings with a net lettable area of 12,630 sq m and 375 carparks. First established as a medical centre in 1992, the property has been incrementally developed over time. The most recent additions include a new café/retail block in 2017 and a pharmacy extension in 2018.

A flexible zoning with building height allowances of 16-20m and low building coverage of only about 30 per cent of the total site area bode well for further development opportunities, says Ms Phillips.

She says demand for private medical services in the Waikato is expected to remain strong, driven by continued population and economic growth, constraints on the public health sector and an ageing population.

The Albany Lifestyle Centre is a large format retail hub with office components and a mix of 12 established tenants. It is anchored by one of Mitre 10 Mega’s largest home improvement stores in New Zealand, on an initial 15-year lease term from May 2018 through to 2033. Other well-known large format retail occupants include Freedom Furniture, Hunter Furniture and Danske Móbler. Upper level office accommodation is leased to NZX publicly listed transport technology and services company ERoad along with NZX, the operator of New Zealand’s Stock Exchange.

Mark Francis says all future investments by Augusta Property Fund will be strategically selected for their ability to contribute to the fund’s diversification, yield, capital growth and liquidity.

“While the fund will be underpinned by the direct ownership of properties, it may include investments in shared ownership structures such as listed and private companies, along with future Augusta investment offerings where it would be beneficial for the fund. The aim is to also enhance the return through a third investment type, underwriting.

In order to invest in some of these new investments Augusta Funds Management will need to apply for and be granted a variation to its licence under the Financial Markets Conducts Act.

Francis says historically all Augusta investments have been underwritten, with a fee paid to the underwriters. This means if there is a shortfall at an offer’s closing date the underwriter takes the remaining amount.

Francis says potential returns from underwriting would be in addition to the income return from the fund’s directly owned property assets, with underwriting distributions made to investors as these opportunities arise. These are forecast to enhance the annual return from the initial period to 5.92 cents per unit per annum.

The launch of the Augusta Property Fund follows the announcement late last month that Augusta has entered into an agreement with Centuria Capital Group, under which, subject to obtaining certain regulatory waivers, Centuria will make a takeover offer for 100% of Augusta shares. If successful, the takeover would result in Augusta Capital and Augusta Funds Management becoming subsidiaries of Centuria Capital Group.

Centuria Capital is an ASX-listed specialist investment management company with A$7.3 billion of assets under management and a market capitalisation of approximately A$1 billion. Augusta Capital independent chair Paul Duffy says Augusta Capital’s independent directors have agreed that, if the takeover offer is made in accordance with the terms set out in the bid implementation agreement, the independent directors have agreed to unanimously recommend the offer to Augusta shareholders. This would be subject to the offer price being in (or above) the range of the Independent Appraisal Report and no superior offer emerging.

“Importantly, there is an alignment on strategy and values between our two organisations. If the transaction successfully completes, I believe Centuria will bring added capability to support the launch of new investment offerings over the coming years, which our longstanding investors would continue to benefit from.”

Duffy says it remains business as usual and should the takeover go ahead managing director Mark Francis and executive director Bryce Barnett have agreed to enter into three-year employment agreements with Augusta Capital to ensure continuity of business.