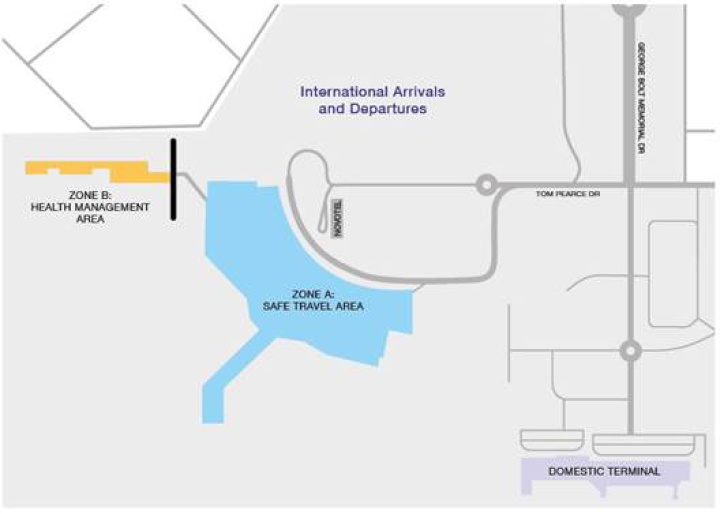 Auckland Airport’s international terminal will be separated into two zones as part of a plan to protect the health and safety of people flying to and from countries with which New Zealand has formed a safe travel bubble.

In anticipation of a safe air corridor being formed between New Zealand and the Cook Islands, Auckland Airport is preparing to separate different categories of travellers as they pass through the international terminal.

With planning in the final stages, a key feature will be the separation of the airport’s international terminal building into two self-contained processing zones, to become operational shortly after a travel bubble is announced:

• International Terminal Zone A, Safe Travel area: The main pier to the south (gates 1-10) will be used by people travelling to and from countries with which New Zealand has formed a safe travel bubble. People who have been in New Zealand for more than 14 days and are departing on international flights will also use Terminal A. Retail and food and beverage options will be available

• International Terminal Zone B, Health Management area: A second self-contained zone will be created out of Pier B (gates 15-18), the pier that points to the west. International Zone B will be used for travellers arriving from countries with which New Zealand does not have a safe travel bubble, and who are required to undergo either managed isolation or quarantine. It will also be used for passengers transiting through Auckland Airport en route elsewhere. With the limited number of transit passengers, food and beverage options will be made available via vending machines
•
Right from the earliest days of the pandemic, Auckland Airport has been working in close partnership with airlines and government health and border agencies to protect New Zealand against the spread of COVID-19.

“By reconfiguring our terminal into two separate zones we are creating a safe way for people to travel to and from countries that we have formed a travel bubble with, as well as being able to safely process New Zealanders arriving from other countries,” said Auckland Airport Chief Executive Adrian Littlewood.

“Auckland Airport is a complex eco-system of organisations and we are working closely together to enable the safe and secure movement of travellers. Auckland Airport is building the new internal walls to allow for the terminal to be separated, and we are working through the final stages of planning with border agencies and airlines to enable the physical and operational separation,” said Mr Littlewood.

Originally built in 2008 and extended in 2018, International Pier B operates on an independent network of utilities including heating, ventilation, and air conditioning, while a UV filtration system further treats and cleans the air. A separate border processing facility will also be created in International Terminal Zone B: Health Management area.

Since the outbreak of COVID-19, Auckland Airport has stepped up health and safety measures in line with Ministry of Health requirements, including frequent sanitisation of high-touch areas, increased cleaning, strict safety protocols for staff, and hand-sanitiser stations available throughout both domestic and international terminals.

“While physical distancing isn’t a requirement under Alert Level 1, we are encouraging customers to allow space between themselves and other people, and for everyone to take extra care with hygiene.

“While the timing of re-establishing international travel is a government decision, we have been working to ensure we have the infrastructure in place to support the management of COVID-19 at the border alongside safe travel to countries without community transmission,” said Mr Littlewood.

When operational, for safe travel bubble passengers arriving and departing from what will be known as International Terminal Zone A, it will be a similar experience to how people travelled through the terminal before COVID-19. The usual departure and security formalities will be in place followed by a retail and food and beverage area, with flights departing from International Pier A. Access to International Pier B will be completely closed off to these travellers.

“It will also mean we use buses and remote stands more frequently to ensure the careful separation and processing of passengers departing and arriving from different parts of the world,” said Mr Littlewood.

“Making these major operational changes is only possible with the commitment and support of all our partners across the airport system. We have worked hard to protect New Zealand against the virus and this close collaboration will continue as we work to enable future safe travel bubbles.”