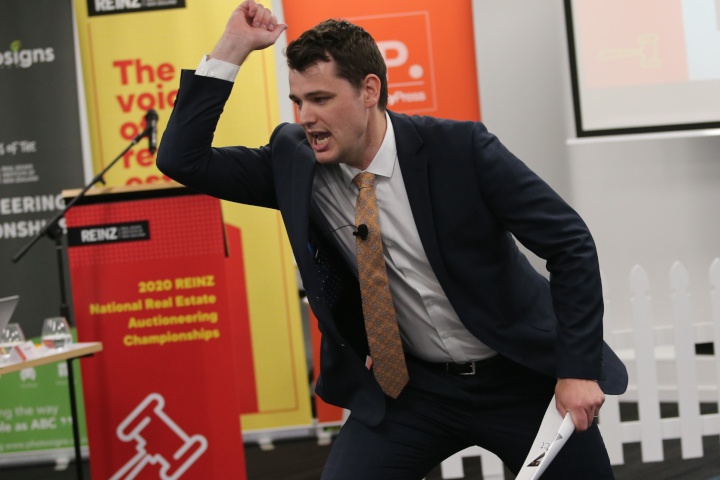 Ned Allison from Harcourts Grenadier, Christchurch has been crowned as the winner of the 2020 REINZ National Real Estate Auctioneering Championships for the second time.

Ned who also won the competition in 2017, was competing against the elite of New Zealand’s quick-thinking auctioneer professionals, after two days of intense competition. With representation from all the major real estate groups, the competition saw 22 competitors from across the country vying to be the best of the best. The field was dominated by Harcourts in both the Rising Star and Senior Divisions.

Of the six finalists in the Senior Division, four were from Harcourts including Aaron Davis, Andrew North, Lisa Yardley-Vaiese who is the 2020 Harcourts New Zealand Auction Champion and Ned Allison.

“At Harcourts we have a real focus on the development of our auctioneers. There is a lot of guidance and support from our National Auction Manager Aaron Davis and I’m pleased to say we are yielding some fantastic results from the hard work everyone has put in. Over 50% of the 46 competitors in the championships were from Harcourts and as a brand we receive more industry recognition awards nationally and internationally than any other real estate group in New Zealand”.

“Auctions are the sale method of choice in Auckland’s heated property market, with vendors gaining the best prices from competitive bidding”.

Ned Allison has been part of the team at Harcourts Grenadier since 2013 and has been calling auctions for the past 7 years. During that time, he has sold over 2000 thousand homes for people, using his ability to connect with people and lead them through negotiations. He has competed in seven REINZ competitions, making the final three times and winning twice.

He says of his win, “It is a special win because Lisa Yardley-Vaiese and myself were in the final together this year and back when we started our auctioneering competitively in the 2014 championships, (both competing in the Novice, Rising Star Division), competitors such as Andrew North and Aaron Davis were in the Senior Division and we watched in awe at their skill and prowess hoping one day we would stand on the same platform”.

Adding, “Having moved into a Sales Manager role in the Harcourts Grenadier City Office I am enjoying the variety in my working life”.

Taking it one year at a time, Ned says he will be back next year to compete in the REINZ Auctioneering Championships again and hopes that the Australasian competition will be something he gets to compete in when it is re-established.