As the search for well-located developable residential land in Auckland escalates, the next obvious node for more intensive urban development is Scott Point – to the south of Catalina Bay on the Hobsonville peninsula – where significant new housing is currently underway, and where a new school opened at the start of this year. 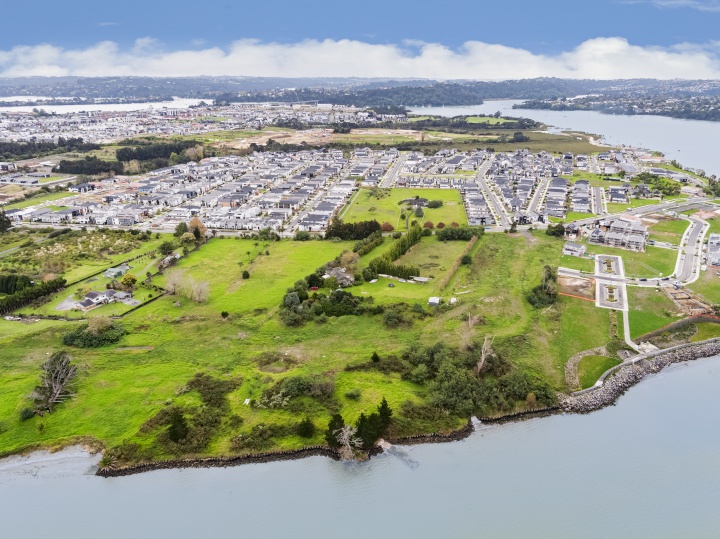 The flagship Hobsonville precinct is providing a roadmap for the way new master-planned communities can look and feel and it has seen the greatest volume of recent building activity in the region, clocking up 1795 completed builds since the start of 2019.

With land running out in the immediate precinct, developer eyes are now scoping out nearby land opportunities that can leverage off the high level of amenity at Hobsonville Point and which can allow for a wide range of housing configurations.

A 3.55ha (more or less) freehold waterfront site held in one title at 18 Scott Road, Scott Point, with views of the inner Waitemata Harbour across to West Harbour Marina, Te Atatu Peninsula and Auckland CBD, has come to the market for sale with Bayleys.

Zoning falls within the Scott Point Precinct Plan with the majority of the site zoned Mixed Housing Suburban which allows for development of varying various intensification, with the premium waterfront strip zoned Single House to maintain the integrity of the coastal location.

Stephen Scott and James Chan of Bayleys Auckland Central, along with Barry He, Bayleys Northwest, are marketing the site by tender, closing 4pm Thursday, 15th July, unless sold prior.

Scott said the vendors have owned the land for 11 years and are now wanting to sell to a proactive new owner who will recognise the inherent potential the property has to cater to the shortage of residential options in the current housing market.

“Auckland’s northwest has been transformed through clever development that optimises the location, and meets changing expectations around lifestyle,” he said.

“On the back of population growth, low interest rates, and a clear housing shortage in Auckland, the broader Hobsonville area is still evolving and its proven credentials are well-documented and held up as best-practice within New Zealand.

“A whole new community has been created and, as it is well-networked to the rest of the region thanks to good roading infrastructure and ferry connections, it’s become a popular dormitory suburb that is far from sleepy.”

The land for sale with Bayleys is of generally level contour from the Scott Road frontage and slightly elevated along the coastline. There is an existing 1970s brick and cedar home, currently leased; full services available, and direct access to the esplanade and public reserves.

Scott said the neighbouring 5.3 hectares of land at 20 Scott Road is currently being developed into a residential subdivision and there is other development well-advanced nearby.

“News that a primary school opened at Scott Point in February this year is encouraging for developers who will take confidence from the fact that the area is future-proofed for families.

“Scott Point School has a current roll of around 130 children and is well-configured for growth.

“It will serve the evolving community at Hobsonville and Scott Point, and further underpins the area as suitable for more affordable housing options.”

The supply of unspoken-for land is getting extremely tight, and demand for housing is showing no sign of easing.

“With the new town centre at Westgate and commercial offerings at Hobsonville and Catalina Bay easily accessible, and with continuing infrastructural upgrades, the appeal of Scott Point is undeniable in the bigger Auckland picture,” said Scott.

“Due diligence through the usual council planning channels will ultimately determine the density of housing achievable at the Scott Road site, however, the coastal aspect will be the main attraction with views widely attainable through an intelligent design lens.”

Auckland Council has plans for the Scott Point Sustainable Sports Park community facility which, when combining Hobsonville Point and Scott Point, will serve upwards of 20,000 residents in the near future.

The park, on a 16-hectare site, is set to become the first fully-sustainable park in New Zealand.

Eight out of 10 New Zealand investors have a more favourable view of investing and financial markets after using online investing platforms, according to research released today by the Financial Markets Authority - Te Mana Tātai Hokohoko... More>>

ASB: Labour Shortage Sting Set To Cause Issues For Years According To Latest Quarterly Economic Forecast

There are positives and negatives in the latest ASB Quarterly Economic Forecast as New Zealand continues to bounce back strongly from COVID-19. The closed border is putting additional strain on the country’s labour market... More>>