In one of Tauranga’s largest ever commercial property transactions, the Bethlehem Town Centre shopping mall plus neighbouring development land have been sold for $102.5 million. 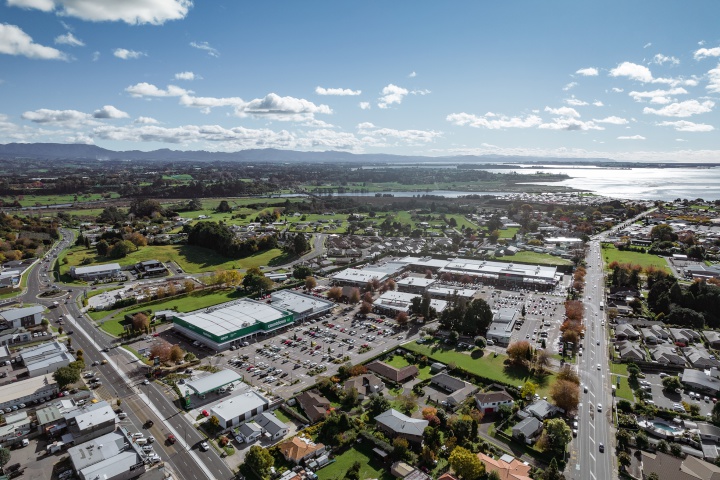 The 21,494 sqm shopping centre which has 54 tenants - with Countdown and Kmart its anchor occupants - and the 7.8 hectare site on which it is located has been unconditionally purchased by property funds management business PMG Funds Limited. Bethlehem Town Centre is to be added to the company’s Generation Fund, the fifth and latest commercial property fund that PMG has established since it was founded in 1992.

Adjoining land totalling approximately 1.2ha, a small portion of which is occupied by a child care centre, has been on sold for $7.7 million and is likely to undergo residential development, subject to obtaining the necessary council consents.

Both sales were transacted by Bayleys Tauranga broker Jim McKinlay who says they reflect extraordinarily strong underlying confidence in the city’s property market. “There is a lot of demand for commercial property across all price points driven by Tauranga’s rapid population and economic growth. But a transaction of this size and scope is something out of the ordinary and represents a massive vote of confidence in the city’s continuing growth story.”

Originally developed in 2009 with Countdown as its anchor tenant, Bethlehem Town Centre was expanded further in 2016 with the opening of the Kmart store on a 12-year lease term. The centre’s roads were reconfigured to accommodate the increased vehicle and foot traffic from the large new tenancy and carparking was expanded to accommodate over 1,000 vehicles.

A new BP Connect site, with a 15-year lease, was also opened in the centre in July last year. Other sizeable tenants include Smiths City, Chemist Warehouse, Unichem Pharmacy and Paper Plus. The remaining tenancies comprise a mix of national and local food and beverage and smaller retail premises. The centre currently has 97 per cent occupancy.

“Designed as an outdoor-focused shopping mall, Bethlehem Town Centre contains interconnecting building precincts that create a sense of place, with wide footpaths, extensive landscaping, continuous canopies and a good mix of tenancies,” says McKinlay. “The centre has developed a strong connection with the local community as well as drawing many other customers from a substantial catchment area given its proximity to central Tauranga.”

The Bethlehem Town Centre has been jointly owned for many years by private Bay of Plenty family interests in conjunction with international institutional investors and has been managed by AMP Capital. The change in ownership is scheduled to take effect towards the end of July.

PMG’s executive director Scott McKenzie says the property has been purchased to provide diversification for the Generation Fund, initially established in February last year with three industrial properties located in Hamilton, Wellington and Christchurch. Another industrial holding in Seaview, Lower Hutt is also to be added to the fund.

“The Bethlehem Town Centre provides excellent exposure to the retail sector and in particular a premium quality retail hub, underpinned by large-format retailers that drive car

and foot traffic to this strategically positioned site on State Highway 2 in one of Tauranga's most affluent suburbs.”

The Bethlehem Town Centre is among more than $340 million of suburban shopping centre and large-format retail sales concluded by Bayleys since the beginning of last year. Also selling recently in Tauranga, for $44 million, was the Tauranga Crossing Lifestyle Centre, occupied by Foodstuffs subsidiary Gilmours, Farmers and Bed Bath & Beyond.

Another suburban shopping centre, the Kelston Mall in West Auckland, was sold on behalf of PMG Funds to a Singaporean investor for $43.4 million while three Countdown supermarkets in Fraser Cove Shopping Centre, Tauranga, Orewa and Porirua and a Bunnings Warehouse hardware store in Grey Lynn have been sold to separate purchasers at a combined total of $118 million.

Ryan Johnson, Bayleys’ national director commercial, says predictions that the retail property market would take a substantial hit from COVID 19 lockdowns have proved to be wide of the mark.

“Retail spending has held up much better than expected and consequently we are experiencing continuing high levels of investor enquiry for well located retail offerings, ranging from small unit titled premises right through to these large-scale properties.”