A landmark commercial block on Napier’s high-profile Marine Parade - with virtually uninterrupted sea views and tenanted by two professional services companies - has been placed on market for sale. 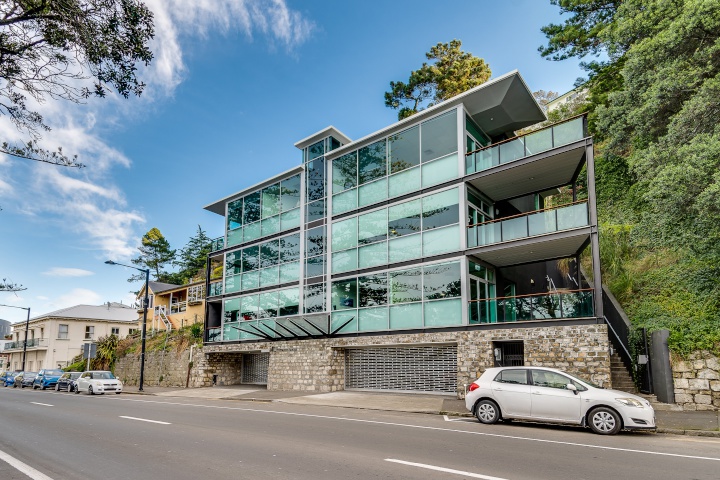 The stand-out four-storey block at 19 Marine Parade – known as Kel Tremain House - overlooks the city’s famous Norfolk pines and the Pacific Ocean waterfront, and is just a short walk from the city’s central business district. The property consists of 769 square metres of office space sitting on 943 square metres of freehold land.

The building was named in honour of Hawke’s Bay rugby legend Kel Tremain who played 86 times for the All Blacks between 1959 and 1968. Flanker Tremain also played 96 times for the province, and after retiring from top-flight rugby, served as an administrator – including as chairman of the Hawke’s Bay Rugby Union between 1985 and 1990. He passed away in 1992.

Now the triangular-shaped freehold land and standard rectangular-shaped building at 19 Marine Parade are being marketed for sale by Deadline Private Treaty through Bayleys Napier, with offers closing on August 5. Salespeople Daniel Moffitt and Jacob Smith said the building was one of the best examples of commercial office space in the city – combining a prime location with a premium premises.

“With its floor-to-ceiling tinted glass windows on the upper three levels, the A-grade office block at 19 Marine Parade architecturally delineates the more ‘heritage’ portion of town from the port area with its proliferation of commercial and industrial premises,” Moffitt said.

“The high-quality internal fit-outs of both tenants maximise their seaward facing views – enhanced by the full-length tinted windows. All three levels are approximately the same size and feature outdoor decks at either end of the building which are routinely used as lunch areas, or for socialising after work – particularly over the summer months.”

Smith said that because of its prominence on the Marine Parade arterial route, along with its two professional tenants and strong links to Hawke’s Bay sporting legend Kel Tremain, Kel Tremain House had always been maintained to an extremely high standard.

“An internal staircase and a lift provide access to the upper office levels, while an external stairway running beside the building on the edge of the property set into Bluff Hill also provides access to all floors for staff and clients entering from the pavement,” Smith said.

“The rear portion of the property looks onto the natural greenery on the side of Bluff Hill.”

Built in 2008 with reinforced concrete masonry walls, steel roofing on steel purlins and beams, and with substantial foundations, the property has a new building standards rating of 100 percent. The external walls consist of 200mm – 250mm thick reinforced blocks, while the internal walls are timber framed with GIB board linings.

“With secured staff parking under the building with internal access to the upper levels from both the lift and stairs, and ample street parking on Marine Parade immediately outside, Kel Tremain House serves its tenants and their clientele extremely well and justifies why occupancy within the building has always been at consistently high levels,” said Smith.

Latest commercial property market data and analysis from Hawke’s Bay real estate valuations company TelferYoung notes that: “There has been a notable increase in demand for larger scale office tenancies within both Napier and Hastings over the last few years, and good rental growth within this sector via a number of new lettings and renewals/reviews.”

“This decrease in vacancy can be largely attributed to the Napier City Council and Inland Revenue Department relocations, and due to loss of rental stock along with three large multi-storey office buildings which have been removed from the stock due to redevelopment – the PWC Building, the ex-Langley Twigg Building, and 70 Tennyson Street,” said the TelferYoung market commentary.

Smith said the office vacancy data underpinned the value of the Marine Parade block for sale – highlighting that there was solid demand for premium grade office space in and around Napier’s central business district.