A block of rural-zoned land bordering one of the country’s busiest highways and sandwiched between two substantial industrial business plants near one of New Zealand’s rural ‘boom-towns’ has been placed on the market for sale. 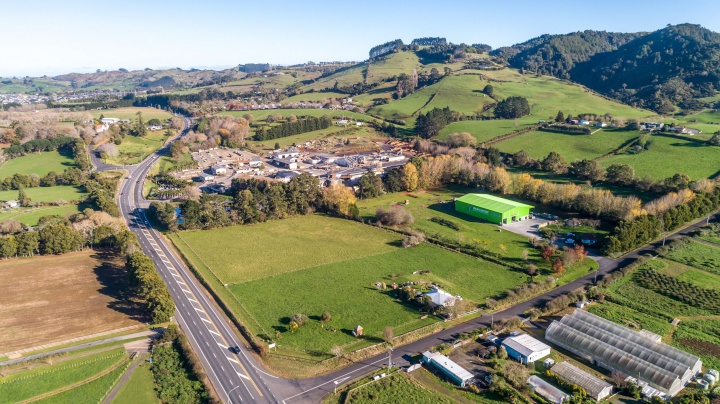 The largely undeveloped 4.1-hectare pasture block at Mangatawhiri in the Northern Waikato sits at the southern base of the Bombay Hills on Auckland’s metropolitan urban limit, and just a few kilometres away from the prosperous satellite township of Pokeno which has sprung up in the last few decades.

The rectangular-shaped landholding for sale faces onto State Highway Two – which connects Auckland to the Coromandel Peninsula and the western reaches of the Bay of Plenty. New Zealand Transport Agency figures show that on an average weekday, some 11,692 vehicles travel along this stretch of the highway in both directions.

Currently used for stock grazing, the flat topography property at 11 Irish Road includes a three-bedroom home. The corner site landholding and house have been placed on the market for sale at auction on August 10 through Bayleys Hamilton.

Salesperson Josh Smith said that with the appropriate council consents, the property could be developed to sustain industrially focussed buildings whose tenants could service the nearby boom town of Pokeno just three kilometres to the west along the highway.

“Pokeno has grown from a virtual dormant township just two decades ago to now become one of Auckland’s fastest growing satellite population centres,” he said.

“The town is now home to multiple industrial operations – including concrete products manufacturer Hynds, the Synlait milk processing plant, the Yashill NZ diary company, and a Countdown supermarket, all located in and around the town’s southern precinct.

“Meanwhile, the proliferation of housing developments to the west and north of what was the original central high street business district has seen the resident population swell to some 2,517 people according to the 2018 census.”

Smith said that as Pokeno continued to grow, new service industries underpinning activity in the area would look at cheaper land options in close proximity to the urban centre – such as the property at 11 Irish Road – to accommodate their businesses.

“The Irish Road property sits within what could be termed Mangatawhiri’s industrial hub – sitting adjacent to the extensive timber processing operations of Max Birt Sawmill on one boundary, the large warehousing storage plant operated by Pacific Biofert on another boundary, and just a short distance down the road is the Southern Palms Nursery,” Smith said.

“Under this auspice, the existing home could be utilised as ready-made office premises – already consisting of a kitchen, bathroom, and staff amenities in addition to reconfiguring the bedrooms into multiple office spaces.

“Alternatively, and again subject to relevant council consents, the residential component could retain its existing domestic purpose and deliver a live-and-work adjunct to any new industrial premises which may be built across the remainder of the site.”

Data from Waikato District Council outlines that Pokeno’s position alongside the Waikato Expressway portion of State Highway One was a key advantage in relation to the town’s future development potential – benefitting from both northbound and southbound on-ramps to the highway.

Pokeno’s economic growth over the past two decades – particularly escalating in pace since 2010 - has seen Waikato District Council complete a Structure Plan with design and construction guidelines for the central township built around Great South Road.

Waikato District Council said Pokeno’s Structure Plan “has been developed to manage huge growth in this town through new residential, business, industrial and recreation zonings. Many new houses are being built here and it is becoming a hub for new industry.”