The land, buildings and market-leading supermarket business trading as one of the biggest private sector employee on the tiny Pacific nation of Niue have been placed on the market for sale. 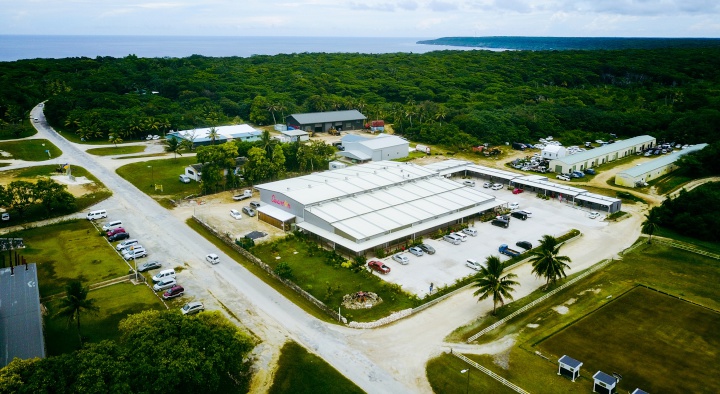 The property at Fagalilika on the island of Niue features a purpose-built supermarket called Swanson as its anchor tenant, surrounded by a host of smaller retail and office units, and a bonded liquor store operated by the Niuean Government.

Built in 2018, the high-stud warehouse style supermarket is the only one of its scale in Niue – shelving similar product lines which consumers would expect to find in New Zealand supermarkets, and employing up to 12 staff. The business trades six days a week, closing in the early evening.

Dry, frozen and chilled product lines are supplied out of Auckland through a wholesale distribution agreement, and several large multi-national grocery suppliers.

The smaller retail sites within Swanson Retail Complex include a gymnasium, clothing shops, a cocktail bar, post shop, travel agency, and an office tenanted by the nation’s chamber of commerce organisation. The property has sealed parking for approximately 80 vehicles.

The leasehold land and buildings within the Swanson Retail Complex located at Tapeu-Porritt Road in Fagalilika are now being marketed for sale by deadline private treaty through Bayleys Auckland, with offers closing on October 13. Salespeople Rick Kermode and Prashant Vigan said the Swanson supermarket going concern business was also part of the real estate sale offering.

Combined, the large format grocery, retail, and commercial units with Swanson Retail Complex generate an attractive rental. The smaller retail units of approximately 50-square metres each in size, are on lease terms ranging between one and three years.

Constructed of steel framing and rolled steel joint portals on a reinforced concrete pad foundation, Swanson supermarket rises from a height of 3.5 metres on its sides to 5.78 metres at its central peak over the shop floor. Roller doors at the rear of the store allow for vehicular access and stock delivery. The rear portion of Swanson’s storage and distribution warehouse has a stud height of approximately seven metres.

Kermode said that with key tenancies including Swanson supermarket and the sizeable well-stocked liquor store, Swanson Retail Complex in the area of Fagalilika near the country’s international airport is one of the best known and most visited commercial properties on the island of Niue.

Kermode said the rear half of Swanson supermarket had been specifically designed with purpose-built freezer, chiller and ante rooms amounting to 215-square metres and capable of accommodating at least three month’s worth of frozen stock at a time.

“Within the building there is open-plan administrative office space overlooking the retail showroom floor, with adjacent staff lunchroom and toilets amenities,” Kermode said.

“Under the auspices of the Swanson supermarket premises is a separately-owned and operated Bond Store liquor outlet. Occupying some 400-square metres of space, the Government-run Bond Store has mezzanine-level office and storage space above its shop floor where customers can purchase licensed beverages.”

Vijan said the other smaller terraced retail units within Swanson Retail Complex were located in an L-shaped configuration around the structurally dominating central supermarket and liquor store premises.

“A covered walkway links the network of smaller units, with each premises having shared access to public toilets at their rear of their address. A back-up power supply unit for the supermarket is provided by way of a generator located at the rear of the supermarket,” Vijan said.

Located some 2,400 kilometres north-east of New Zealand, Niue is a large upraised coral atoll of some 269 square kilometres in size. It’s population of approximately 1500 residents is scattered across 14 villages. The local currency is the New Zealand dollar and the local banking system is provided by Kiwi Bank.