The recent construction shutdown resulting from Auckland’s Covid 19’s lockdown restrictions has put additional pressure on an industrial property market that is already struggling to keep pace with demand. 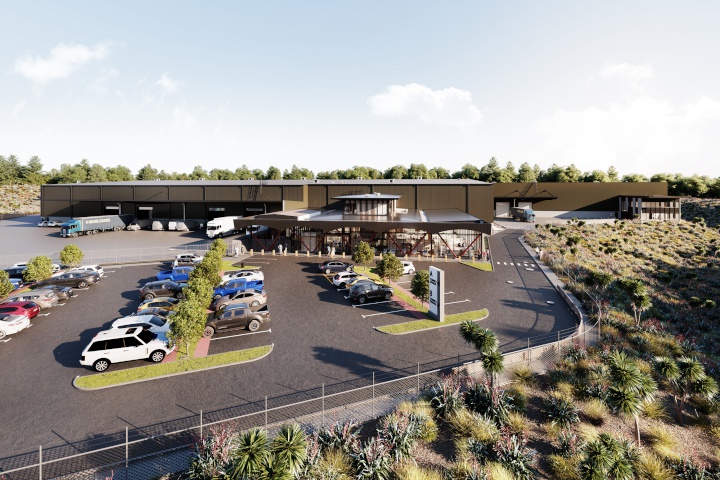 Artist’s impression of Hancocks distribution and head office complex in Mangere which sold for $48.8 million

Scott Campbell, Bayleys’ national director of industrial and logistics, says Bayleys has had one of its busiest six months ever, particularly at the higher value end of the market, negotiating over 30 industrial sales in excess of $5 million since April 1. However, he says the latest Level 4 lockdown has further exacerbated the shortage of properties available for purchase or lease.

“Lockdowns last year slowed the development of new industrial premises and land subdivisions considerably and we hadn’t really caught up on the supply side when construction was halted in Auckland for another five weeks from mid August until last week.

“This has increased the already high level of pent-up demand for industrial property which is coming from all quarters – investors, business owner occupiers, tenants and developers.”

Sunil Bhana, Bayleys’ Auckland industrial sales and leasing director, says a limited supply of new properties coming onto the market are being rapidly snapped up, often before construction has been completed.

A recent example is the sale of a new warehouse complex nearing completion close to Auckland airport at 29 Sistema Way, Mangere. Located on a 4,314sqm site, the 4,054sqm clear span warehouse with a 1,171sqm drive-through canopy and 260 sqm of offices was purchased vacant by an investor for $18.25 million.

“Investors have so much confidence in the industrial property market that they are comfortable about buying a building that is under construction without tenant commitment given Auckland’s record low industrial vacancy rate which is currently sitting at a miniscule 1.5 per cent,” says Bhana who was involved in the Sistema Way sale with colleagues James Valintine, James Hill, Scott Campbell and Tim Bull. “In this case, the purchaser managed to quickly secure an occupant which reflects how much unsatisfied leasing demand there also is for modern, high-stud A grade premises in good locations.”

Bhana says much industrial construction activity in recent times has been close to the airport. The Mangere-Otahuhu area accounted for 35 per cent of all Auckland industrial building consents in 2020, well ahead of any other precinct.

Bayleys South Auckland office has also negotiated the leasing and subsequent sale while under construction of three properties on adjoining lots in a 12-lot industrial subdivision at 72-88 Tidal Road, Mangere at a total value of $116.8 million. These were sold with 12-year leases from building completion.

The largest transaction was the $48.8 million sale to Centuria NZ (formerly Augusta) of a 15,000 sq m complex on a 4.9 ha site to be occupied mostly by Hancocks Wine, Spirit and Beer Merchants as their national distribution facility and head office. The property was acquired as part of the Centuria NZ Industrial Fund’s third capital raise marketed by Bayleys’ Syndication and Investment Products division.

The other two sales of neighbouring lots encompassed a 13,700sqm warehouse and office building on a 1.8ha site, occupied by logistics provider Supply Chain Solutions, which was sold for $43.5 million and an 8,700sqm industrial facility on a 1.25ha site, leased to another logistics company, which received 14 offers and sold for $24.5 million.

Further south, work has also commenced this year on the first industrial buildings to be constructed in the 361-hectare Drury South Crossing project being developed by Stevenson Group. Scott Campbell says building activity is expected to pick up rapidly there over the next few years with the uptake of sites running ahead of expectations.

“The majority of sales so far have been to owner occupiers and particularly businesses wanting big industrial facilities. They have been mostly shut out of other parts of Auckland where large industrial land holdings are mainly in the hands of longstanding corporate landlords who build for tenants.

“Drury South Crossing is really the only game in town for businesses looking to acquire large plots of land which can accommodate buildings of scale with flexibility for expansion at a later stage.”

Bayleys has recently sold seven hectares of land there for in excess of $40 million to a major player in the third-party logistics market, says Campbell. “We also have two other big sites totalling around 13 hectares under contract at a sales value of close to $100 million to two other large owner occupiers. There’s been strong demand as well from a wide range of businesses and developers for smaller to medium-sized sites which have been selling for $750 to $850 per sqm.”

Bhana says Auckland industrial property yields appear to have plateaued mostly at between 3.5 and 4.5 percent. “Yields have started to nudge up a little on some offerings in anticipation of the Reserve Bank increasing interest rates. However, keeping this in check is strong buyer competition which is likely to continue as long as demand for industrial property outstrips supply.”

Bayleys North Shore director Matt Mimmack says good quality properties with underlying zonings that allow for more intensive development in the future are selling at historically low yields. He sold a high profile 3,000 sq m main road, corner site with a General Business zoning in Albany for a confidential price in the double figure millions at a record low yield of 3.3%. A new tenant has recently moved into the single-level warehouse and office building on the site on an eight- year lease.