Congratulations to Ben McNab, Assistant Winemaker at Palliser in Martinborough, who came became the 2021 Tonnellerie de Mercurey North Island Young Winemaker of the Year. The competition was held on 27th October at EIT in Hawke’s Bay. 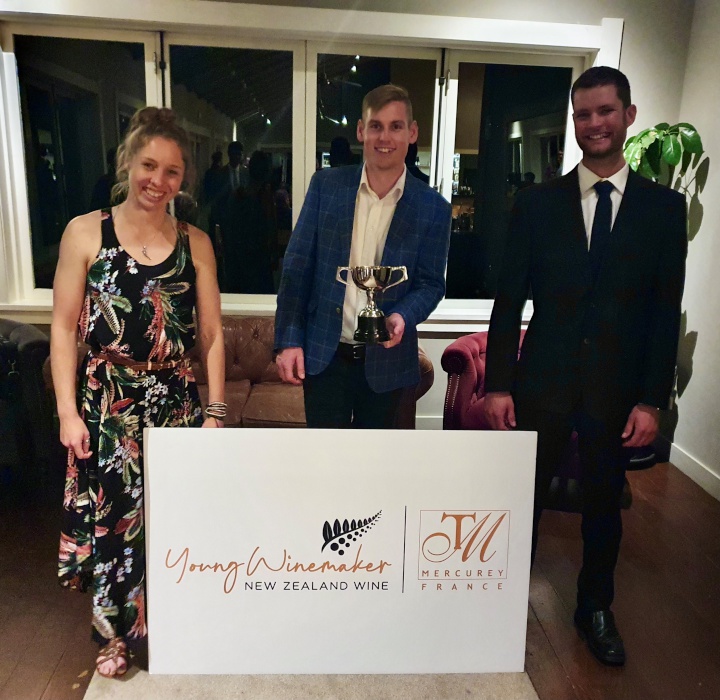 As the 2020 winner of the North Island competition Ben says “Defending the title added a bit more pressure so I was very relieved to come out on top again this year, especially as the calibre of the other contestants was so high.” He is thrilled to go through to the National Final and looking forward to competing against Jordan Moores from Valli and Peter Russell from Matua as he knows them both quite well. “It’s going to be a great competition. It will be tough, but with a real buzz. I can’t wait!”

Congratulations also goes to Kaitlin Bond from Indevin in Gisborne who came second and to Douw Grobler from Trinity Hill in Hawke’s Bay who came third.

This regional competition is open to emerging young winemakers under 30 years old from all around the North Island. This year contestants came from Hawke’s Bay, Gisborne and Wairarapa. The other contestants were Gavin Dalton from Villa Maria, Tom Crosier from Craggy Range and Frances Robertson Best from Te Mata Estate.

Unfortunately due to lockdown continuing in Auckland Guy Young from Goldie Estate on Waiheke and Gracie-Rose Kay from Coopers Creek in Kumeu were unable to compete this year, but are looking forward to taking part in 2022.

It was a tough day as the Young Winemakers were tested on many aspects involved with wine production including a cellar challenge, laboratory tests, blending, fault finding, blind tasting, marketing, wine knowledge and wine tasting. They also debated a given speech topic at the Awards Dinner held at Black Barn. This year’s topics included the future of seltzers, climate change and the international popularity of Hawke’s Bay Chardonnay.

The competition is made possible by all the generous sponsors, who are appreciated more than ever in this challenging year. The national sponsors are Tonnellerie de Mercurey, Booster Wine Group, Crown Sheet Metal, Fruitfed Supplies, Hillebrand, Indevin, Laffort, Programmed Property Services, Visy, Winejobsonline and New World.

Ben was awarded with a great prize package of $1000, an educational trip to a NZ wine region sponsored by Fruitfed Supplies as well as financial support to the National Final in Central Otago where he will go on to represent Wairarapa. The National Final will take place early in 2022.

All contestants were gifted a bespoke piece from Unio Goldsmiths.

Apart from being crowned the 2021 Tonnellerie de Mercurey NZ Young Winemaker of the Year, the national winner will take home an amazing prize package which includes a travel grant to visit the Tonnellerie de Mercurey (cooperage) in Burgundy, be an associate judge in the New World Wine Awards and review wines in DrinksBiz magazine.