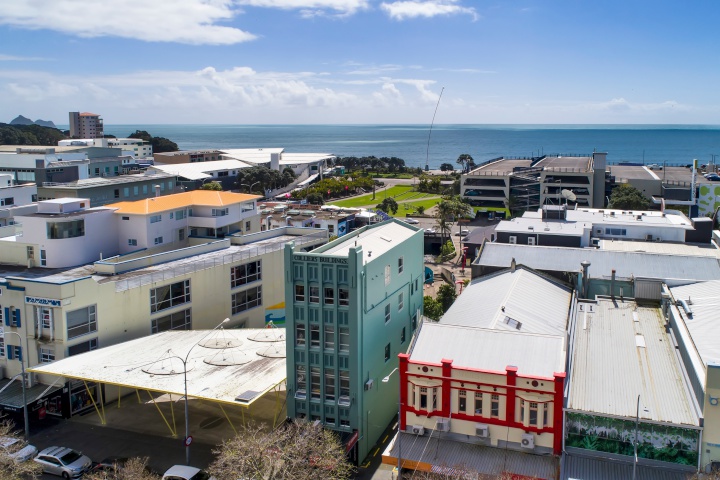 Three retail and commercial office premises located in New Plymouth’s central business district have been placed on the market for sale at a time when there is strong interest in the area’s real estate activity.

One of the properties is located in the city’s busy hub of Devon Street East, while the other two are located nearby in Devon Street West. All locations are zoned Business A under New Plymouth District Council’s plan.

The trio of central New Plymouth properties for sale encompasses:

• A mixed-use building at 16 Devon Street West – featuring a five-storey premises with photographic retailer on the ground level, and two well-presented apartments that possess stunning views on the upper floors. The 460-square metre building sits on some 99-square metres of land - generating an annual net rental of $28,000 from the ground floor retail tenant, and $51,218.52 per annum from the accommodation portion.

• A tenanted two-storey retail and office block at 60 Devon Street East overlooking the city’s busiest pedestrian crossing – sitting on some 284-square metres of land and generating an annual net return of $42,800 from the ground floor retail tenancy with $12,000 gross from the first-floor commercial office tenancy.

• A multi-tenanted building at 66 Devon Street West consisting of three retailers and one office occupant – with the potential for any new owner to redevelop the location. The 730- square metre building sits on some 360-square metres of land and produces a combined annual net rental income of approximately $68,000 from the various tenancies.

The properties are owned by different parties and are being marketed for sale by Bayleys New Plymouth. Two are for sale by auction and one is for sale by private treaty, at dates ranging through to early December.

Bayleys New Plymouth salesperson Darryl Taylor said there was certainly a renewed interest in the central city’s retail and commercial real estate landscape, which had been highlighted by the recent sale of one of the area’s longest-running bars – the Irish-themed Peggy Gordons Celtic Bar in Egmont Street.

Located at 58 Egmont Street on the corner of Devon Street West, Peggy Gordons has been pouring creamy pints of Guinness for almost 28-years.

The four storey-premises sitting on freehold land, along with the going concern hospitality business, recently sold for more than $2million – and was purchased by a South Taranaki businessman as an investment.

The heritage corner site building housing Peggy Gordons underwent a million-dollar refurbishment five years ago. The bar business and building has been owned by jovial proprietor Bertie Burleigh since 1993, and has poured beverages for such international stars as Tom Cruise and Billy Connolly.

Taylor said the business and property attracted interest from around New Zealand. Following months of negotiations, the deal was concluded in September while the city was still in level two lockdown conditions.

“The sale of the Peggy Gordon’s bar in Egmont Street shows the long-term confidence investors have in New Plymouth’s CBD property market – particularly involving premises located within what is known as the West End arts precinct of town with its proliferation of bars and restaurants,” he said.

“Land and buildings in and around the West End precinct – highlighted by the Peggy Gordons sale - are continuing to attract high value interest and attract a range of quality tenants. By comparison, land and buildings outside the hospo’/entertainment hub but still within the central city are selling well but there is an obvious premium being paid by property owners to be where the ‘action’ is.”

Substantial commercial premises to have emerged in the West End precinct over recent years include the boutique 28-bed King & Queen Hotel Suites which opened in 2016, and the Egmont Business Centre serviced office premises in Egmont Street which was fully refurbished to a high standard in 2017.

“In the past 12 plus months since the initial Covid-19 lockdown, we have experienced rapid growth in the commercial and industrial property markets - particularly the latter - in New Plymouth,” Taylor said.

“This has been driven in majority by low interest rates coupled with the increase in out of town buyers hunting a more appealing yield than they might find in the larger metropolitan areas.

“For the first time we have seen these yields compress below five percent, however there are some great opportunities for unconditional buyers at around six to seven percent in the city.”

As part of that, the council’s Main Street Frontage fund is distributing up to $50,000 a year to assist CBD property owners in upgrading the facades of their buildings. The next round of funding applications closes at the end of November, and Taylor said the city’s business community was eagerly anticipating an announcement of the successful applicants and their properties.