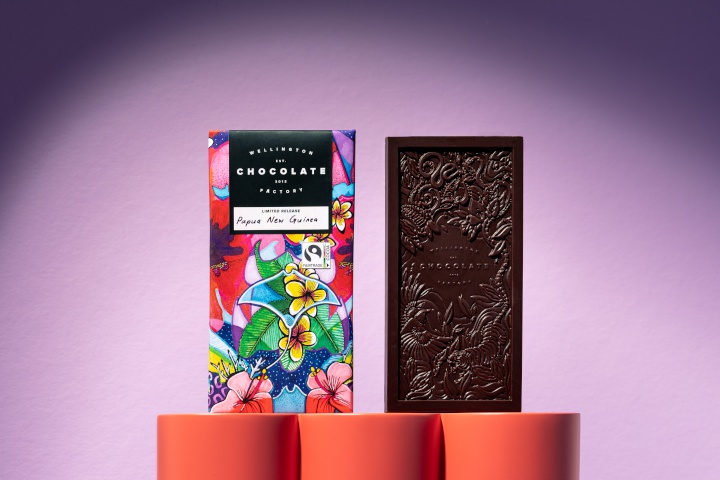 With fewer than 200 bars available, the chocolate is made from organic, Fairtrade beans grown by the Yangoru Cocoa Development Project, based in Wewak, in the remote northern region of East Sepik province. A collaborative farming initiative, 529 small scale farmers grow cocoa beans, supporting a community of more than 2600 people. The co-operative became certified in 2020, and cocoa is their main source of income. Like many other small-scale farmers, most of the income from cash crops covers school fees for their children.

Virginia Jones from Fairtrade says in releasing the bar with WCF, they want to bring the best of PNG to New Zealanders, particularly while travel is restricted.

"PNG is doing it particularly tough during Covid-19. Pre-Covid, visitor numbers were increasing every year, but with borders closed, they’ve lost over 200 million annually with a 82% drop in visitor numbers. We want to take people on an adventure for the senses and transport them to an incredible country that is so close to us but is yet so different," she says.

The Yangoru farmers receive a Fairtrade premium for their beans, which is over and above the Fairtrade price and goes into a communal fund for workers and farmers to improve their social, economic, and environmental conditions

Gabe Davidson, the co-founder of WCF, travelled to Bougainville by Vaka (traditional boat) in 2015, bringing PNG beans to Wellington to make into their first bar from the region. He describes the people of PNG as "super-friendly" and remembers their crew being greeted by musicians playing traditional music and dancers.

"It was quite an emotional experience arriving at Bougainville. The forests and beaches were untouched, and people were living in harmony with nature," he says.

Gabe describes the new limited-edition bar as being like biting into a chocolate brownie not long out of the oven - delivering a buttery mouthfeel with notes of vanilla and a hint of rum and raisin.

"South Pacific beans and Melanesian cocoa beans have interesting flavour characteristics, compared to the Forrestero beans on the Ivory Coast and in Ghana which grow fast and are farmed at pace," he says.

"Cocoa trees in PNG are often grown alongside other food and shaded by larger trees, including the Canarium Indicum or 'Galip Nut' tree, an indigenous tree that produces the most delicious, sweet nuts in the shape of giant almonds".

Gabe says agricultural exports are important to PNG and make up around 25 per cent of the country's GDP.

"Traditionally, cocoa has been sold on the commodity market at a low price; however, with growing demand for high quality, traceable beans, we are seeing producers get a better price for their cocoa which improves their standard of living. We are delighted to be working with Fairtrade to deliver a fairer future for farmers, the communities they support and the environment - and continuing our relationship with the people of Papua New Guinea," he says.

Fairtrade is also releasing a Good Fortune Coffee made with coffee beans farmed in PNG. You can read more about the project here. You can buy the bar exclusively online here.

Nestled in the heart of Eva Street (Wellington's most sought-after foodie laneway) Wellington Chocolate factory has been lovingly handcrafting New Zealand's finest small-batch chocolate since 2013. New Zealand's original, organic, bean-to-bar chocolate producer, it is leading a chocolate revolution, and offers 'true to the bean' flavours, with nothing added except what matters, allowing the taste and real character of the beans to shine. Making great New Zealand chocolate that's organic, sustainable, and contributing to a better world, Wellington Chocolate Factory sources only the highest quality beans from ethical suppliers - supporting local farmers and ensuring fair trade; creating a better world, one bean at a time.