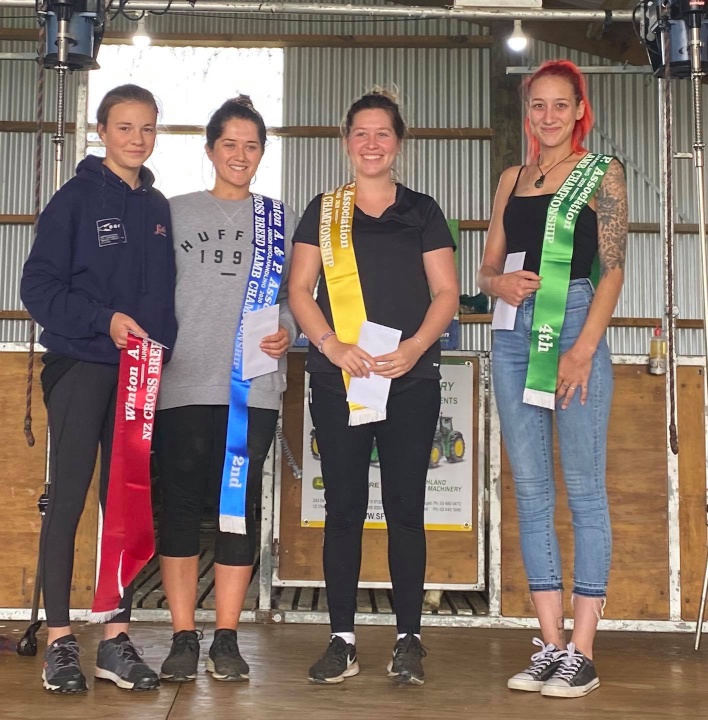 Big day for Charis and family at Winton

There was maybe a new-star born as 14-year-old Charis Morrell won the Junior woolhandling final at the Southland Shears national lambs shearing and woolhandling championships at the Winton A and P Show on Saturday.

It was her first win, but not her first moment in the shearing sports spotlight, in a career that started at the top as an 11-year-old partnering with mother Gabriella Schmidt-Morrell to give the mum’s native Switzerland a presence at the 2017 World championships in Invercargill.

It was a big day at Winton for Charis and fellow daughters of former champion shearer Dion Morrell, with World teams champion Pagan Karauria winning the Open woolhandling final for a fourth time, and sister Larnie Morrell placing third.

The runner-up in Saturday’s Junior final was Heaven Little, from Masterton, who the previous day added the Northern Southland Community Shears title on longwool to her first win, at the New Zealand Spring Shears title in Waimate in October.

In the Open final Karauria continued an exceptional sequence of national titles, being the first to win the national finewool, spring shears, corriedales and lambs titles in one season, but still seeking a first win in glamour North Island events the Golden Shears Open in Masterton and the New Zealand Shears Open in Te Kuiti.

Runner-up in the final was Keryn Herbert who has twice won the Winton title, in 2011 and 2013.

The Senior woolhandling final was won by Gore-based Krystal Schimanski, whose only previous Senior win had been the New Zealand Woolhandler of the Year title in Balclutha two years ago.

He’s now won both the New Zealand Lambshearing Championships at Fairlie’s Mackenzier Shears and the crossbred lambs title in Winton twice in a row.

Finish the six-man final over 20 lambs each in 16min 41.5sec, he was 13 seconds quicker than the next man off but also had comfortably the best pen-judging marks to win by a comfortable 3.68pts from eventual runner-up Casey Bailey, from Riverton.

RESULTS from the Southland Shears and New Zealand Crossbred Lambs shearing and woolhandling championships at the Winton A and P Show on Saturday, January 18, 2020: