The final countdown to The East Pointers NZ tour is on! 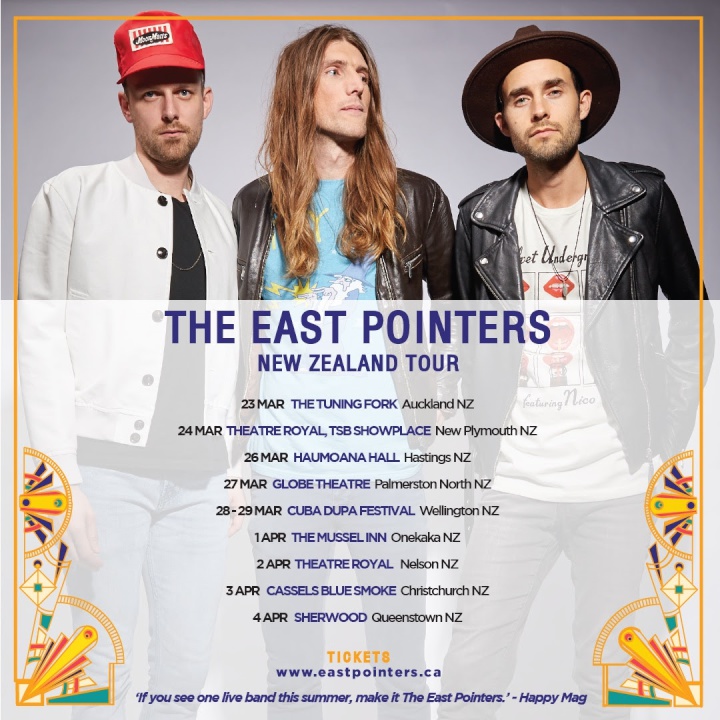 The return of Canadian alt-folk act The East Pointers to southern shores is now just weeks away.

The award-winning trio are touring their critically acclaimed new album YOURS TO BREAK and will touch down in New Zealand in late March for a 10-date tour.

The tour kicks off at the Tuning Fork in Auckland on March 23; before winding its way down through both islands, with a stop-off in Wellington for the famed CubaDupa Festival on March 28 - March 29, before finishing at the Sherwood in Queenstown on April 4. See below for a full list of dates and venues.

The East Pointers will be supported by folk singer-songwriter and multi-instrumentalist Lucy Farrell at all shows, except for CupaDupa.

No strangers to New Zealand, The East Pointers first caught the attention of local music lovers when they performed at WOMAD in New Plymouth in 2018. The band was surprised to find themselves charting just behind Adele in New Zealand after WOMAD, which they still describe as one of their favourite festival appearances.

Late last year, they firmed up their reputation as Kiwi faves with the release of their 10-track album YOURS TO BREAK, which highlighted the complexity of The East Pointers’ traditional Celtic core with fiddle tunes grounded in rumbling bass lines. On the record, a dirty Americana exploration turns on a dime into a lighthearted guitar feature with flamenco reference palmas, playful keyboard tones turn traditional solos into urgent dance-party journeys, and off-the-leash festival jam sessions give rise to vocal numbers that are either perfect pop songs or moving tributes to the home and people they love.

YOURS TO BREAK followed 2017’s WHAT WE LEAVE BEHIND, which was nominated for the Traditional Roots Album of the Year at the 2018 JUNO Awards and attracting over four million streams on Spotify.

Don’t miss your chance to catch one of Canada’s most loved live acts in New Zealand in a town/city near you.