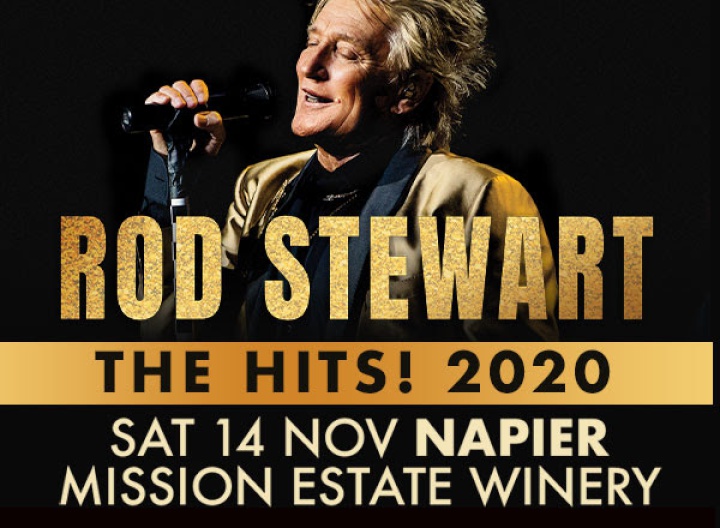 RETURNING TO NEW ZEALAND FOR THE HITS! TOUR
A 50-YEAR CELEBRATION OF HIS STELLAR CAREER

The performance will be part of his The Hits! world tour -- a 50-year celebration of his stellar career, a career highlighted by extraordinary performances at The Mission in 2005 and 2012.

The Mission is a venue that Rod loves and that love affair is most definitely mutual. With his tickets selling out in record times, concertgoers have declared his past performances as “the best ever”.

”The Mission winery is one of my favourite venues in the world,” said Sir Rod.

Mission Concert promoter James Erskine, Chairman of Sports and Entertainment Limited, says he’s beyond thrilled that Rod is returning to the Mission Concert.

“We’ve had such a wonderful relationship with Rod over the years so it’s an honour to be included in this milestone tour. We can’t wait to see him again. Rod has sold more tickets than any other artist in the Mission’s 28 years. It will be a night not to miss.”

Phil Hocquard, Chairman of the Mission, added: ”We are excited to have Rod back. The Mission is a unique and special place to watch concerts and people love coming here.”

Get in the queue today by becoming a Concert Club member. Register now at www.missionconcert.co.nz

As a singer and songwriter his many hits include “You Wear It Well”, “You’re in My Heart”, Tonight’s the Night”, “Gasoline Alley”, “Every Picture Tells a Story”, “Mandolin Wind”, “Sailing”, “The Killing of Georgie”, “Young Turks”, “Forever Young”, “Hot Legs”, “Infatuation”, “Da Ya Think I’m Sexy?”, “Some Guys Have All The Luck” and the indelible, “Maggie May”.

Stewart has earned countless of the industry’s highest awards, among them; two inductions into the Rock and Roll Hall of Fame, GrammyTM Living Legend.

In 2016 he officially became “Sir Rod Stewart” after being knighted at Buckingham Palace for his services to music and charity. He has performed for millions of fans on six continents, even holding the record for the largest-ever free concert, for an estimated 4.2 million in Rio de Janeiro on New Year’s Eve in 1996.

At the very top of his game Rod completed a triumphant stadium tour last year, followed by one of his biggest national UK tours ever, with live performances running throughout November and December in 2019. In addition, he also toured the USA, with highlights including a series of headline shows at Caesars Palace in Las Vegas as part of a multi-year residency and three sold-out Hollywood Bowl concerts in September in LA for a landmark reunion set with his former bandmate Jeff Beck.

YOU’RE IN MY HEART: ROD STEWART WITH THE ROYAL PHILHARMONIC ORCHESTRA pairs classical vocal tracks from his most popular songs with new arrangements performed by The Royal Philharmonic Orchestra. The music will also be available to download digitally and via streaming services and is available to order https://wma.lnk.to/RodRoyalPR
ROD STEWART
THE HITS! TOUR 2020
NAPIER MISSION ESTATE SATURDAY, 14 NOVEMBER