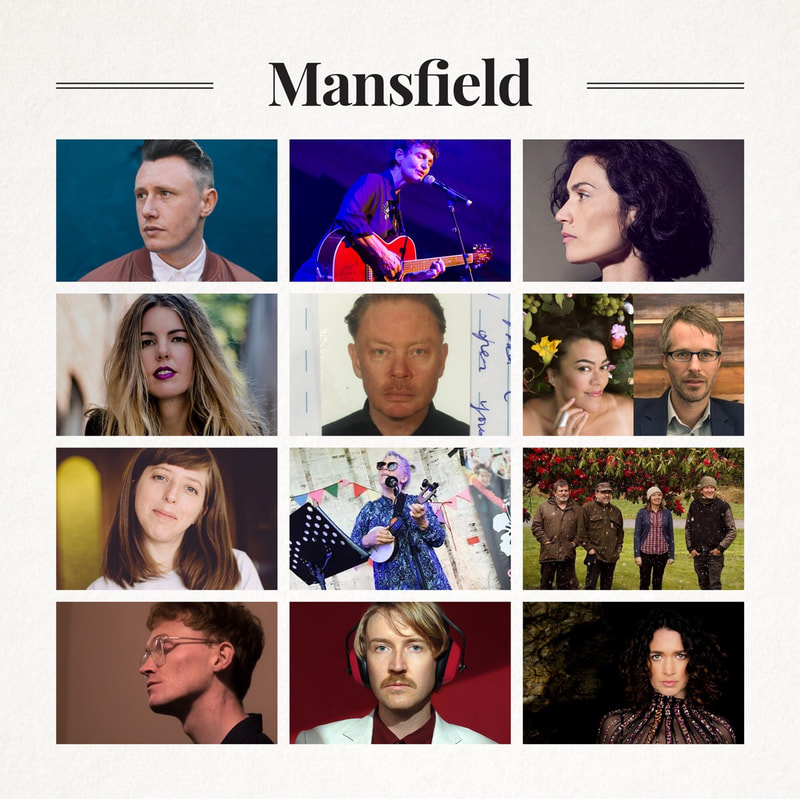 “I believe her to be a dangerous WOMAN … She is simply one of the most persistent and thickskinned toadies … one of the vulgarest women … and a sentimental crank.” - T.S. Eliot, Letters, Vol. 1.

Although it may be heresy for many to admit it, Katherine Mansfield was one of those unfortunate writers, like the degenerate Algernon Swinburne a few years before her, whose meagre output is of far less interest than their fascinating and complicated lives. Her vapid verses are of even less interest than her over-rated and pedestrian short stories, and Kiwi singer-songwriter Charlotte Yates has risen to the challenge of producing a compilation album by a variety of Kiwi recording artists to accompany some of her poetry. Entitled simply Mansfield, it encompasses a wide variety of musical approaches, ranging from alt country, pop, and folk, to way beyond. Fortunately, Mansfield's scribblings are elevated to another level by such talented and diverse artists as Anna Coddington, Lawrence Arabia, Lontalius, Mel Parsons, Godfrey de Grut, Will Ricketts, Toby Laing, Louis Baker, Lorina Harding, Delaney Davidson, Julia Deans, The Bats, and French for Rabbits. For some reason, the pared down guitar-and-vocal format of Mel Parsons and Lorina Harding seems to fit Mansfield's words best and Yates herself delivers one of the strongest songs on the album with a strangely David Bowie-inflected vocal. There are a few really interesting surprises, such as the experimental electronic doodlings de Grut employs to support Tusiata Avia's spoken word recital, and the rest of Captain Yates' motley crew provide a broad assortment of musical stylings that are richly rewarding over multiple hearings.

Yates is a curious Wellington character, having secured her place on the NZ music scene since her first album, the cleverly entitled Queen Charlotte Sound, came out in 1991. Since then she has been compulsively prolific, releasing seven of her own solo albums, as well as several collaborative and compilation works. Yates directed the 1993 and 1994 Melbourne Fringe Arts Festivals and studied Contemporary Music Technology and Composition at La Trobe University during 1995. Her second album The Desire and the Contempt was recorded in Sydney and won the Singer-Songwriter category at the 1997 Wellington Music Awards. Thirty of her lyrics were collated as One Lady Driver, published in 1999, while more were included in How You Doing, an anthology of NZ comic verse, and the Spring 2017 edition of Cafe Reader. In 2001, she released her third album Dead Fish Beach, followed up by Baxter, a well-received compilation of his poetry set to music by twelve NZ recording artists.

Yates was artist-in-residence at the Christchurch Arts Centre in 2002, where she concentrated on songwriting and guitar performances. She toured extensively with fellow singer/songwriter, the late Mahinaarangi Tocker and a live album of their concerts was released in 2002. Her fourth solo album Plainsong came out in 2003. Yates was commissioned by Toi Maori Aotearoa to produce Tuwhare, a compilation CD where NZ recording artists set poetry by Hone Tuwhare to their music. Tuwhare was released in 2005. she produced and directed the subsequent concert series at the Wellington Town Hall for the 2006 NZ International Festival of the Arts and the Auckland Festival in 2007. Her fifth solo album Beggar's Choice was released 2008, after which she directed and produced Ihimaeara, a CD of lyrics by Witi Ihimaera set to music by top NZ recording artists for the 2011 Auckland Arts Festival. Her sixth album, Archipelago, was co-produced by Gil Eva Craig and came out on Universal Music in 2013. In 2016, Yates directed and produced the Tuwhare Tenth Anniversary Concert presented by Toi Maori Aotearoa at the Wellington's Opera House, and her seventh studio album, Then the Stars Start Shining.

Charlotte Yates and special guest artists will perform tracks from the album Mansfield at the Wellington Opera House on June 13 and Auckland's Bruce Mason Centre on June 20.