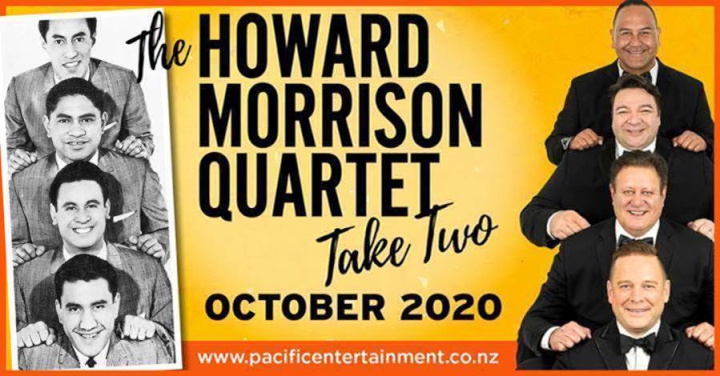 The Howard Morrison Quartet is considered this country’s most successful show band that helped to create the NZ entertainment industry. Merging family-friendly music with unique Kiwi humour, they toured constantly during the 50’s and 60’s, reformed regularly, and, throughout the subsequent decades remained hugely popular. The charismatic lead singer, the iconic Sir Howard Morrison, also enjoyed a stellar solo career over many decades, and won the love and respect of his country for the huge amount he gave back to the community. Timed to mark the 10 year anniversary of Sir Howard’s passing, this show will bring the old quartet back to life with superb vocals, entertainment, and first hand family stories through the talents of the next generation led by Howie Jnr.

Howard Morrison Jnr has literally been brought up on the stage to a life in the entertainment industry. This would initially be as a cultural ambassador, starting from the age of five performing for tourists along with his cousins to become an award-winning leading figure in Kapa Haka for over 40 years where his talents could flourish and hold the limelight away from that of his superstar farther. His passion for Kapa Haka would take him around the world many times representing his culture and country.

Another passion would see him become the face of the long-running Hunting Aotearoa television series, making him a household name to audiences in NZ, Australia, Samoa, the Cook Islands, Fiji and Hawaii. But with music and entertaining so much in his blood as it was for his father, the concert stage would always be a major attraction for Howie Jnr - yet somewhere that he had to be content with taking second place to the senior Morrison for many years. Over his professional music career starting with backing his father as a rhythm guitarist and vocalist, Howie has worked with many greats of the entertainment industry such as Sir John Rowles, Tui Teka, Billy T James, Frankie Stevens, Dalvanius, Dame Malvina Major, all the original members of his Dad’s quartet, and more. His sense of humour, quick wit and ability to communicate with people from all walks of life have also provided him with constant work as a professional MC and guest speaker both nationally and overseas.

For the last ten years Howie has worked closely with friends, Russell Harrison and Chris Powley, both also successful solo artists, as the Howard Morrison Jnr Trio. The trio are dedicated to preserving the legacy of NZ’s greatest entertainer and the showband genre. Their strong male voices and easy banter work well together, resonating with audiences throughout NZ and the Pacific resulting in many tours over the past 10 years showcasing their impressive vocal harmonies and the classic songs of yesteryear mixed with the well-loved modern.

Russell Harrison is one of NZ’s most recognised and diverse entertainers. Well known for his time in television as a Lotto presenter and on The Singing Bee, he has also appeared in many musicals such as West Side Story and Grease, popular films What Becomes of the Broken Hearted and Mt Zion, and is a regular guest MC for major events including Christmas in the Park. In addition to appearances with The Howard Morrison Jnr Trio, Russell performs regularly with his own RnB and soul group, The Brown Brothers, and The Hit Men performing the music of the Rat Pack and Motown amongst international engagements in Asia and the Pacific.

Multi-talented Chris Powley is an award-winning entertainer and Gold recording artist. Recognised as one of NZ’s best male voices, he has performed alongside international artists such as Andrea Bocelli and Bonnie Tyler and many local celebrities, including of course, the late Sir Howard. He has directed and performed in many large scale outdoor concerts, was the director and star of the long-running popular Daytime Variety concerts series at Auckland’s Sky City Casino, and continues to showcase his talents on luxury cruise ships around the world.

Andre King joins the vocal trio as the fourth member of the new Howard Morrison Quartet. A professional comedian and actor, he has headlined top comedy theatres throughout the UK, Europe and Asia and performed alongside comedy luminaries Jimmy Carr and Bill Bailey. His television appearances include local comedy productions such as, Auckland Daze and The Almighty Johnsons, and with the BBC. A former member of the NZ Military, he also regularly entertains the UK and NZ armed forces. His 2012 sold out show in the renowned Edinburgh Fringe festival entitled An Audience with The King received five star reviews for his quick fire one-liners and observational clean humour, making him the perfect candidate to take on the role the late Gerry Merito played within the original Howard Morrison Quartet.

Fortunately, due to Covid-19 these busy performers are able to take time out from their international commitments to organise this long-awaited national tour in honour of Howie’s Dad and his much loved quartet. The Howard Morrison Quartet Take Two will faithfully recreate a trip down memory lane for the followers of the original showband, plus add new songs and some magic of their own. Even those not old enough to remember the original icons will be impressed by this super-group of NZ talent.