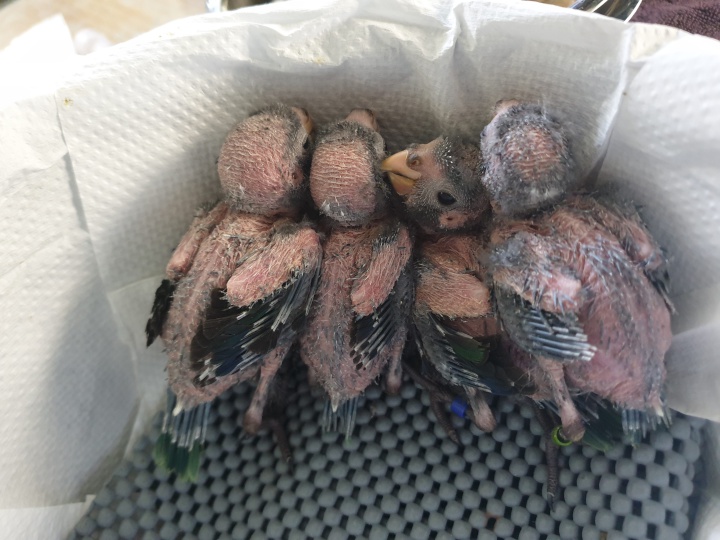 
Mount Bruce, Masterton: Pūkaha National Wildlife Centre has managed to hand rear five orange-fronted parakeets (he kākāriki karaka) from its first clutch of the 20/21 breeding season. The parakeets are Aotearoa’s rarest and were declared extinct twice in 1919 and 1965. Today their wild population number is just 100-300 individuals.

Successful hand-rearing of orange-fronted parakeets is considered extremely unlikely but Pūkaha had very little choice. The five chicks hatched in early August from one of the centre’s two breeding pairs, a male called Karaka and a female called Pōra. Not wanting to disturb the nest, it wasn’t until two weeks of age that captive breeding rangers noticed that the feathers on the chicks were not developing. A closer inspection revealed that the chicks were bald and that their feathers had been plucked by the birds’ parents. Immediate intervention was required because the chicks were at imminent danger of dying from the cold. The only option for the parakeets’ survival was an attempt at hand-rearing.

The procedure is rarely undertaken because of how unsuccessful it is. For orange-fronted parakeets there is a real chance of imprinting during the process which would be detrimental for any long-term survival in the wild. With no other options, the National Species Co-ordinator, Anne Richardson from The Isaac Wildlife and Conservation Trust, granted permission for Pūkaha to try and save the parakeets using hand-rearing methods.

With approval given, the young chicks were immediately placed in brooders with heat lamps and fed a diet of parrot rearing formula. During this time handling was avoided and human contact minimalised wherever possible. It took about three weeks for the chicks to get their feathers. Today some six weeks later, all five chicks are fully grown, flying, and eating by themselves. None show signs of imprinting.

The successful outcome is in large part due to the experience of two of the centre’s captive breeding rangers; Jess Flamy and Tara Swan. Team Leader Flamy has over 15 years rearing knowledge across a variety of bird species. She spent nine of these years honing her craft at The Hatchery in France which specialises in hatching 300 different bird species.

Flamy said, “We were thrown a very rare occurrence, and were forced to react or these critically endangered parakeets could have potentially died. Given the choice we would not have attempted hand-rearing, but there was no other choice.” Flamy went on, “We are very happy that our collective experience was able to lead to a successful outcome.”

Whilst the wildlife centre acknowledged the rare feat, it hoped to not have to repeat it again in the near future.


About Pūkaha: Pūkaha National Wildlife Centre is a wildlife reserve and captive breeding facility managed by the Pūkaha Mount Bruce board in partnership with Rangitāne o Wairarapa and the Department of Conservation. Through captive breeding, they have successfully reintroduced North Island Kākā, North Island Brown Kiwi and North Island Kōkako into their unfenced forest reserve (formerly part of the original 70 Mile Bush). Pūkaha aims to educate and inspire the general public about conservation and New Zealand wildlife through their Visitor Centre, daily talks and educational programmes. Pūkaha also works with whio (blue duck), pāteke (brown teal), and kākāriki.

About the orange-fronted parakeet Breeding Programme at Pūkaha: Pūkaha National Wildlife Centre first received orange-fronted parakeets in 2009. In February of 2020 the centre managed to breed four of the parakeets for the first time. Pūkaha is one of just four breeding sites for the species across New Zealand. The parakeets are listed as critically endangered. They are currently severely threatened and at high risk of extinction.