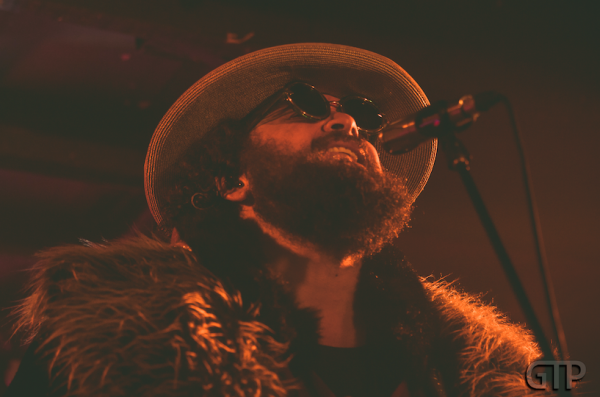 Award-winning Northland musician Troy Kingi recently released “All Your Ships Have Sailed,” the first single from his new record The Ghost of Freddie Cesar, the fourth installment in his 10/10/10 series - ten albums in ten years in ten genres, beginning with the psych-funk Shake That Skinny Ass All the Way to Zygertron (2016). Following hot on the heels of the blues-inflected Guitar Party At Uncle’s Bach (2017) and his politically aware roots reggae album, Holy Colony Burning Acres (2019), The Ghost of Freddie Cesar delves deep into the archives of seventies funk. Standout tracks include “Shake That Skinny Ass,” a funk fest with a reggae horn line and hook chorus, “Is The Honeymoon Gone?”, "Caught In The Rain," and “Through My Venetians” - all of which immediately slot into an intricate and eminently danceable drum and bass groove, then layer harmonic vocal textures, horns, and guitar solos on top in a manner reminiscent of Marvin Gaye.

At Wellington's San Fran on Friday night, Kingi ably demonstrated that he can also steam-roller over lightweights like the Average White Band (“First Take Strut”) and the Doobie Brothers (“Chronophonic Disco”), and rock out into Hendrix territory ("Nam Must Stay" - maybe a pun on 'namaste'). It takes a lot of nerve, plus a unique sense of sartorial elegance, to wear a cape on stage (Sun Ra and George Clinton come to mind), but Kingi pulled it off with both perspicacity and aplomb. Judging by the enthusiastic reception of the appreciative audience, many were already familiar with much of the old material and eagerly soaked up every acoustic nuance of his latest offering.

A graduate of The Music and Audio Institute, Kingi is approaching the mid-point of his 1O/1O/1O series, which may be why he experienced such a palpable sense of relief when he completed the album after recording had been interrupted by the lockdown and the long cathartic process finally came to an end. The new release is his most personal work to date - “I was super proud. I remember finishing that last track and this weight lifted off my shoulders that I didn’t have to keep trying to remember these songs anymore and in a way my own personal connection to my missing father was complete,” Kingi told Music 101’s Charlotte Ryan. The confounding backstory behind the album's genesis begins with the tragic disappearance of Kingi’s father and the chance discovery his notebooks and a cassette tape - “My dad, my real father, around Christmas time 2005, he was driving back from Rotorua to Auckland and completely disappeared, like off the face of the earth.”

Kingi, who was born in 1984 in Rotorua, sought desperately for any clues - “There were helicopter searches on the road between Rotorua and Auckland. The whole lot of our whanau drove down and searched. I remember we searched and we ended up sleeping in the Mamaku’s. There’s a little park there on the side of the road. There were four or five of our cars. That’s a scary place. I hate that place. I hate traveling through there at night and the thought of him maybe still being there having gone off into the gully or something makes it even freakier. I hate traveling through there at night, it’s always misty.”

In 2010, Kingi re-discovered the notebook with all the lyrics inside, but was unable to locate the cassette. An accomplished screen actor who has appeared in Mt Zion, The Pa Boys, Violence, and Hunt for the Wilderpeople, he was no stranger to such dramatic scenarios. He decided to re-create the songs himself and “went on a search for Freddy Cesar, and he's nowhere, he doesn't even exist, I can't find him nowhere, no one knows who he is. So the covers of these songs are from what I remember when I last heard them in 2007. They’re [Freddy’s] hooks mixed in with my own bits and pieces, because I can't remember full songs. That's when I decided to find out who Freddie Cesar was … It’s kind of a dedication to my dad and Freddie Cesar, this album. Even though the lyrics aren't fully mine and the music’s not fully mine, I feel him when I’m singing these songs.”

Despite sporadic reports of sightings, no reliable clues were ever found. When Kingi’s mum asked him to pick up some of his missing father’s belongings in 2005, he came across the cassette - “It looked pretty old and had this hand-scribbled name, ‘Freddie Cesar’ on it, and on the back was just handwritten names of songs. I recognized some of the songs from my early childhood back when my parents were still together and started writing down the lyrics as a form of therapy.”

Much of Cesar’s life remains a mystery, but listen closely to the lyrics and it becomes evident that Kingi imagines him as a Vietnam War vet who struggled with drugs, alcohol, and his inability to settle down with PTSD on civy street. Kingi interprets this era as a propulsive, soulful, funk-fuelled period and paints portrait of Cesar life and times.

“[The cassette] was a shitty recording too, it was a live recording as I remember ... It's kind of a dedication to my dad this album, and even though the lyrics aren't fully mine, and the music's not fully mine, I feel him when I'm singing these songs.” Kingi has created a kind of cover album of songs that never really existed. When it came time to release the record, he realised that performing and promoting it would involve addressing issues that remained painfully raw and personal, as he explained to Alex Behan -

“When you have people that pass away, at least you have somewhere to go and grieve, at least you have a grave, but to have someone completely disappear is a whole other kettle of fish. I'd see a car that fit the description and look to see if it was the number plate every time we seen that colour car or that particular car for years. Then there was a moment where I was like 'I can't keep doing this, I gotta focus on my own family' and it was kind of then when you just had to let it go.”

“We started talking about what we were going to do with the press and I said I didn’t really want to talk about my dad. Just because I’m still in this funny spot because he’s been missing for so long and we haven’t had closure. It’s very personal but it went hand in hand with the album and it’s been hard. It hasn’t been nice. It’s definitely brought up memories. To be honest I haven’t really talked about my dad for a long time so it’s been a time of revisiting a lot of old stuff.”

“I always think about when he left 'cos I’ve got five kids, but only the oldest ever got to meet him which is super sad. To be honest, I didn’t really tell my family that I was going to bring this up and there’s probably a few that might prefer I didn’t. I dunno. I’m a man with my heart on my sleeve, so I just tell it as it is. The hardest thing [is] there’s just no closure, so I just feel incomplete. I’ve never talked about it. It’s just been a part of me for the last fifteen years and that’s become the new norm, that’s just how you feel. There’s always something missing or there’s always something not quite right. You’re not thinking about it every day but it’s just there.”

The experience may have dredged up many distressing memories for Kingi, but also opened up new avenues of conversation with his family - “My older siblings, my dad’s other kids, we’ve got different mothers but my mum and I have been talking about holding some kind of memorial or something just for ourselves. Just for peace of mind. I think it might be a good idea. Tangi, especially in Maori culture is a part of life, but it’s also the moment for whanau to grieve and cry and love each other. It’s an important phase to go through and we haven’t been through that. I think we should have a discussion about that.”

The Ghost Of Freddie Cesar by Troy Kingi & The Clutch was released last month on all streaming platforms.

This article originally appeared on Radio13