The Phoenix Foundation Rises From The Ashes (& Chris O'Connor Talks) 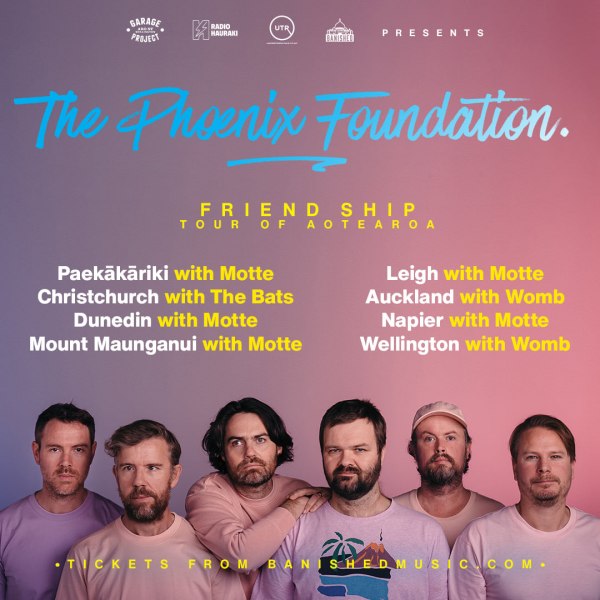 Simultaneously dreamy and structured, understated and subtle, spacious and hypnotic, The Phoenix Foundation may be forgiven for sounding as though they have recently inhaled.

Their hallmark sound generally includes gorgeous vocal harmonies, lilting lyrics with no lack of wry, self-deprecating humour, and gently weeping guitar parts. The band was founded by Conrad Wedde, Samuel Flynn Scott, and Luke Buda in 1994 while they were students at Wellington High School and took their name from a fictional organization on the TV show MacGyver. In 2001, they were joined by Tim Hansen (bass), Richie Singleton (drums) and Will Ricketts (percussion) and released their China Cove EP in 2000.

The Phoenix Foundation's first full-length album, Horsepower, included the singles “This Charming Van” and “Let Me Die A Woman” and was released in 2003 to critical acclaim, but little commercial success, despite receiving extensive airplay on alternative radio stations. In 2004, they began work on Pegasus, with Warner Emery replacing Hansen on bass. The album was released in early 2005 and eventually hit gold domestically. Later that year, they toured with the Finn Brothers and mounted their own theatre tour which included shows at the Wellington Opera House and Auckland's St. James Theatre.

Buda was the first to release solo material with his EP The C-Sides (2003), which featured the live favourite “Television Songs.” Both he and Scott released solo albums in 2006: Buda's Special Surprise showcased his love of synth pop and carefully crafted melody; while Scott's The Hunt Brings Us Life had a less polished texture and delved deeper into the kind of Americana roots music at which his songs on Pegasus had only hinted. The band recorded the soundtrack to Taika Waititi's film Eagle vs Shark, which premiered with great success at the Sundance Film Festival in 2007 (four years later, they also scored Boy for Waititi). The band then signed a deal with Young American Recording which distributed Horsepower in the US in March 2007.

Their third album, Happy Ending, was released in New Zealand in September 2007 on the Flying Nun label, and featured the single “Bright Grey.” The following year, they supported Split Enz on tour, Buda produced another solo venture, Vesuvius, while Scott released Straight Answer Machine, under the name Samuel F. Scott and the B.O.P. In 2009, Wedde, Ricketts, and Singleton all released their debut solo albums - Wedde's Bronze, Ricketts' John Dryden, under the name Wild Bill Ricketts, and Singleton's The Walls of the Well under the name Rebel Peasant. Scott and Buda also composed the soundtrack for Paul Middleditch's painful tale of marriage, bad sex, and requited love Separation City, which featured many Phoenix Foundation tracks.

2009 was a particularly fertile year for The Phoenix Foundation who released their Merry Kriskmass EP in December. It included songs that did not gel with the atmosphere of the band's fourth album, Buffalo, which was released in April, 2010. The album was released both on vinyl and as a digital download, together with The Do Son EP. Bass player Warner Emery left on amicable terms during the recording of Buffalo and was replaced by Tom Callwood, who had previously provided double bass on the Merry Kriskmas track “Forget It” and the cello part on “Happy Ending.”

In September 2010, the band announced a new record deal with UK record label Memphis Industries, which released Buffalo worldwide in January 2011. To coincide with the release, the band twice toured the UK and Europe. The record was generally well received by English critics, with The Guardian giving it a 5-star rating. In October, the band performed live on the BBC's Later … with Jools Holland playing two songs, “Buffalo” and “Flock of Hearts.” The album was shortlisted for the prestigious Taite Music Prize. That same month, Ricketts put out his second solo album, West Wind.

The Phoenix Foundation's fifth offering Fandango was also their first double album, released in April 2013 in New Zealand and Australia on Universal and internationally on Memphis Industries. The release was celebrated with a free download of the first single from the album, “The Captain,” and a UK/Europe Tour that summer in support of the album release. Fandango was recorded over fifteen months partly at Neil Finn's rural Roundhead Studios and partly at The Party Room in Dunedin, but mostly at the bands' own HQ, The Car Club in Wellington. The album was then mixed with the help of Fly My Pretties' Lee Prebble, a long-term associate, at The Surgery. Two different drummers took part in the recording session and in September 2012, it was announced that Richie Singleton was leaving the band to focus on his work for the environment. After twelve years playing with the band, it was another amicable split and soon afterwards he was replaced by Chris O'Connor.

The Phoenix Foundation next contributed covers to two tribute compilations - Fleetwood Mac's “Don't Stop” for MOJO's free CD Rumours Revisited and Tim Hardin's “Don't Make Promises You Can't Keep” for Reason To Believe - The Songs of Tim Hardin. The latter was released in January 2013 and received very positive reviews in the UK, with The Independent awarding it four out of five stars and mentioning the version of “Don't Make Promises” as one of its highlights. A BBC reviewer commented that "Kiwi experimental popsters The Phoenix Foundation call upon sublimely intelligent arranging skills to flesh out 'Don’t Make Promises'” and the song is still broadcast regularly on BBC 6 Music.

In August 2015, The Phoenix Foundation released their sixth studio album, Give Up Your Dreams, which included the singles “Mountain” and “Give Up Your Dreams,” and was also met with critical acclaim. The band then embarked on an eight-gig tour around Aotearoa in support of the album. Since then, they have been busy writing, recording, and touring with the New Zealand Symphony Orchestra, creating the acclaimed soundtrack for Hunt For The Wilderpeople, building shrines to light, creating virtual reality scores, producing other artists, and baking lots of sourdough. Made with the support of NZ On Air, their latest album, Friend Ship, was recorded in various sheds, garages, and bedrooms around the country and mixed by Lee Prebble at The Surgery, Wellington, and included the new single, ”Landline,” which was released earlier this month.

The first album that drummer Chris O'Connor contributed to was Fandango and he has been playing with them ever since. Even though he now lives in Auckland, Wellington remains very much his home town, where he was working with Tim Finn on a stage production at BATS, when the bass player suggested that he audition. The rest, as they say, is history.

There is a pernicious myth commonly accepted among the general public that rock drummers are thick as a brick and basically good for nothing but whacking the shit out a drum kit. O'Connor, however, appropriately enough for a band known for their droll onstage banter, is highly articulate, full of interesting ideas, and sharp as a whip. He recently shared the following thoughts on his early influences, collaborating with other musicians, and the healing power of music to revive and regenerate fresh life - much like the mythical phoenix itself.

What is your first musical memory?

I've always been fascinated by the noise component of simply living in the city. Growing up Lower Hutt, I used to play along to commercials on the radio. One of my earliest memories is lying in bed on Guy Fawkes night in Alicetown. The guttering had broken and rain was cascading down onto a concrete slab right outside my bedroom window. I was struck by the complexity of the intricate rhythms which reminded me of a crackling bonfire. I was amazed how something so cold and wet could sound so hot and fiery.

Music is so much more than just writing pop songs. It can come from the simplest and most natural, organic sources like footsteps crunching across gravel or the sound of waves rolling onto the shore. I love the idea of taking some dead object and bringing it to life, trying to co-ordinate the physicality of the process with the problem-solving aspects of complex rhythms.

What other drummers and recording artists influenced your music?

I was your prototypical bogun teenager, growing up in the Lower Hutt and rocking out to heavy metal bands like Deep Purple and Iron Maiden. I'll always remember first hearing John Bonham playing Led Zeppelin's “Black Dog” and bouncing around the living room like a bouncy ball.

It really depends on the circumstances. Each song is a little different, but generally the songs seem to arrive fairly well-formed. The other guys all record demos at home and often present their musical ideas and arrangements before bringing them to the rest of the band. At other times, the songs might be little more than the germ of an idea. One of the great things about playing in a band like The Phoenix Foundation is that there's always a great deal of flexibility and lots of room for collaboration.

After almost thirty years of recording albums, is there a greatest hits in the wings?

There is always lots of talk and no lack of vision, so who knows what the future will bring? We generally prefer to look forward and move ahead, rather than glancing in a rear-view mirror. That said, we would certainly consider playing old fan favourites like “Going Fishing” live occasionally. It's really just a matter of finding the right context and it might well happen.

What was the most challenging aspect of collaborating with the NZSO?

The hardest aspect was trying to weld together two very different musical cultures. Obviously, the way an amplified rock band rehearses and performs is very different from reading and interpreting a written score. Our arrangers Claire Blackbird and Hamish Oliver did a great job balancing the two approaches, as did Graham Kennedy who recorded their parts at Massey University's School of Music studios. Conductor Hamish McKeich was the interface that allowed it all to happen.

What was it like collaborating with Nadia Reid and Hollie Fullbrook (aka Tiny Ruins) on the recent singles?

Very harmonious, as I recall ... the singles were actually cobbled together in different ways. Sadly, I wasn't able to be present at the sessions with Holly and Nadia, who are two of my favourite musicians and both blessed with divine voices. Anita Clarke (aka Motte) is another wonderful singer/violinist who will be covering their vocal parts on the upcoming tour.

How did you stay sane during lockdown?

At the start of the year I was in Wellington, training for a music therapy qualification. The clinical aspects of the process can include anything from working with children who are socially challenged to palliative care for dementia and Parkinson's patients. When I returned to Auckland to be with my family, I was able to continue the course work on-line. I've always been fascinated by the potential healing power of music.

For those unfamiliar with The Phoenix Foundation 's prodigious output, here's a link to Nick Bollinger's RNZ sampler, which marked the tenth anniversary of Buffalo's release:

This article originally appeared on Radio13