Inside The King's Head - Katherine Wyeth's Girl in the Loft

Wednesday, 4 November 2020, 8:49 am
Article: Howard Davis
Inside The King's Head
- Katherine Wyeth's Girl in the Loft at BATS 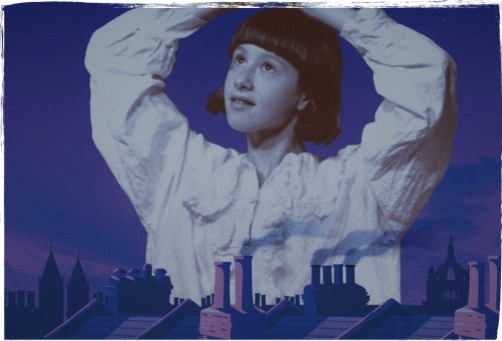 A one-woman show, written and performed by Katherine Wyeth under the direction of Fingal Pollock, this is the story of growing up at The King’s Head Theatre in London, observing its nightly transformation from the chaos of sawdust and sequins into a stage set, scampering across urban rooftops, and enjoying torrid backstage kisses, while also waiting tables and slinging slops behind the bar. Wyeth weaves together a dramatic tapestry of memory, identity, and legacy, exploring the changes of adolescence, motherhood, and ultimately self-acceptance - “Dreams fade. And stories that hide in boxes in the attic ... fade too. So, I wanted to tell my story to you - before it fades, as it must fade one day. Because that’s what we have as humans really - our stories... all the moments that snap together like magnets - to make a person, to make a life. The paper dreams we dream. The paper lessons we learn. The paper boats we sail on - to carry us away ...”

The King's Head Theatre was founded in 1970 by Dan Crawford with his second wife, Joan, as an alternative theatrical venue and it remains the second oldest operating pub theatre in the UK. Located in the back room behind the bar, it is housed in a Victorian building on Upper St., Islington, but a public house has occupied the site since 1543. Crawford ran the venue until his death in 2005, when associate artistic director Stephanie Sinclaire (now a Seatoun resident) took over, mounting twenty galas in the first year at the theatre with the help of ardent supporters such as Maureen Lipman and Sir John Mortimer, who helped pull the theatre out of debt. The atmosphere Crawford created was enjoyed by a sophisticated and cosmopolitan audience who enjoyed a wide range of productions, including musicals, stand-up comedy, revues, contemporary forgotten classics, and work by both new and established playwrights. Under the Crawfords' leadership, it won multiple awards and numerous successful productions transferred to mainstream West End and Broadway theatres.

The hand-to-mouth existence of the King's Head was part of its charm. The bar, with its bentwood chairs, gas lamps, and old-fashioned, ornate till (drinks were defiantly priced in pounds, shillings and pence for many years after decimilisation) remains a local institution. Its £60,000 Arts Council grant was cut in 1984 and the place was sustained by Crawford and his third wife, Stephanie Sinclaire, on minor grants and donations. Meals of variable quality were served before the show, while the backstage atmosphere, according to theatre critic Sheridan Morley, “made the Black Hole of Calcutta resemble a five-star hotel.” Crawford supported the early work of Victoria Wood and French & Saunders, gave Hugh Grant his debut, kick-started the Terence Rattigan revival with a superb production of The Browning Version, and was just as happy to have Christopher Biggins or Lionel Blair in revue as to welcome Mel Smith as a director.

Originally from Hackensack, New Jersey, Crawford was one of a number of enterprising Americans who helped bring fringe theatre to London in the late sixties. With invaluable experience as a barman and dinner theatre clubs, he chanced upon the crumbling pub which had not been decorated since 1938, but contained a back room that had once served as a boxing ring. Crawford leased the pub with £1,100 as a deposit on stock and furniture, which left him just £15 as float for the till when they first opened. He and Joan ran the pub by day, but by night he converted the back room into a theatre, which opened in December 1970 with a shaky production of Boris Vian's The Empire Builders. "It reminded me of things I'd seen in Greenwich Village a decade earlier," said Crawford. 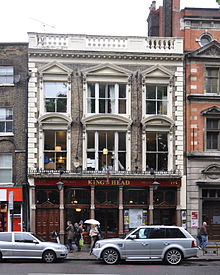 Unlike other high-minded fringe theatres of the day, the King's Head was really a commercial venue writ small, but two of the best new plays of the mid-1970s, Robert Patrick's Kennedy's Children and Stewart Parker's Spokesong had significant artistic impact as well as commercial success. The first palpable hit was John Fowles' The Collector, which had been turned down all over London. There were also revivals of lesser-known plays, including Tom Stoppard's radio dramas Albert's Bridge and Rough Crossing, a persuasive look at Noël Coward's valedictory A Song At Twilight with Corin Redgrave, and revivals of forgotten warhorses like Daphne du Maurier's September Tide (with Susannah York) and Enid Bagnold's The Chalk Garden, as well as the London premiere of Eve Ensler's The Vagina Monologues.

It was typical of Crawford and Sinclaire that they should launch the Heather Brothers' rock'n'roll show, A Slice Of Saturday Night and follow it with a tribute to Vivian Ellis, who was best man at his wedding to Sinclaire and virtually forgotten until their revival of Mr Cinders. Dick Vosburgh and Barry Cryer combined on the irresistibly lowbrow A Saint She Ain't, directed by Ned Sherrin, David Kernan arranged tribute shows to lyricist Dorothy Fields and Broadway belter Ethel Merman, Lesley Joseph and Celia Imrie appeared in separate solo shows written by Stewart Permutt, Leigh Zimmerman strutted around the stage in a play by Carl Djerassi, and Peter Straker sang show tunes straight from the Jaques Brel songbook.

After Crawford' death, productions included the world stage premiere of Leonard Bernstein's Peter Pan, directed by Sinclaire, and Fucking Men, which ran for nine months. In 2007, Sinclaire was joined by Tony-Award winning producer Steven M. Levy, who together presented several musical and play premieres. The theatre's financial survival was always in jeopardy and none of this could have happened without Crawford and Sinclaire's dedicated commitment. Writing in The Guardian, Steven Berkoff noted that there was “no one like him” - “His enthusiasm matched his judgment and you knew you were in safe hands. He liked my plays and championed me, and it helped to know that there was a place where you could try your work and be respected and fiercely encouraged. Basic, honest, earthy, the King's Head worked for me, and it felt right being there. We all need an ally and it is so hard working on one's own, battling unsavoury reviews, and the conservatism of the establishment … Perhaps what suited me was its down-to-earth decency that spread out from Dan and invaded the whole pub and theatre. It brought a sense of the old backstreet theatres of 1950s New York to London.”

Girl in the Loft recaptures all the heady excitement of those early years from the point of view of their ridiculously talented daughter, Katherine. Combining physical storytelling, puppetry, lyrical dialogue, and the powerful sound and AV design talents of Jason Wright and Johanna Sanders, it also features a songbook of musical theatre favourites, with accompaniment by J. R. Ballantyne. For more behind-the-scenes action, check out the wonderful documentary The King's Head: A Maverick in London, co-directed by Sinclaire, which ran on Sky ARTSWorld for three years.

Girl In The Loft runs from November 5-14 at BATS Theatre, Wellington.