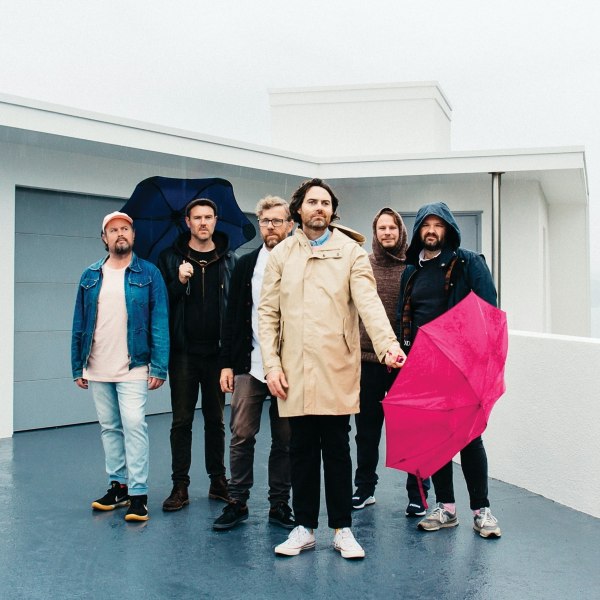 It's impossible to dislike The Phoenix Foundation - they're just such affable chaps with an enviable talent for finding a crisp hook and sticking to it. It's hard to spend much time in Wellington without someone letting you know they grew up with these guys, or went to the same school as them. So a sense of local pride was certainly running high at the Opera House on Saturday night, as the lads ran through a tasty little set drawn mostly from their latest album Friend Ship (splash out for Xmas on the shocking pink extra-thick vinyl edition). All very dry in that delightfully understated Kiwi way, it was hardly surprising that Brett Mackenzie and Jermaine Clement from Flight of the Conchords were both in the house.

The Phoenix Foundation have always been considered an eclectic and quirky bunch, blending together aching harmonies with highly ironic lyrics. Their last two albums were decidedly esoteric and psychedelic, but Friend Ship is a more focused and disciplined effort, each song constituting its own carefully-crafted vignette. The band has a heady ability to frame some strange subject matter with their spacious, yet detailed pop arrangements, and the result is their most personal and engaging work since their 2010 classic, Buffalo, with space-age synth echoes of Pink Floyd and The Beatles thrown in for good measure.

Samuel Flynn Scott, one of the band's two lyricists/vocalists, originally wanted to call the latest album 'Anxiety', as he admitted in a recent episode of Final Mix - “These themes of modern anxiety started to emerge in my songs ... The album is sort of a post-apocalyptic love letter from the future to the present. Looking back into the past for that sense of human connection we have lost in our screen-based existence … Everything comes back to anxiety on this record.” Friend Ship is a more accurate title, however, especially as the first two singles feature vocals from such friends of the band as Nadia Reid and Hollie Fullbrook (Tiny Ruins). Fullbrook sings on "Tranquility", written by the band’s other main songwriter Luke Buda. “This song is so beautiful and calm and has such a beautiful sentiment,” joked Scott. “It’s just really hard to believe that Luke came up with it.” Reid contributes to Scott’s "Hounds of Hell', a song that addresses the fear of climate change, but ultimately “it’s a song about love persevering through hideous upheaval and uncertainty.”

Released in October, Friend Ship was the band’s seventh album and their first since 2015’s Give Up Your Dreams. In the interim, they have been busy recording soundtracks for film and television under the name Moniker. Friend Ship was also delayed due to various members signing up for such exciting extra-curricular activities as composing with the New Zealand Symphony Orchestra, recording the soundtrack for Taika Waititi's Hunt For The Wilderpeople, and creating VR scores. Returning to a more personal style of songwriting took some time - “It was quite an effort to fully emotionally engage [at first], but then when we did, it’s a more honest album than we’ve made in at least ten years.” Their recent tour of Aotearoa proved it has been well worth the wait.

The set opened with the album's opening track, "Guru', which bitterly demands we question all those false prophets and charlatans like Mooji who claim to sell Enlightenment to the world's walking wounded. On "Miserable Meal", Buda described the joys of domestic life - "all aboard the SS Shithole, listing now for several years … I'm packing my bags and I'm jumping ship / What a time to find out I don't know / how to swim." These sense of impending disaster was undercut by Toby Laing's beautiful horn and string arrangement, which suggests a cheerful sense of ease and acceptance. Similarly, "Hounds of Hell" was about companionship at the end of the world, as Scott assured a loved one, "You won't be alone / When the sunlight turns to fire" to a swirling harpsichord-led accompaniment.

The celestial "Transit of Venus" travelled a lilting, oneiric path across the heavens featuring the NZSO and some pretty impressive whistling, while the funky popping bass on "Landline" infused the power of old-school connections with some sparkling disco-pop and the terse new wave punch of "My Kitchen Rules" got the audience on its feet. Two other Buda-fronted songs revisited the past, one reviewing his entire life, the other focusing on a single night. "Former Glory" depicts his childhood as an Eastern Bloc immigrant, from 'lining up for flour' in his homeland to 'learning to talk again', dealing with a bully in his adopted country, and eventually 'start[ing] a band with my best friends'. "Decision Dollars" is a cathartic and alarmingly accurate morning-after song - 'We could have taken it easy / Imagine how that would feel / Fresh as a summer's breeze on the Pyrenees'.

The Phoenix Foundation may have grown into sophisticated tunesmiths over the years, but if Friend Ship's day-glo 1980s themed artwork seems a little arch and over-determined, two songs in particular raised the bar several notches - the almost unbearably melancholy "Tranquility", more an impression than a song, with Buda and Fullbrook lamenting a time 'before the age of insanity / Got its grip on me / And the rest of the world', and the hauntingly plangent "Trem Sketch", which closes the album with the realization that 'Here comes that sinking feeling / That I'm wrong' and a pledge that 'I'll be anyone that comes to mind' to save a relationship. Friend Ship dares to suggest that there is something still worth saving after all.