For spectators and Ford fans at Taupō Historic GP meeting at Bruce McLaren Motorsport Park on 23/24 January, the celebration of Ford’s motorsport heritage will be boosted by the appearance of an ultra-rare and genuine 1965 Shelby Mustang GT350R, one of only 37 special “full race-spec” Shelbys ever built. 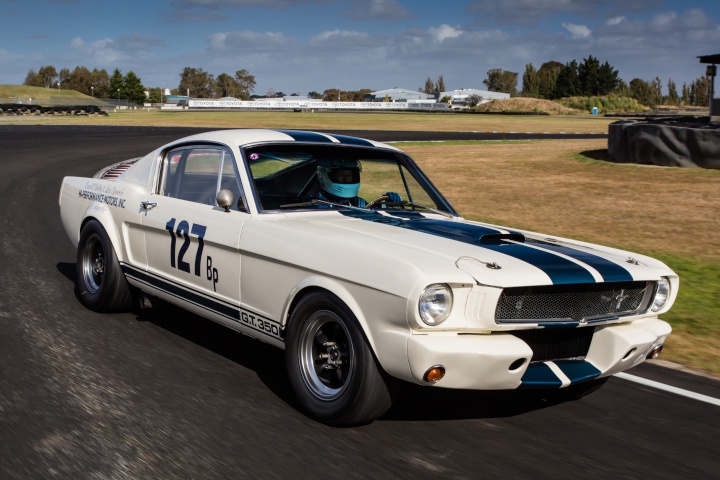 The GT350R’s iconic reputation and image were recently boosted by its role in the “Ford versus Ferrari” movie, with extensive footage of Ken Miles behind the wheel in the very first GT350, testing, developing and racing in the halcyon days of 1960s motorsport and Ford’s track success.

The Shelby GT350R at Taupō has been privately owned here in New Zealand for 17 years, and has never appeared at a public race meeting in the North Island. Originally factory-built as a road going GT350 in July 1965, and sold by Carroll Shelby’s own dealership Hi Performance Motors, the car was subsequently converted to full GT350R specifications by Shelby and campaigned by its owner in the SCCA racing class.

Like all factory GT350Rs, this car features a host of Ken Miles’ proven modifications and development, including race-spec engine upgrades, enhancements and blueprinting, extensive body modifications and lightening (500lbs was saved), race instrumentation, side exit exhausts, and much more. In its later life, this particular car featured as the hero car for the world famous BF Goodrich tyre advertising campaign.

“This GT350R adds a unique perspective to the Taupō Historic GP meeting and the celebration of Ford’s motorsport heritage, because whilst it never raced in New Zealand, it is the ultimate and genuinely original expression of the legendary Mustangs that have dominated New Zealand tracks since the late 1960s in the hands of Ivan Segedin, Paul Fahey, Rod Coppins, Red Dawson, Frank Bryan, Leo Leonard and so many more. It will be on public display throughout the Taupō race weekend” says organising committee member and Ford aficionado, Garry Jackson.

“We’re all looking forward to seeing it on track with demo laps.”

“Don’t miss it! It might be another 17 years before it makes another appearance” say Jackson.

The Taupō Historic GP runs over two-days, 23 and 24 January 2021. As well as races for historic muscle and saloon cars, the event features demonstrations of many historic Ford racing and rally cars, races for Formula 5000, Formula Junior, Historic Sports Racing and other Invited Historic Cars, Historic Formula Fords, Historic Sports Sedans & Allcomers and Tranzams, plus displays of Ford models spanning 60 years of motoring in New Zealand assembled by members of multiple Ford-Owner clubs from around the country.