Sixteen of New Zealand’s top racing drivers are all set to race in the 66th New Zealand Grand Prix this weekend and there’s huge interest in what is being billed as an historic Race of Champions. 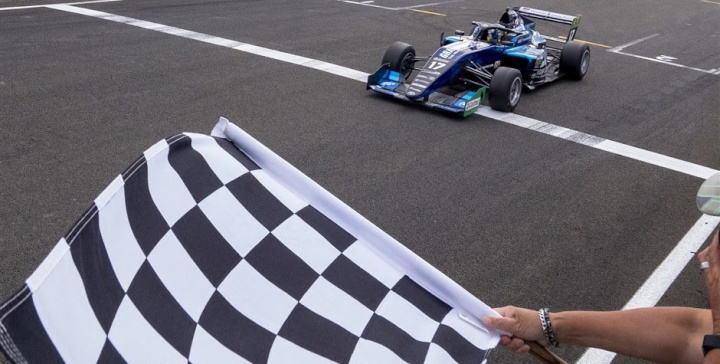 Igor Fraga takes the Grand Prix chequered flag in 2020. Which Kiwi will win it this weekend and add their name to an illustrious list? Picture Bruce Jenkins

With the pandemic travel restrictions accounting for the usual international entrants, it’s turned into an all-Kiwi affair. It is arguably the most interesting field in a New Zealand Grand Prix for a generation with the best of the past, present and future all on the grid for the big race.

It’s also a highly significant weekend for one of the country’s legendary sporting and motorsport heroes.

Kiwi icon Kenny Smith will make his 50th start in a New Zealand Grand Prix and most of the field he will be competing against have enjoyed his help and advice over the years as they’ve climbed the racing ladder.

The impact of COVID has also had a significant impact on the four teams that traditionally run the Castrol TRS Series. The reduced rounds and restrictions on resources entering the country have meant that in partnership with TGRNZ this year’s series will see all four teams combine and work together under the TGRNZ banner. As a result all drivers will have access to data and information and there will be no teams’ championship this season. In acknowledgement of this initiative the engineering and technical resources will also be wearing uniforms representing all four teams.

There will be FIA Super Licence points – the key to climbing the international motorsport ladder - up for grabs for the drivers. However, a proportion of what the FIA normally offer to the series will be allocated to the top drivers running the full, but condensed, three round championship.

There’s a good prize pool available to the sixteen drivers this weekend too, with $5,000 up for grabs for the Grand Prix winner and $3,000 and $2,000 going to the second and third place finishers respectively.

Interest in the championship - and of course the Grand Prix specifically - has been huge both domestically and internationally. A good crowd is expected with corporate hospitality at the Hampton Downs circuit sold out earlier this week.

With van Gisbergen, Heimgartner and Murphy racing, interest from Australia has been significant and the Grand Prix qualifying, warm up races and main event will be live in New Zealand on Spark Sport and live streamed to the rest of the world on the Motorsport.TV platform.

Racing icon Smith will set a remarkable record this weekend too and if he starts the Grand Prix he will set another new record for FIA sanctioned Grand Prix races (including Formula One) that is highly unlikely to ever be beaten. The names of drivers he has competed against over the previous decades reads like a Who’s Who of motorsport royalty and he’s won the race no fewer than three times as well.

At the ripe old age of 79 he'll need a few stars to align if he's to win against such stern opposition, but ever the true professional, Smith has been busy recently getting up to speed in his older generation TRS car after injury.

With no previous races to gauge form and with this being the first time the Castrol Toyota Racing Series cars have ever competed on Hampton Downs’ long 4km international circuit, picking a winner is tricky to say the least.

For big names likely to shine look no further than Shane van Gisbergen and André Heimgartner. Shane is the current Bathurst champion, a former V8 Supercar champ, 2007 TRS Championship runner up and a driver who really is at the top of his game. He's fast in literally anything he has driven and is guaranteed to be in the mix as the weekend progresses.

Heimgartner too is as sharp as a razor and was immediately quick when he tested the Toyota FT60 for the first time. This is his first NZGP and he is highly motivated to win before returning to Australia. Murphy - another former GP winner - might be one of the older drivers in the field but he'll still be fast.

Fitness over the 28 laps might be his biggest challenge, but he's been working on that and has done several tests and longer runs in the FT60 around Hampton. All of that will help with his endurance.

Two time Grand Prix winner Dan Gaunt, former A1GP NZ racer Chris van der Drift, Tom Alexander and former TRS racers Chris Vlok and the Leitch brothers Brendon and Damon could all excel. All are fast, skilled and accomplished racers who know how to win. Each and every one of those six are stepping into their cars this weekend with the full intention of being at the sharp end of the grid.

Van der Drift is sponsored by legendary Kiwi racing team Tasman Motorsports in what is another fascinating aspect of the weekend. Winning the New Zealand Grand Prix is a bucket list item for Tasman's Steve and Christine Horne to list alongside their Indy 500 and many Indycar victories, and you can bet theirs will be a well-drilled, highly motivated assault on the GP title.

Then there's the young guns. Every year the Castrol TRS attracts the top young single seater talent in the world and that includes the top Kiwis. This year is no different. Kaleb Ngatoa, Matthew Payne, Billy Frazer, Peter Vodanovich, Josh Bethune and Conrad Clark have all won in their respective racing categories ahead of their TRS debuts.

Most, if not all of these young up and coming racers would have probably been in the Castrol TRS series this year anyway had there not been the COVID-19 factor. All would have been gunning for success in a quality international field. Like their rivals and peers, they all know how to win races and championships and can be expected to have race winning pace when the weekend gets underway.

As for a favourite? It genuinely could be any one of the 16 runners who adds his name to this most prestigious of prizes at the end of 28 laps on Sunday. But the major winner in these challenging times is the event and as Murphy explained, this is a unique sporting occasion for New Zealand and world motorsport fans.

“I’m in not because I thought I could win the event,” he said. “I grew up with single seater racing and the New Zealand Grand Prix means so much.

“We need to realise how prestigious this event is not only in New Zealand but on the world stage. I want to support that and we have some great milestones with Kenny Smith’s 50th start; that really is something to celebrate.

“I’m honoured to have the opportunity to be a part of it, to support it and put my weight behind it and to help make people realise just how important an event this is. And for this particular Grand Prix, you could say as Kiwis it’s the strongest and most interesting line-up we’ve had maybe since way back in the 80s or 90s.”