Local Theatre Company Makes A Splash With Pool (No Water)!

Do you ever think about how all of your friends are more successful than you?

Do you ever hate them?

Ponder these questions at Pool (No Water) …. 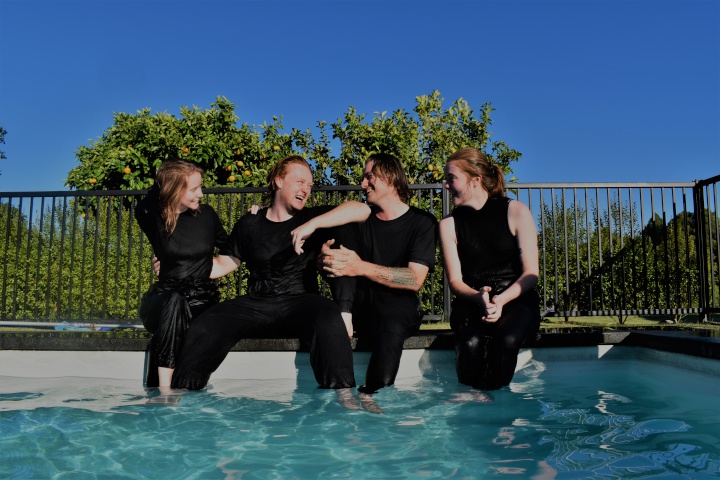 One Question Theatre presents Mark Ravenhill’s Pool (No Water) at The Meteor Theatre for a limited season running, March 18th-20th 7PM and you’re invited to come and watch as four very shallow people trap themselves in the deep-end…

Reunited at a funeral ‘The Gang’ is invited to stay at the manor of an old friend, a veritable colossus whose work has been shown in galleries across the globe. But when they all go for a late night skinny-dip in their host’s pool, there’s an accident… an accident that may well make them famous… And after having tread water for so many years can you blame them for pouncing on any opportunity? However sordid it may be…

A must see for artists and theatre goers alike. Pool (No Water) explores the depths of pettiness that can be reached when a friend exceeds those around them in this darkly comedic and comically dark play about creation, for creators.

Cast member Kate Durie says of the show: “I always find it a fun process, making a character come to life. Especially so when that character is rather cruel. It’s a nice challenge when a character’s actions push against and beyond the social norms. It’s so much fun to test those limits.”

Having previously presented Jean Paul Sartre’s seminal psycho-drama No Exit, Hamilton based company One Question Theatre are back at the Meteor with this equally thought-provoking follow-up. A journey, equal parts hilarious and depraved, into the twisted nucleus of artistic jealousy. Watch on as ‘The Gang’ lie, cheat, steal and burn their way to the top with no thought to those kicked to the bottom. Pool (No Water) explores and interrogates the purpose of art, how it’s intent can be warped, and how it can be used as a vehicle for the self-absorbed, giving voice to a thing that lies dormant, jealousy.

Director Jack Knowles calls the play ‘An exercise in liberation from social expectations, for both the performers and the audience. We are all aware of the capacity for pettiness inside of us. The stage is the perfect place to allow ourselves to explore that, and revel in doing so’

Take a dive. Scour our mutual depths of pettiness with the One Question team at Pool (No Water). Tickets are available now at themeteor.co.nz , $15 Student $20 General Admission.