Join artist Billy Apple and Adam Art Gallery Director Christina Barton for a performance of the recorded sound piece, Glass Transformation, 1972. This is the work’s first presentation in Wellington and is programmed to coincide with Kate Newby’s major exhibition YES TOMORROW, which also features works made with broken glass collected for the occasion. 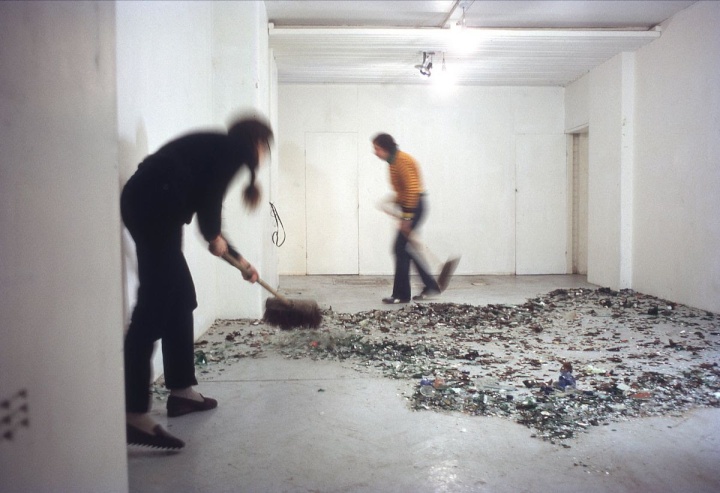 The sound recording is the only tangible remainder of a three-part project conceived and executed by conceptual artist Billy Apple and experimental composer Annea Lockwood over three years between November 1970 and April 1972. Glass Transformation was first presented on the evening of 7 April 1972 at 98 Greene Street Loft, an alternative space run by Holly and Horace Solomon in New York City. It features the recorded sounds of broken glass being swept, crushed and sieved and is presented in total darkness so that aural sensations are intensified. The piece will be introduced by Barton, who draws on her account of the event in her recently published monograph Billy Apple® Life/Work (Auckland University Press, 2020). Billy Apple will answer questions after the performance.

Billy Apple (born 1935, New Zealand) is recognised as a leading figure in the histories of pop and conceptual art. He studied at the Royal College of Art in London between 1959 and 1962 and, after moving to New York in 1964, was a pioneer of the alternative art scene, running his eponymous gallery ‘Apple’ in his loft at 161 West 23rd Street between 1969 and 1972. It was at this stage in his career that he undertook and documented a range of everyday activities, including collecting broken glass from the streets of Manhattan. This was typical of a new kind of practice that challenged the conventions of artmaking and tested art’s ability to be commodified and collected. Billy Apple returned to New Zealand in 1990 and now lives and works in Auckland.

Annea Lockwood (born 1939, New Zealand) is an experimental composer and performer recognised for her focus on found and environmental sound as well as for her compositions incorporating text-sounds, performance, electronics and visual effects. In 1961 she left New Zealand to study composition at the Royal College of Music in London, going on to attend courses in electronic music in Germany and Holland. She settled in the USA in 1973, where she has remained to this day. In the 1960s and 1970s she collaborated with poets, choreographers and visual artists, including Billy Apple, meeting the artist in 1969 and sharing her fascination with glass, which had manifested in her series of Glass Concerts and which led to their collaboration on Glass Transformation.

Find out more about our full public programme associated with the exhibition YES TOMORROW here.