MeloYelo e-bikes is helping EVolocity take their electric vehicle high school offering to new heights with the launch of a new programme – the EVolocity Innovation Lab. 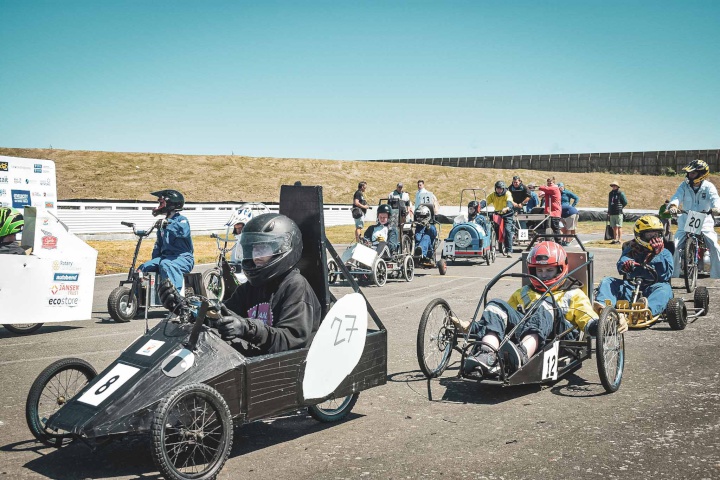 Students lining up for drag races

By supplying a brand-new e-mountain bike, a Bafang 300-watt mid-drive motor kit, and a 13Ah lithium-ion battery to a qualifying team in each of their operational regions, EVolocity and MeloYelo aim to inspire innovation and an entrepreneurial spirit.

Qualifying teams will not only be required to retrofit their bikes with the Bafang motor kits, they will also be tasked with adding an innovation of their own creation and ultimately preparing a sales pitch for their bike and original new design element, to sell the bikes at auction. EVolocity will support students through a series of online workshops with a range of professionals, including electric motorcycle racer, engineer and record breaker, Eva Hakansson.

“Kiwis are renowned for their innovative, out-of-the-box thinking,” says MeloYelo director, and founder of EVolocity, Rob McEwen. “Through the EVolocity Innovation Lab, we are giving high school students an opportunity to conceive of and create a product that can be added to an electric bike, and which enhances the value of the bike.”

EVolocity has long held the belief that young people are some of our best innovators. That’s why they bring high school students together around the concept of designing and building electric vehicles from scratch, which they then compete with at regional and national level events. The new EVolocity Innovation Lab will take this ingenuity to the next level by encouraging students to conceptualise and design original features that will enhance the value of real-life e-bike riding experiences.

EVolocity was founded on three key tenets. Turning young people onto the joys of innovation and engineering, and addressing New Zealand’s national skills shortage in this area. Fostering a new generation of drivers that are comfortable with electric vehicle technology, while educating them about the environmental and economic benefits of EVs. And finally, providing young people with a practical way to engage with sustainability and make a positive impact on climate change.

"EVolocity is about developing future generations of innovators and the Innovation Lab provides a real-world platform for our young people to use their creativity to take a concept right through to a marketable product." says Chief Executive Sarah Fitzgerald. "This program fosters entrepreneurship and team work while recognising and celebrating success."

Registrations close on June 22, after which teams will have six months to develop and produce their bikes into a finished product. The bikes will then be auctioned off with proceeds from the auction being split between EVolocity and the winning teams.

Open to all schools in EVolocity’s operating regions including those already enrolled on EVolocity’s flagship Electric Vehicle Build programme, this initiative is an exciting addition to a remarkable high school offering. To learn more about the EVolocity Innovation Lab, go to their website