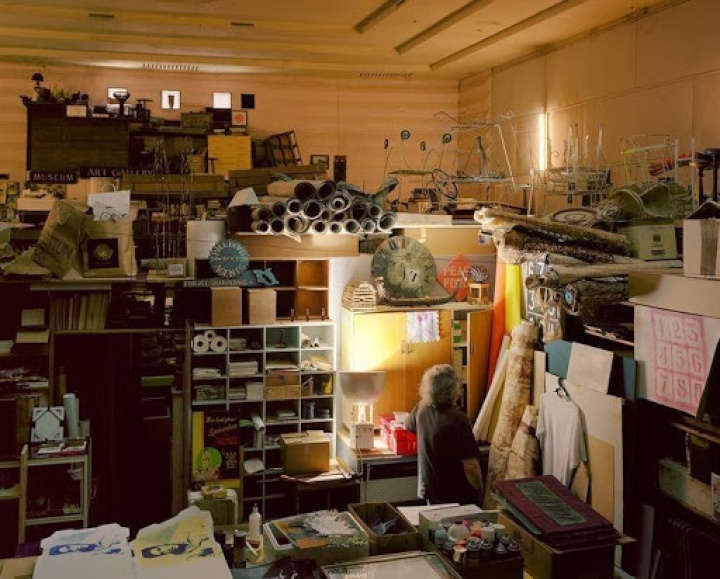 John Perry at his home at home, in his shop in Hellensville, West Auckland

With attendees expected in the 100’s, Webb’s is welcoming media outlets to cover this event in the hopes of sharing the celebration of this iconic figures life with the wider nation.

If you’ve been anywhere in the art world in New Zealand in the past 50 years, you will have come across John F. Perry. New Zealand’s artistic and cultural landscape was greatly diminished, when John Perry the artist, obsessive collector, ex museum curator, arts writer for AASD and other publications but most importantly friend / mentor to many, passed away at home above his shop Global Village Antiques in the old Regent Cinema in Hellensville, West Auckland on 6 June 2021.

John led a rich and fascinating life, with his interests and knowledge wide, ranging from New Zealand art (especially folk and outsider art), decorative arts and tribal artefacts. He knew about rock art and weaving and ceramics. He loved coral, shells and woven baskets, early photography, abstraction and printed ephemera. Once he asked me to go and look at his collection of Australian art which comprised bark paintings, aboriginal spears and other similar objects. His all-time favourite piece was a Navajo blanket he bought in the 1970s for $1.50 at a flea market. He delighted in the offbeat and quirky, it all had a story that he was compelled to share. He could see value and importance in everyday pieces and he was a champion for them.

Not just a collector, John was an oral historian (in the unofficial sense of the word). He went to Elam (the Art School at Auckland University) in 1960 and quickly became totally involved with the small local art scene. Influential tutors and such as Kees Hoss, Robert Ellis and Kurt von Meier opened his eyes to the new directions and ways of working happening internationally. Later, he joined forces with Barry Lett and together they ran Uptown Gallery, showing the work of emerging and young contemporary artists. John had a wealth of anecdotes and stories from these days. Often I would remark on a work in an auction catalogue and John could tell me a story about it, from where and when it was produced and his personal connection with it. He had a great memory and could just as easily recall a memory about Colin McCahon as he could a piece of information about some very obscure artist who no one else would remember. He would casually refer to many of the giants of New Zealand art history by their first names – Colin (McCahon), Theo (Schoon) and Tony (Fomison) such was his personal association with so many of them.

Apart from running Global Village Antiques his legendary shop for the latter part of his life, he was most known for his role as the Director of the Rotorua Museum, where he started in the late 1970s and remained for 10 years with great vision, passion and foresight. The museum didn’t have much of an art collection when he came onboard and he spent his tenure acquiring pieces of significance to Rotorua for the collection as well as curating exhibitions, including his most celebrated Fibre and Feathers in 1982 which highlighted and elevated Maori weaving, an overlooked aspect of traditional Maori craft at the time.

In the latter part of John’s life he multi-tasked, acting as an advisor for the Rotorua Energy Trust continuing to purchase works of the wider Rotorua area for their collection. He attended almost every art auction, always arriving early and parking out front with his white van, which was always packed with his latest puchases. He opened his shop on the weekends, undertook valuations, gave collection advice, did a bit of framing. Never one for technology or the internet, he preferred to be out and about sourcing his wares although once he got the hang of using the internet, he used to spend hours at night looking at the collections of international galleries and museums. His emails to me were a work of art in themselves, artfully spaced with capitals and lower case all perfectly designed on the page, his artistic bent shining through in the most mundane of activities. He loved a pun, a play on words and abbreviations. Visitors to Global Village Antiques were often offered the ‘GT’ – or Grand Tour and he had recently mused about changing the name of Global Village Antiques to ‘WOW’ - Way out West. His auction reports on AASD dating from 2016-2017 are definitely worth a reread, full of John’s humour and anecdotes.

He and I attended a lot of auctions together and John with his excellent selection of scarfs, his woven kete carrying his catalogue and his deep and thoughtful knowledge about New Zealand and its rich and wonderful history will be sorely missed. I will certainly rue J.P’s absence in the back row of the auction room.

Briar Williams is an Art Valuer and Auctioneer who has worked in the primary and secondary markets of New Zealand and Australia for over 15 years. In Melbourne she managed a commercial gallery and was a valuer at Leonard Joel Auctioneers & Valuers before becoming Head of Art there in 2009. Most recently, she was the manager of the art department at Mossgreen-Webb's in Auckland and currently works as an art writer and consultant.