Wellington-based indie rock band, Voodoo Bloo, have joined forces with Boneface Brewery to create a beer of their own, a hazy pale ale. 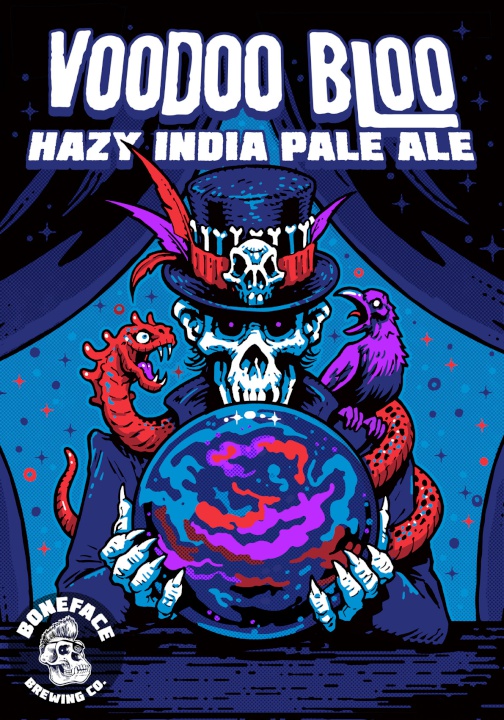 The idea came about from Tony McDonald, manager of Voodoo Bloo, and his passion for craft beer.

“I approached the owner, Matt Dainty and he was so keen that the same night he and Sophia, jumped in their car and drove down to Valhalla to see Voodoo Bloo play a gig. They loved the music so much that they said yes immediately. The band also love craft beer and are very excited to be part of this,” says Tony.

McDonald also used to be the proud owner of 1500 empty bottles strong beer collection but sold the collection to convert his bar into a studio. This allowed them the recording of the first album, JACOBUS during the first Covid-19 lockdown

Wellington has been praised for its inherent coolness for decades and is famously known as Aotearoa’s Craft Beer Capital. It also boasts an incredibly vibrant music scene with a strong sense of community and a wide range of talent.

With a lot of musical inspiration behind many of the Boneface Brewery beer names, it was a match made in heaven.

“The band possess a sound that is both unique and yet familiar, marrying influences of eclectic indie melodies with heavy punk distortion and youthful, raucous energy (think Arctic Monkeys meets IDLES). When these guys reached out to us about a potential collaboration, it was certainly a no-brainer,” says Dainty.

“Brew day” took place on July 22 and 23 with the band being invited into the brewery to help assist with the creation of the beer.

It’s still in the early stages of brewing so a release date is yet to be confirmed, but Boneface is hoping it will be ready to roll out just in time for Beervana (August 13, 14) where Voodoo Bloo are set to perform.