Brooke Donoghue and Hannah Osborne rowed themselves into New Zealand Olympic history with a silver medal in the women’s double sculls in Tokyo today. 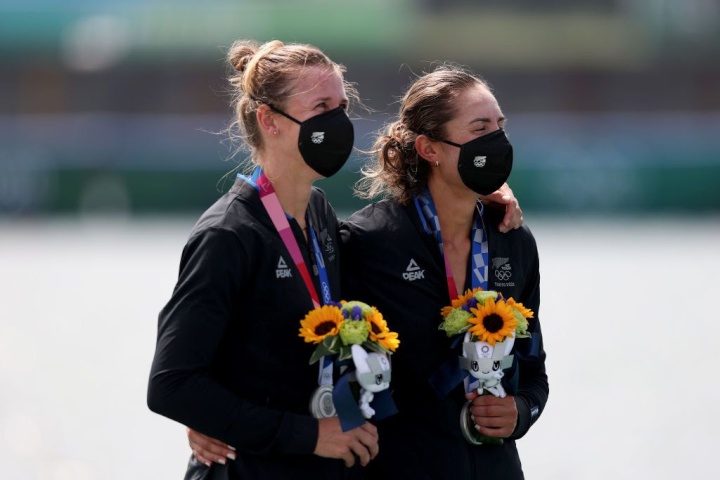 The New Zealanders went into the final with good credentials. They won their heat comfortably and finished second to the mighty Romanian team in their semi-final.

In the final the Romanians, Ancuta Bodnar and Simona Radis, were again far too strong, but the New Zealanders were a clear second throughout.

For Donoghue, 26, and Osborne, 27, their silver medal was vindication of a relatively late decision for them to team up in the double sculls. Donoghue had previously formed a world championship-winning combination with Olivia Loe and Osborne had rowed primarily but not solely as a single sculler.

Moments after the race, Donoghue described herself as “pretty overwhelmed”.

“It was an awesome race. We did our best and I’m so glad to have a medal,” she said. “I’ve been thinking about this moment every day for the past two years and to put it even wider than that, every session for the past 11 years. So it’s just huge and to finally get it done is crazy.”

New Zealand has excellent credentials in Olympic women’s double sculling – Caroline and Georgina Evers-Swindell won the gold medal in 2004 and 2008.

There was more good news for New Zealand when the women’s pair of Grace Prendergast and Kerri Gowler won their semi-final in imposing fashion. The New Zealanders were timed at 6min 47.41s, three seconds ahead of Russia with Spain in third. They were also quicker than any boat in the other semi-final.

Things did not go so well for the New Zealand men’s pair of Brook Robertson and Stephen Jones in their semi-final. Needing a top 3 placing, they finished at the tail of the field in 6min 41.46s, 28 seconds behind the winners, Romania.

In the final race of the day the New Zealand men’s eight – Tom Mackintosh, Hamish Bond, Tom Murray, Michael Brake, Daniel Williamson, Phillip Wilson, Shaun Kirkham, Matt Macdonald and cox Sam Bosworth – needed only a top 4 placing in a field of five in their repechage to make the final. But they were not content to sit back and won the race in dominating style in 5min 22.04s from Great Britain, the United States and Australia, with Romania the team to miss out.