New Zealand had a super evening in the Olympic velodrome when Ellesse Andrews and Campbell Stewart won silver medals for New Zealand. 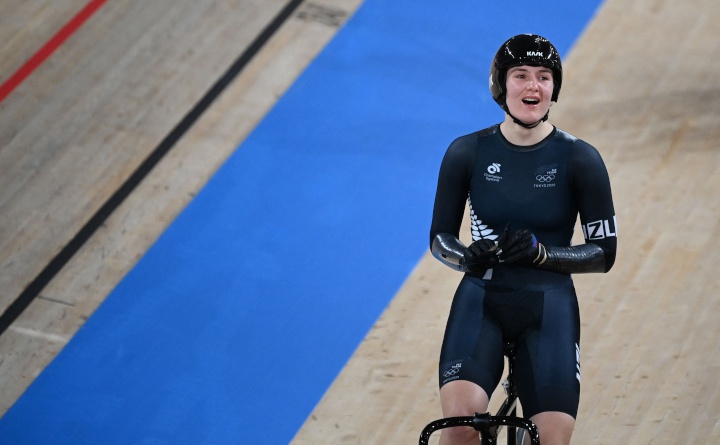 Andrews, just 21, announced herself as one of the rising stars of women’s cycling by grabbing a hard-earned silver in the women’s keirin.

Shortly after, Stewart picked up a silver in the four-event omnium when he rode a clever points race to vault himself from seventh to second overall. Stewart was not even supposed to be riding the omnium, but Aaron Gate had to withdraw after he crashed yesterday and suffered a broken collarbone. Stewart was a fine replacement – he was the 2019 omnium world champion.

She turned on a good performance in her quarter-final. The New Zealander trailed the derny, but once the race proper was under way she stormed into the lead and was strong enough to take second place, when the leading four riders were to progress.

In her semi-final, she was content to stay in last place until the derny departed, then put in a big burst to go all the way into the lead and trusted to her strength and speed to stay there right to the finish, a long time to hold off the field. To Andrews’ credit, she judged it perfectly, taking second place between Ukrainians Olena Starikova and Liubov Basova.

Andrews’ bold ride put her into the final, where six riders vied for the three medals. Andrews hung back in fifth for the first part of the journey then eased to near the front. In the final frenetic sprint, she proved very strong and flashed across the line behind Dutchwoman Shane Braspennicx, holding off Canadian Lauriane Gerest for second.

For the 21-year-old Andrews it was a just reward for an extremely good day of racing and continued a fine family tradition of cycling – her father Jon won two cycling bronze medals for New Zealand at the 1990 Auckland Commonwealth Games.

The tears flowed afterwards for the Cambridge-based Andrews.

“In a keirin you have to get the absolute right balance of physical effort and tactical execution, so to get that right today and get a silver medal is amazing. I'm so proud of myself,” she said.

Stewart was always prominent in the four-event omnium, which featured 20 riders.

In the opening 10,000m scratch race, he finished seventh. A leading bunch of five broke away to claim the top spots and Stewart was second home after that lead group.

In the second event, the tempo race, where the leader after each lap gains points, Dutchman Jan Willem van Schip put a lap on the field. That virtually assured him of winning the race.

Stewart picked up just 2 points during the race.

After the first two events, van Schip and Briton Matthew Walls led the event and Campbell was in 10th place.

Next up was the elimination race, in which the last-placed rider at the end of every second lap drops out, a real test of endurance and tactics. Stewart raced well until there were just five riders remaining. He was then boxed in and could do nothing about it. Italian Elia Viviani won the race.

In the points race, Stewart got himself into medal reckoning by gaining a lap on the field early on, to earn 20 points. After that he was always handy, picking up his share of points for various lap sprints. He still wasn’t among the top placings until he picked up another lap near the end, which changed everything. Stewart actually earned the most points of anyone in the field in the omnium.

When the overall points were added up, Walls took the gold with 153 points, Stewart was second with 129 and Viviai was third on 124.

Later Stewart was quick to give credit to the rest of the New Zealand team. “I could hear them yelling for me. It kept me going,” he said. “I was out there riding solo, but I had all that support.”

He singled out Gates who, arm in a sling, hugged Stewart and congratulated him on his fabulous medal effort.

In the men’s sprint, Sam Webster was unable to progress to the quarter-final today.

In the 1/8 final, he was outsprinted by the German, Max Levy. Webster rode strongly into the final lap but the German came over the top and took the New Zealander in the race to the line.

Webster then had to win the repechage but was outkicked by powerful Sebastien Vigier. “I gave it everything,” he said, “but I just didn’t have that little bit extra in the legs today.”