History tends to assign Olympic Games to a particular athlete, team or event. 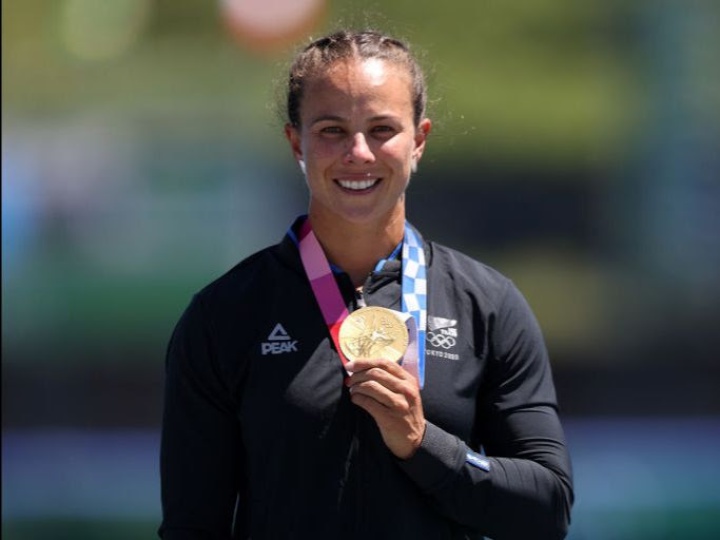 And in New Zealand’s eyes, the Tokyo 2020 chapter of Olympic history will come to be remembered as Lisa Carrington’s Games.

She returns to New Zealand as this country’s greatest Olympian, with six medals, five of them gold and one bronze, overtaking great medal-laden athletes such as paddlers Ian Ferguson and Paul MacDonald, eventing legend Sir Mark Todd and shot putter Dame Valerie Adams.

Back in 1964 Sir Peter Snell dominated, also in Tokyo. In 1972 at Munich, New Zealand's rowing eight gold had brawny men on the dais with tears running down their cheeks as God Defend New Zealand rang out.

In 1984 Ferguson led New Zealand into the then little-known world of canoeing; in 1996 in Atlanta, Danyon Loader was the name on every sports-loving New Zealander’s mind for his two freestyle gold medals.

Carrington’s performance in Tokyo was nothing short of stunning, from the flying windmill arms providing a lightening start, to the formidable drive and concentration down the course to the finish.

She paddled in 12 races in the space of six days, and made four finals. Not only did she win her third consecutive K1 200 gold medal, but she branched out, winning golds for the K1 500 and K2 500 and ended her staggering campaign with a fourth placing in the K4 500.

Rowing's celebrated double gold medal twins Caroline and Georgina Evers-Swindell of the 2000s inspired a generation of young schoolgirls to take up an oar. In similar vein, Carrington is sure to place an Olympic aspiration in the minds of girls swept up in a remarkable week of canoeing.

Quite apart from Carrington, the Tokyo Olympics offered New Zealanders a formidable number of athletes and performances to celebrate.

The Games were beset by problems with Covid-19. They were delayed a year and in the lead-up this year there were reservations about whether they would go ahead. But they did, and once the sport began talk of Covid-19 fell away.

It was terribly unfortunate for the Japanese that they were not able to pack the stadiums with spectators, but it must be said they ran a magnificent Olympics. The athletes certainly appreciated it.

From a New Zealand viewpoint, several athletes who were Games veterans had another shot at glory.

Emma Twigg, at her fourth Olympics, finally won a prized gold medal in the single sculls, a fairytale story. Also at the rowing, Hamish Bond came back after a spell as a cyclist and helped the New Zealand men’s eight win the gold (his third Olympic gold), reviving memories of that famous 1972 crew. The women’s eight all but made it a big boat double, before having to settle for silver.

Two members of the women’s eight, Grace Prendergast and Kerri Gowler, had already won gold in the women’s pair, while Brooke Donoghue and Hannah Osborne claimed silver in the women’s double sculls. It was a rowing medal bonanza.

As we’ve come to expect from our track cyclists, there were more medals – this time to rising star Ellesse Andrews in the keirin and Campbell Stewart in the omnium. And the men’s team pursuit were desperately unlucky not to medal. Even breaking the world record didn’t do it for them.

The New Zealand sailors had to work hard, and though there were a couple of near misses, only the brilliant 49er team of Blair Tuke and Peter Burling medalled, adding a silver to their previous Olympic silver and gold medals.

Lydia Ko was another who returned successfully for another Olympics, following her silver medal in Rio with a hard-fought bronze in Tokyo.

New Zealand didn’t have the best time of it in the sevens in Rio when rugby made its Olympic debut. The men finished in seventh and the women had to settle for silver when they wanted gold. This time the sevens men lifted themselves to silver and the sevens women played superbly to win gold. Few who watched their thrilling extra time semi-final win over Fiji will ever forget that match.

These were a rather different looking Olympics, with new sports such as 3 x 3 basketball, climbing, karate, skateboarding and surfing, and mixed relays in sports such as swimming, triathlon and athletics.

A whole raft of potential New Zealand sports stars introduced themselves on the world stage. Some that linger in our memory:

Anton Cooper was tenacious and attacking in the mountain bike race. His sixth placing could easily have been a medal.

Maddi Wesche, just 22, and in the shadow of Dame Valerie, carved her own path, improving her personal best by nearly a metre in the shot put to finish sixth.

Dylan Schmidt stunned sports followers with his bronze medal in the trampoline, greatly enhancing the sport’s status in New Zealand.

Several swimmers produced personal bests and Lewis Clareburt and Erika Fairweather went even further. Clareburt made two finals and Fairweather, the youngest competitor in the New Zealand team, made a semi-final and a final.

Anton Down-Jenkins was relieved just to qualify for the Olympic diving, but shocked himself by going all the way to the final and taking eighth, a place of honour.

David Nyika waited a long time to get to an Olympics. The heavyweight boxer is twice a Commonwealth Games gold medallist and showed his class by thoroughly earning bronze in Tokyo.

David Liti mixed with the big boys of weightlifting and, far from overawed, achieved a personal best total for fifth place.

While Lisa Carrington naturally took the spotlight, three other paddlers grabbed their opportunity on the Olympic stage. Caitlin Regal, at her second Games, finished ninth in the K1 500, fourth in the K4 500 and helped Carrington to the K2 500 gold medal, and men’s K2 1000 paddlers Kurtis Imrie and Max Brown performed way above expectations against big-name opposition to not only reach the final, but finish fifth.

When Marcus Daniell and Michael Venus won bronze in the men’s doubles tennis it ended a wait of 109 years since a New Zealander – Anthony Wilding – last won an Olympic tennis medal.

Ellesse Andrews was the sensation of the track cycling team. Only 22, she showed power, strength, speed and tactical acumen to claim silver in the keirin.

Hamish Kerr was right at his best to finish 10th in the high jump final.

The New Zealand men’s football team lost their quarter-final match to Japan in the cruellest circumstances, a penalty shootout.

The whole team deserved credit for their plucky performances, but to pick out one name, what about goalie Michael Woud, who had a horror match against Honduras, but fought back bravely and was at his best against Japan. New Zealand kept three clean sheets in their four matches in Japan.