It’s been more than three weeks since Aotearoa went into a nationwide lockdown and while for now Auckland remains at Alert Level 4, the rest of the country has eagerly moved into Alert Level 2.

While traffic decreased nationwide in response to current restrictions, the impact is less than 2020’s Level 4 drop and is promisingly recovering faster.

Auckland’s first full week in Level 4 sat at 29 percent of normal traffic volume (higher than the comparative first week of Level 4 2020 at 23 percent), while its second full week rose back to 31 percent. It is expected that as Auckland moves back down levels its traffic recovery will be swift with OOHMAA forecasting to reach at least 60 percent within a week of entering Level 3. 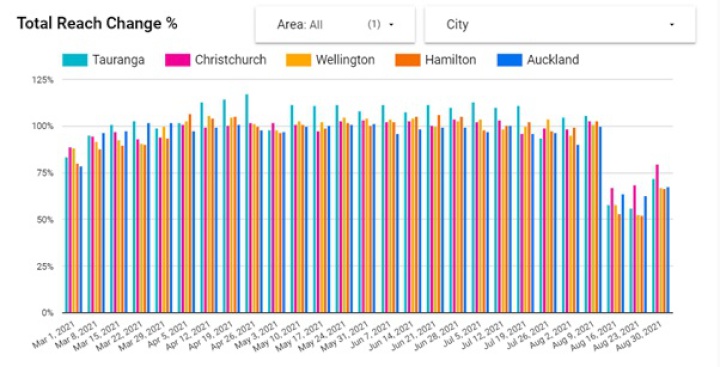 Traffic in reported cities (besides Auckland) was 67 to 80 percent of typical volumes in the first full week of Level 4, while CBDs were between 35 and 65 percent of normal volume.

With no known cases in the South Island, Christchurch jumped quickly back to 80 percent of its normal traffic when it, along with most of Aotearoa, moved to Level 3.

“Aotearoa has done this before, and the data shows it. While traffic has decreased, we anticipate a speedy return to normal as restrictions ease. With the majority of the country now at Level 2, we’ll see people eager to leave their bubbles and return to their everyday routines,” says Natasha O’Connor, OOHMAA General Manager.

The latest information on traffic volume in Aotearoa can be found here.